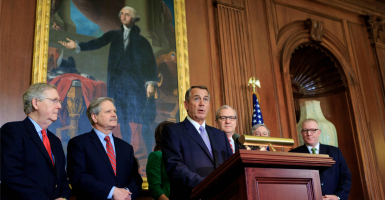 As pressure builds for Congress to increase the government’s borrowing cap, outgoing House Speaker John Boehner is signaling he will do what it takes to prevent a default.

While Boehner is being quiet on his exact strategy, the same House conservatives who pushed him to retire early say they expect the speaker to be careful on the method he uses to clean a “dirty barn” of must-pass issues before he leaves office Oct. 30.

“Legislation to raise the debt ceiling should include reforms that begin the long process of reining in our out-of-control spending,” Rep. Jim Jordan, R-Ohio, chairman of the House Freedom Caucus, told The Daily Signal. “Commonsense reforms that our voters want should be part of any debt ceiling discussion.”

On Thursday, Treasury Secretary Jack Lew moved up the government’s expected default date to Nov. 3, predicting that the Treasury at that point will have only $30 billion per day to pay bills as high as $60 billion per day.

“There is no way to predict the irreparable damage that default would have on global financial markets and the American people,” Lew said.

Boehner is leading high-stakes negotiations with Senate Majority Leader Mitch McConnell, R-Ky.; Democrats; and the White House on a measure to raise the debt ceiling and a long-term deal to fund the government.

While Congress avoided a government shutdown on Sept. 30 by passing a short-term spending deal (which expires Dec. 11), lawmakers are also trying to reach a deal on a longer spending measure that would likely run through the end of the fiscal year in September 2016.

The Republican credo is that by tying those two important issues together, they can extract some concessions from Democrats like spending cuts and entitlement reform in exchange for raising the debt ceiling.

But with Obama insisting he won’t concede much (CNN quoted a White House spokesperson calling Republican proposals to reform Medicare and Social Security “non-starters”), GOP leadership fearful of being blamed for a calamity may feel forced to strike a deal.

Last year, Boehner was one of just 28 House Republicans to go along with a “clean” debt limit increase that did not include any corresponding spending cuts or other concessions.

And on Wednesday, Politico reported that many Republicans see a “clean” debt limit deal as the only realistic option this time.

Making clear that Boehner has not agreed to pursue a clean debt limit deal, a Boehner aide told The Daily Signal that “no decisions have been made, but a resolution on the debt ceiling is certainly possible.”

Though insulated from the pressures of the House’s far-right members because of his lame-duck status, Boehner’s critics are warning him to tread carefully.

In an interview with The Daily Signal, Rep. Mick Mulvaney, a Freedom Caucus founder and one of its 40 or so members, cautioned that he did not want to judge Republican leadership’s strategy before knowing what they intend to do.

But he made his expectations clear.

“A misconception about conservatives the last four years is that we want everything,” said Mulvaney, R-S.C. “We know we won’t get everything we want. We just want something. Our leadership team expects to do nothing and then celebrate. This negotiating strategy of telegraphing surrender doesn’t work.” Mulvaney added that Freedom Caucus members, like everyone, support a raising of the debt ceiling, but in a common refrain, they want to be included in the “process.”

Mulvaney said he would be for packaging a spending agreement with raising the debt ceiling.

“There are many of us in the House Freedom Caucus and elsewhere who want to talk about ways to raise the debt ceiling,” Mulvaney said. “Why we are not having that discussion within the party, I have no idea.”

He even said he would be OK with busting the spending caps imposed by the 2011 Budget Control Act—as Obama has insisted must occur—as long as Republicans were assured reforms to entitlements and “other structural fixes that drive the nation’s debt.”

According to CNN, McConnell, who must win enough GOP votes to get over the Senate’s 60-vote filibuster barrier—is pushing this exact proposal with the White House and Democrats.

However Republican leaders proceed, Boehner’s aide reaffirmed Thursday “that he wants to solve some outstanding issues before he leaves.”

Boehner has argued that by dealing now with things like the debt ceiling, government funding, and transportation spending, a new speaker won’t have to immediately grapple with divisive issues that could weaken him.

But some Freedom Caucus members prefer that Boehner surrender his negotiating position to the next speaker—though the House is unlikely to elect a successor anytime soon.

“I don’t think many members of the House Freedom Caucus trust John Boehner negotiating with Barack Obama,” Rep. Tim Huelskamp, R-Kan., told The Daily Signal. “Somehow we are supposed to expect now that the speaker will be a tough negotiator.”

In 2011, while Boehner was House speaker and a key figure in negotiations, Congress passed a debt limit increase that included $2.4 trillion in spending cuts.

Boehner’s allies expect a speaker known for his pragmatism to go out serving that way.

“Of course we would like to see a spending bill and debt ceiling deal that achieves entitlement reform and other savings,” said Charlie Dent, a moderate Republican from Pennsylvania. “But are we going to be able to achieve that between now and Nov. 3? That’s doubtful. I don’t think there will be time for reforms, so I expect we end up voting on a clean debt ceiling bill.”

Indeed, Dent told The Daily Signal, Boehner should act now because he’s the one with the power to do so—he’s vowed to stay speaker until the House elects a replacement, even if the search goes beyond Oct. 30.

For the hardline Freedom Caucus, Mulvaney says the chance to make a good deal could be the ultimate inspiration for them to fall in line with the rest of the conference.

“For these negotiations, we need a leader who has the full faith of the conference,” Mulvaney said. “If you locked us all in a room on Tuesday [when Congress returns from recess], we would have a new speaker by the end of the night.”