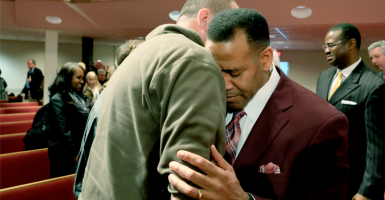 The city of Atlanta made “dangerous” admissions in a court hearing today, argued the lawyer for the former Atlanta fire chief who was terminated from his job after controversy related to a religious book he authored that included his views on homosexuality.

“[The city] actually argued that you’re entitled to have beliefs and opinions, but you have to keep them to yourself, inside the four walls of your house or your church—that you shouldn’t bring them out into the public, and you shouldn’t bring them out if you’re employed by a government agency,” Alliance Defending Freedom senior counsel David Cortman told The Daily Signal.

Cortman is representing former Atlanta Fire Chief Kelvin Cochran, who after working 34 years as a decorated fire chief was fired from his job. Cortman added:

We certainly thought that was an accurate admission in their position in the case but a dangerous one. Imagine telling people that you’re entitled to your own beliefs and opinions but you’re not entitled to share those beliefs and opinions with anybody else. Not only is that a Constitutional violation, but a dangerous proposition for the government to tell others what they cannot say to other folks.

In January 2015, Cochran was fired after publishing and distributing a men’s devotional book for a Baptist church group. In the book, “Who Told You That You Were Naked?,” Cochran addressed issues of homosexuality, gay marriage, and premarital sex from a biblical perspective.

Cochran gave his book to some of his subordinates and fellow employees, all of whom Cochran previously told The Daily Signal he had “established a prior relationship with as believers in Christ.” Eventually, according to court documents, a copy of the book made its way from an employee of the Atlanta Fire and Rescue Department to City Councilmember Alex Wan, who is openly gay.

Atlanta Mayor Kasim Reed subsequently suspended Cochran for 30 days without pay, stating, “I profoundly disagree with and am deeply disturbed by the sentiments expressed in the paperback regarding the LGBT community.”

During his seven years as Atlanta’s fire chief, Cochran was never accused of discriminating against anyone based on race, gender, sexual orientation, or any other protected characteristic.

Although Atlanta Mayor Kasim Reed suggested that Cochran’s suspension was a direct result of the book, his office now argues that the religious nature of the book “is not the reason he is no longer employed by the City of Atlanta.”

Reed’s office did not respond to The Daily Signal’s request for comment, but in a previous statement, they said:

The totality of his conduct—including the way he handled himself during his suspension after he agreed not to make public comments during the investigation—reflected poor judgment and failure to follow clearly defined work protocols.

On Wednesday, Judge Leigh Martin May for the U.S. District Court for the Northern District of Georgia heard oral arguments relating to the city’s motion to dismiss the case, which will decide whether or not Cochran’s lawsuit will move forward.

Cortman, Cochran’s attorney, said he expects the judge to issue that ruling within the next two months.

“If she grants the motion to dismiss and dismisses the case, we would then appeal that decision to the 11th circuit court of appeals and we would argue that the judge made a legal mistake,” Cortman said.

Regarding Wednesday’s hearing, Cochran said in a statement, “All across our country, people of faith are finding themselves increasingly at risk of losing their jobs, their businesses, and more because certain segments of society find them and their beliefs intolerable.”