What the Tea Party Has Achieved 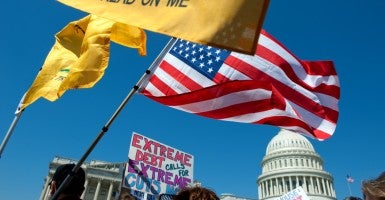 Tea party members on the East Front of the U.S. Capitol hold up signs and flags during a rally.(Photo: Douglas Graham/Roll Call/ Newscom/ Edited: Daily Signal)

Remember the much maligned Tea Party movement? These were the patriotic Americans—millions of them—who took to the streets and the town halls across America and revolted against President Bush’s corporate bailouts, President Obama’s stimulus spending blowout and Obamacare, and the Federal Reserve’s policy of tossing trillions of dollars out of helicopter windows (figuratively).

Good news: They helped change and maybe even slightly fix America. The latest budget deficit numbers for the fiscal year just ended find that the deficit has fallen by $1 trillion since Obama’s tragic first term. The deficit is still near half a trillion, but the hole is a lot smaller than it was before the Tea Party spontaneous combustion happened back in 2009.

This was a movement about saving America from itself. Tea Party members are homemakers, veterans, small business owners, retirees, college students, and blue-collar workers. They generally don’t want anything from government. At the 9-12 rally in Washington a few years ago, an activist from Florida explained to me what his goal was: “All we want from government is less of it.” They wanted a lot less of it from a president and a Congress who kept dispensing trillions more.

The media portrayed the Tea Party as a spoiled three-year-old throwing a temper tantrum. The left pilloried these patriots, offensively calling them “Tea Baggers” and racists and crazies.

But who was crazy? In two years, 2009 and 2010, Barack Obama and his accomplices then-House Speaker Nancy Pelosi, D-Calif., and then-Majority Leader Harry Reid, D-Nev., managed to borrow about $2.5 trillion. These fiscal three stooges called this volcano of debt a stimulus to the economy. It didn’t work, and the unemployment rate was higher than it would have been without the borrowing blitz—by their own admission.

This is all the more impressive because government spending for Obamacare is soaring. This means that every dollar that has been spent on this new entitlement program has been offset by a dollar of cuts elsewhere.

It’s also worth giving credit to retiring House Speaker John Boehner, R-Ohio. It was Boehner who forced Obama to accept tight spending caps as part of the fiscal cliff budget deal. This was one of the best deals taxpayers have seen in a long time. Boehner refused to accept Obama’s tax hike proposals, which could have plunged the economy back in to recession.

The budget numbers of the U.S. government are, of course, still dire. The debt has toppled $18 trillion, and soon we will bump up against another debt ceiling, with the spending lobby demanding an increase in the congressional credit card. But at least we are not Greece or Detroit: we are off fiscal life support for the time being.

Alas, we may need the Tea Party to take to the streets again. Republicans are set to negotiate a budget deal with the White House that could bust through budget caps and spend an extra $75 billion, which will reverse hard-earned progress.

Rep. Tom Price, R-Ga., the House Budget Committee chairman and a consistent fiscal superstar for taxpayers, is fighting to keep the spending tides from crashing over the budget act ceilings, but he’s outnumbered even inside his own party. In Washington, the urge to play Santa Claus is still truly bipartisan.

Let’s hope the history books get the Tea Party chapter right. These weren’t a bunch of angry white males organized by the Koch brothers to protect industry. This was and still is a save-America crusade as impactful as the Civil Rights movement of the 1960s and the anti-tax activism of the 1970s. They arrived just in time, and America still needs them.