Abortion Survivor to Cecile Richards: ‘I Am So Thankful to Be Alive’ 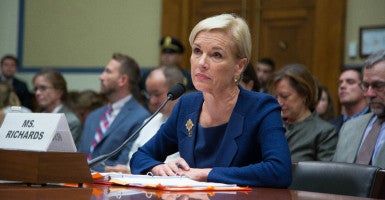 Gianna Jessen wasn’t supposed to live. But she did.

Born alive after her biological mother’s botched late-term abortion at a California Planned Parenthood clinic, Jessen was rushed to a hospital after a nurse called 911.

In an interview with The Daily Signal, Jessen, now a pro-life speaker and activist, said that abortion supporters must deny her existence in order to make their case.

“I’ve been around for a little while, and they are very much aware of what I do,” Jessen said. “The very last thing in the world they want is to hear from people who survive abortion.”

Jessen was the victim of a failed saline abortion at seven and a half months’ gestation, during which she burned alive in her biological mother’s womb for 18 hours.

After she was rushed from the clinic to the hospital, doctors said she wouldn’t live. But she did.

Jessen was later diagnosed with cerebral palsy, which doctors told her was a result of the lack of oxygen she suffered during the abortion attempt.

The doctors said she would never walk or even hold up her own head. But she did.

“So much of it is mindset,” Jessen said. “I do not care if I have to crawl to heaven; I will not surrender.”

Jessen has even completed two marathons, which she ran on her toes—the only way she knows how.

“I will complete the race that is my life,” Jessen said.

She recently testified during a House Judiciary Committee hearing regarding Planned Parenthood.

“I speak from the heart, and reading speeches can be difficult, but it turned out to be such a phenomenal day,” said Jessen.

But a few weeks later, Cecile Richards, Planned Parenthood’s chief executive, testified during a House Oversight Committee hearing that she had “never heard” of a baby surviving an abortion attempt.

“I’ve never heard of such a circumstance happening,” Richards said.

Pressed by lawmakers for clarification, Richards added, “In my experience at Planned Parenthood, we haven’t ever had that kind of circumstance.”

Jessen said she is living proof that babies can survive botched abortions.

“You cannot refute what I am saying, because I’ve lived through it,” Jessen said. “She has no problem lying. Is there any consequence for that?”

@CecileRichards here are my medical records. ” born during saline abortion.” you know. you don’t want it to be True. pic.twitter.com/9dx2TPQD15

Jessen said she is “unashamedly a Christian.”

“How can I be embarrassed by a Jesus who shielded me, who saved my life?”

She emphasized that she has forgiven her biological mother.

“I know many women and men who will read your article have been involved in abortion,” Jessen said. “I want them to know that I want them to forgive themselves. I have forgiven my biological mother. I am so thankful to be alive.”

She even called her disability “a treasure.”

She credits her success to God and to her foster mother, Penny, who, when told by doctors that Jessen would be a “vegetable,” decided to “politely smile and ignore them all.”

“Can you imagine how horrible I must feel when people say if a baby is disabled the pregnancy should be terminated? I’m disabled because of abortion,” Jessen said.

Jessen said there should be a “national outcry” over the “atrocities” committed by Planned Parenthood. She called for lawmakers and those with influence “to be courageous.”

“These people vowed to fight these atrocities. Some care more for their position than the blood of innocent children. It is time that they wake up out of passivity.”

yes, i Lived ( as others have) through a thing we never want to see. so why don’t we stop it? pic.twitter.com/OIxx1NkVKj — Gianna Jessen (@giannajessen) September 6, 2015

You can read more about Gianna and receive updates about her work through her website.