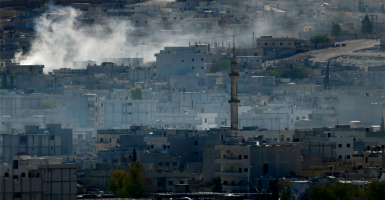 After the grim announcement last month that only four or five Syrian rebels trained by U.S. military personnel remained inside Syria, the Obama administration has decided to call it quits on the program altogether. There were supposed to be roughly 5,400 trained fighters this year and 15,000 within 3 years in order to effectively combat ISIS in Syria.

While some Defense Department officials have masked the ending of the operation as “an operational pause,” others have confirmed that the program has been halted and may soon be replaced by a smaller program focused on supporting existing rebel forces fighting ISIS, rather than creating new ones. A covert CIA program to train Syrian rebels has been more successful. But after a pricey $500-million expenditure, it’s easy to see why so many observers are disgusted with yet another Obama foreign policy failure.

The failure of the Pentagon’s plan to train the rebel groups has been looming for months; even Secretary of State John Kerry acknowledged in February that the president needed a better—or different—strategy in the region. The administration’s feckless policy in Syria and its initial dismissal of the threat that ISIS poses to the West, and particularly to America, is proving to be one of President Barack Obama’s most costly strategic blunders. As the Islamic State recruits more foreign fighters and gains more territory, it becomes harder for Obama to simply write off the radical terror group as he has done so many times before.

In addition to the mushrooming humanitarian catastrophe inside Syria and the flood of millions of Syrian refugees, the White House’s passivity emboldened Vladimir Putin’s Russia to actively intervene in the crisis. To make matters worse, Russian warplanes have launched airstrikes targeting rebels whom the U.S. is trying to support, while Russian officials are falsely claiming that their attacks are aimed at ISIS. Putin’s actions in Syria have further raised the costs and risks of Obama’s hapless foreign policy. Obama’s inaction has provided an opportunity for Putin to seize the initiative and exploit the deteriorating situation to establish Russian presence in the region, as well as affirm Russia’s alliance with Syria and Iran.

There has been heavy criticism of the equip-and-train program in recent months, with mounting pressure from Congress. The hesitant halfway measures that have been dispensed by the Obama administration in its efforts to address the Syrian crisis have achieved minimal benefits.

The Obama administration will mask the suspension of the program with a cloud of rhetoric, but the facts remain clear. The Pentagon’s plan to train the rebels has been a disaster from the start, complete with zero accountability on behalf of the government. The formal end of the Pentagon’s program to train Syrian rebels is just an example of the Obama administration’s true foreign policy legacy: one empty promise after another.