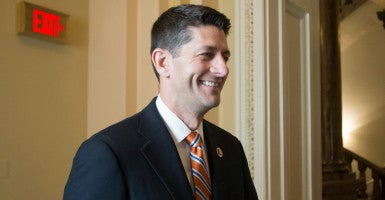 Republicans have begun an all-out courtship for Rep. Paul Ryan, R-Wis., to run for speaker of the House. (Photo: Michael Reynolds/EPA/Newscom)

After a band of conservatives undercut Kevin McCarthy’s assumed ascension to speaker of the House, Republicans turned to the only person they see as indestructible: Paul Ryan.

Though Ryan has so far resisted the persistent pleas of his counterparts (he is said to be taking the weekend to make a final decision, according to The Washington Post) the force could be too strong.

Indeed, even the 40 or so members of the conservative House Freedom Caucus may be reluctant to block a Ryan speakership.

“If Paul Ryan enters the race, it will make it a much quicker race,” said Rep. Mark Meadows, who led the effort to oust Speaker John Boehner, R-Ohio, and helped found the Freedom Caucus.

“Regardless of how he may or may not stand up on some conservative lists, you would be hard-pressed to have a vice presidential nominee not be considered enough of a candidate to be speaker of the House. If you voted for him for the second highest position, certainly voting for him as the third highest position would be difficult to make an argument against.”

In an interview with The Daily Signal on Friday, Meadows, R-N.C., said the Freedom Caucus would have a formal conference call over the House’s upcoming week-long recess to discuss Ryan specifically.

A day after the Freedom Caucus vowed to stand by long shot Rep. Daniel Webster, R-Fla., Meadows made clear a Ryan run would change the equation.

“There are a number of my colleagues who certainly respect Paul Ryan and consider him to be a credible candidate for the speaker’s job,” Meadows said.

“I believe there was still a path for McCarthy to be the speaker, so suggesting that Ryan would be opposed by the Freedom Caucus is not really along the lines of where ultimately this election may lead.”

Meadows took it a step farther and said the Freedom Caucus was willing to support McCarthy, R-Calif., on the House floor—and would do the same for Ryan.

“The fact the Freedom Caucus endorsed Dan Webster for that first ballot—because it was such a fluid situation—doesn’t necessarily mean we would have stayed firm on that. We have individual areas we want addressed, whether it’s by Dan or someone else.” On Thursday, McCarthy stunned Congress by quitting a race he was favored to win, a day after the Freedom Caucus promised to unite as a bloc and support Webster during a private vote of the GOP conference.

McCarthy was expected to win more than enough votes to become the party’s speaker nominee.

But to earn the 218 votes required to actually become speaker during a more important vote before the full House, McCarthy knew he would have to win over the Freedom Caucus—and potentially weaken himself by bowing to their demands.

Meadows on Friday said the Freedom Caucus has not changed its expectations.

Conservatives still want a more open legislative process, where rank-and-file lawmakers can put bills and amendments on the House floor and have a larger say in picking committee chairmen.

“The biggest key for most of the Freedom Caucus members has been consistent—it  was consistent with McCarthy and would be the same with Chairman Ryan,” Meadows said. “Let’s try to find a way to bring unity with policies and procedures that allow the average member of Congress to be empowered and to focus on some of the other ideological issues.”

But Meadows didn’t expect those demands to trip up Ryan, known by many as the House’s chief policy wonk and as Mitt Romney’s running mate in 2012.

Ryan, 45, chairs the House Ways and Means Committee, where he harbors dreams of reforming the tax code, and he chaired the Budget Committee for four years.

“The biggest concern that a number of us probably would have is what kind of damage would his moving to speaker do to getting comprehensive tax reform we all want, and other issues he has been involved with as Ways and Means chair,” Meadows said.

“Any reluctance to move him to speaker would be more predicated on a potential lack of focus on other issues that are important to our country.”

Those who know Ryan well say he could actually make more of an impact on policy as speaker.

Cesar Conda, the former chief of staff to Sen. Marco Rubio, R-Fl., has known Ryan since he was 20 years old.

Paul, while still in college, interned for Conda in 1991 when he worked for former Sen. Bob Kasten, R-Wis. Conda introduced Paul to Romney in 2007.

“Paul has already done the hard work on crafting blueprints for repealing and replacing Obamacare, reinventing our anti-poverty programs, modernizing Medicare and Social Security, and revamping our tax code,” Conda told The Daily Signal. “As speaker of the House, working with a Republican president, he would be in a far better position to make his ideas become law.”

Still, during Republicans’ all-out courtship of Ryan, which has reportedly included pleas from Boehner, Romney, and McCarthy, among others, the Wisconsin Republican has insisted he’s not interested.

Some Republicans, like Rep. Charlie Dent, R-Pa., are hoping for Ryan to save them but realistic about what he could accomplish.

Dent, a moderate Republican, fears that Ryan, or any candidate, would get himself into an unwinnable situation by trying to appease the Freedom Caucus.

“He understands the challenge: that the governing dynamics remain the same. The issue is not getting elected speaker. The issue is what you can actually do when you get there.”

With pressing issues due to be addressed before the new year, Dent worries that the new speaker will be caught between trying to make a deal and pleasing conservatives whose demands may be difficult to meet.

“We have to deal with pressing issues like the debt ceiling, the budget, and transportation, and all will require some level of bipartisan support in order to act,” Dent said.

“To the extent the new speaker enters into a new bipartisan agreement, they will likely get a lot of flak. If he [the next speaker] chooses the path of appeasing the rejectionists—facing the firing squad—we are spinning our wheels, and that’s not a good place to be. That’s the conundrum we are dealing with here.”

Two years ago, Ryan and and Sen. Patty Murray, a Democrat from Washington state, helped avoid a government shutdown by shepherding a bipartisan bill that relaxed some of the spending limits that had been imposed in the 2011 Budget Control Act.

Some conservatives opposed the 2013 agreement, arguing that it didn’t go far enough in cutting spending.

“Paul Ryan has voted for every bailout, TARP, No Child Left Behind, etc.,” Erick Erickson, the columnist and radio host, wrote on Friday. “He is a team player and conservatives in Washington cannot afford to be on Team D.C.-GOP when the American people are mad as hell at Washington.”

Other Republicans are optimistic that Ryan can overcome policy disagreements because of his intellect and boldness in addressing conservative issues.

“In my four years in the [New York] state Senate and in this first year in Washington, I haven’t seen one individual command that much respect from his peers,” said Rep. Lee Zeldin, a freshman Republican who is friends with Ryan.

In an interview with The Daily Signal, Zeldin commended Ryan’s work ethic and ability to work with Democrats and conservatives.

“Regardless of whether you agree or disagree with his policy positions, I have never seen anything like the respect he commands,” said Zeldin, R-N.Y. “He has a certain star power that comes from being the party’s vice president nominee.”

Rep. Mike Kelly, a Pennsylvania Republican, said Ryan could unite the different factions of the conference better than anyone.

“I don’t think there is anybody right now better to lead us than Paul Ryan,” said Kelly, who works with Ryan on the Ways and Means Committee.

“He cuts across all questions people have. He is a strong, strong person with great faith and is a very loving husband and father. He is man for all seasons, and if he runs, he is the man for all the right reasons.”

Even if he is the right one by consensus, Ryan has to want it back.

As Republicans wait, other potential candidates have emerged.

Webster and Utah Rep. Jason Chaffetz, who has vowed to drop out if Ryan runs, are also still in the race.

But it’s unclear if any of the alternative candidates could attract the 218 votes needed to win.

For now, Republicans are in limbo, which they insist is not the worst place to be.

“There is no chaos or insurrection,” Kelly said. “We have gotten through a whole lot of tougher things than this. I don’t think America is fixated on who the speaker of the House is going to be. We will still be working on the issues people are concerned with.”

Kelly, turning philosophical before heading into a week of reflection, added:

“I really think there is a calmness in the House when it comes to doing the people’s business. We will get through it. I believe the hand of God is with us and people around the world wish they had the governing system we have.”