Skeptical Climate Change Is Real? These 20 Academics Think You Should Be Prosecuted. 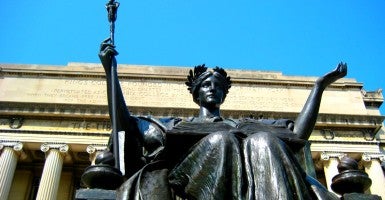 Are you skeptical of human-caused global warming or climate change like many respected scientists and climate experts? Then you should be prosecuted like a Mafia mob boss, according to 20 academics at ivory towers like Columbia, Rutgers, and the University of Washington.

Apparently, these professors either don’t believe in the First Amendment or are profoundly ignorant of the basic rights it protects. They recently wrote an open letter to President Barack Obama and Attorney General Loretta Lynch asking for anyone who questions the climate-change dogma to be criminally prosecuted under the Racketeer Influenced and Corrupt Organizations (RICO) Act because they have “knowingly deceived the American people about the risks of climate change.”

RICO is a federal law passed in 1970 as part of the Organized Crime Control Act that was intended to be used as a tool to go after organized crime, including dangerous drug cartels and Mafia operations.

The letter writers believe that any individuals and organizations involved in questioning the “science” behind global warming are the equivalent of the racketeers the RICO law was supposed to stop—racketeers like the kind Marlon Brando portrayed as Vito Corleone in “The Godfather” (1972) or Edward G. Robinson played as Enrico “Rico” Bandello in “Little Caesar” (1931). In fact, the acronym for the federal law, RICO, comes from that Edward G. Robinson character.

The professors seem totally oblivious to the fundamental infringement of free speech they are urging. Not only that, but they seem completely insensible to the basic mission of academic institutions, which is to foster, as the University of Washington (where two of the academics who signed this letter teach) mission statement says: “an environment for objectivity and imaginative inquiry and for the original scholarship and research that ensure the production of new knowledge in the free exchange of facts, theories, and ideas.”

These academics are trying to foster the exact opposite of a “free exchange of facts, theories, and ideas.” They want to end all scientific debate.

These academics could also use a remedial course in the history of scientific development. There have been many fierce debates over new scientific theories that have occurred over the past 2,000 years of human development, and there are countless examples of theories that became accepted wisdom that later turned out to be completely wrong, in which dissenters from the original “accepted wisdom” were greeted with a range of reactions from skepticism to derision. Suggesting, however, that so-called dissidents on the climate issue be prosecuted is a whole different story and amounts to a modern-day academic Inquisition.

Have these professors never heard of Galileo Galilei? Galileo was attacked by the Inquisition for advocating the Copernican theory of the universe, which violated the consensus of the times.

These academics want anyone who disagrees with their “absolute” truth to be prosecuted, just like Galileo. Should the skeptics be put in prison? Or would these professors be satisfied with the skeptics being confined to house arrest and formally abjuring their errors like Galileo?