Putin Is Not a Child. Obama Should Stop Treating Him Like One. 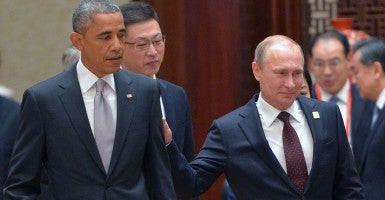 The White House likes to portray the Kremlin as a place filled with petulant children who don't understand what's in their own best interest. (Photo: MetzelMikhail/ZUMA Press/Newscom)

The White House likes to portray the Kremlin as a place filled with petulant children who don’t understand what’s in their own best interest and will one day rue their misguided behavior. A mixture of condescension and patience may be an appropriate tactic in childrearing. But in a dangerous world, it’s a lackadaisical prescription for disaster.

Obama sees Putin’s military adventure as a quagmire-in-waiting for the Kremlin. In the end, he believes, Moscow will lose more than it gains and find itself isolated and censured by the international community. This, he concludes, will leave Putin weaker than when he started.

But there’s a problem with the president’s line of thinking. Actually, there are several.

First, there is no reason to believe that just because entering a hot war in Syria is a bad idea, Putin won’t pursue it with single-minded determination. After all, that is exactly what the Russian strongman did in Ukraine. Back then, Obama said it was a mistake and Putin would pay a price. And Putin did. The West tsunamied Russia with sanctions.

The problem is, Putin hasn’t stopped. He is still meddling in Ukraine. He’s also messing with Georgia. In fact, most Central European countries are on Russia watch.

Second, powers inclined to “act out of weakness” can take some very dangerous and destructive steps when undeterred.

That’s what happened Dec. 7, 1941. Japan attacked Pearl Harbor out of weakness. It was a foolish and risky overreach that eventually doomed the fortune of the Axis powers. But that’s cold comfort for the 2,403 who died in the attack and the millions who had to go to war to make things right.

Sometimes it might make sense to give some actors space to “learn their lesson.” But it’s simply irresponsible to let dangerous powers run amok in dangerous places, responding only with assurances that everything will work out in the end.

In fact, Putin is using Syria as a distraction to get Europe and the U.S. to back off on countering Moscow’s mischief in Ukraine. In the Kremlin’s calculus, the best follow-up to bad behavior is…more acting badly.

The White House, of course, can’t really keep Moscow and Tehran from propping up Syrian not-so-strongman Bashar Assad if that is what they really want to do. In fact, Obama has effectively encouraged them to do so by negotiating at least $150 billion in sanctions relief for Iran—money that Tehran can use to bankroll the effort.

And let’s face it: the Syrian civil war is going to get worse. The U.S. lacks a compelling vital interest that demands we solve the problem. Nor does it make much sense to fight it out with Moscow and Tehran over Damascus.

Instead, the White House should be taking reasonable steps to keep the region from getting worse: bolstering allies on the front line, working with the Europeans to stem the flow of refugees, defeating ISIS, and marginalizing Russian and Iranian influence in the region.

The president has a long Middle Eastern and European to-do list. But that’s largely the result of his failed foreign policy, which has helped empower all the wrong people while offending our best friends.

Obama has a little over a year to make amends. He needs to get started now.