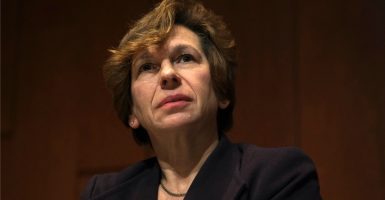 AFT paid union president Randi Weingarten, one of the nation’s most prominent “progressive” activists, a total of $497,118. (Photo: Jesse Nemerofsky/ZUMAPRESS/Newscom)

The 2015 American Federation of Teachers annual report shows a left-wing political machine humming on all cylinders—with teachers buying the gas.

For the fiscal year ending June 30, the union reported $37.6 million in political activity and lobbying expenditures, a $12.7-million increase from the previous year.

AFT paid union president Randi Weingarten, one of the nation’s most prominent “progressive” activists, a total of $497,118. The union reported only 2 percent of her time as political activity.

In many states, teachers can be required to pay AFT to have a job. Even though mandatory union fees can legally be spent only on representation, the power to take money from non-members frees AFT to spend more member dues on politics.

Millions of dollars of AFT payments to other political groups weren’t reported as political spending, including $300,000 in donations to Economic Policy Institute and $160,000 to National Public Pension Coalition.

The union spent millions more on membership recruitment drives throughout the country, with $7.7 million in payments to “organizing projects” reported to the Department of Labor as representation costs.

Hundreds of thousands of teachers are stuck paying AFT, regardless of whether they agree with the union’s spending and activism. Friedrichs vs. California Teachers Association, a case before the Supreme Court, could change that within the next year.

If the Supreme Court sides with the plaintiffs in the Friedrichs case, it could end mandatory union fees for all public-sector workers.

AFT may come to regret “doubling down on a highly controversial political agenda,” Gary Beckner, chairman and president of the Association of American Educators, told Watchdog.

“Teachers have had enough and are searching for affordable, professional alternatives” like AAE, Beckner said. “Teachers deserve an organization that supports the modern educator—without the politics.”

AFT’s Washington, D.C., headquarters did not respond to a request for comment on the spending disclosed in the union’s 2015 annual report.