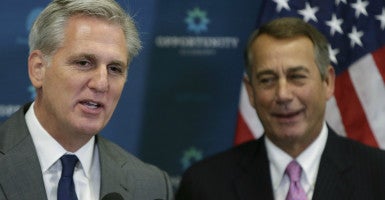 What difference can around 40 votes make? In the case of who will be the next speaker of the House of Representatives, it turns out, quite a big one.

When the House Freedom Caucus, which consists of around 40 House members, announced Wednesday that it would support Rep. Daniel Webster, R-Fla., that meant the frontrunner, Rep. Kevin McCarthy, R-Calif., would likely fall short of the 218 votes he needed in the full House vote, which had been scheduled for later this month.

So, while 40 votes, give or take, isn’t enough to make someone the next speaker of the House, it is enough to ensure that someone won’t be.

And in this case, that someone is not just McCarthy, but more what and whom he is seen as representing—namely, the Washington and GOP establishment.

McCarthy dropped out of the race because conservative voters and grassroots have had it. They are frustrated with politicians who have made promises and not kept them, and they have lost patience with the “go along, get along” Republican leadership that has done nothing to change the culture in Washington.

You will hear over the coming days by sages of the political class that those responsible for John Boehner stepping down and McCarthy dropping out simply “don’t understand how to govern.” They will lament “what a mess things now are.”

After all, there is a debt limit to be raised (because an $18-trillion deficit isn’t big enough) and a budget deal (that continues to fund Planned Parenthood) to be made and a highway bill (that doesn’t pay for itself) to be passed!

Never mind that that is not at all the kind of “governing” voters who put Republicans in charge of Congress had in mind when casting their ballots in November of 2014. On issue after issue, from challenging President Barack Obama’s executive amnesty moves to repealing Obamacare to ending taxpayer funding for Planned Parenthood, Republican leadership has continually failed to fight the good fight.

Yes, Obama regularly makes veto threats and talks about his phone-and-pen strategy, but the fact that he has been forced to issue only four vetoes doesn’t show how strong he is. Instead, it shows how weak the GOP has been, how consistently the party has refused to battle with Obama

When announcing his decision to drop out, McCarthy said, “I just think it’s best we have a new face.”

Actually, what would be best is for House Republicans to elect a leader who will do what their constituents elected them to do: stand up for conservative principles and stop ceding victories to Obama before even engaging in battle.

The choice House Republicans make about the next speaker will go a long way in determining the choice conservative voters make in the next election. If they hope to keep their majorities in Congress, they had best choose wisely.