Former Planned Parenthood Patient Tells Congress It Should Be Defunded 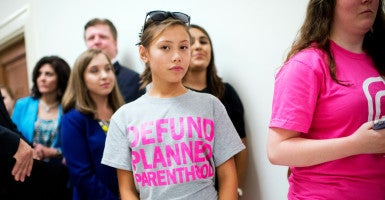 A post-abortive woman testified before a House Judiciary Committee hearing on Planned Parenthood Thursday that she regrets her abortions, and that she believes that the nation’s largest abortion provider should be defunded.

Luana Stoltenberg told the committee her life “has been devastated by abortion.”

A teenager when she had her first abortion, she was too scared to tell her parents she was pregnant, and her boyfriend “didn’t want a baby.”

She made an abortion appointment at a Planned Parenthood clinic. Before the procedure, a nurse asked her how she felt. Stoltenberg told her she was nervous.

“She told me it was just a blob of tissue,” said Stoltenberg.

Stoltenberg said she thought the “adults” in the clinic were “trusted medical professionals,” and so she underwent an abortion.

She was told that an abortion was safer than carrying the pregnancy to term, and she would only feel a slight “cramping” during the procedure.

She was not given any anesthetic.

“It was the most extremely painful procedure I have ever had done,” Stoltenberg said.

In severe pain following the procedure, Stoltenberg called the clinic for help.

“They told me that this was no longer their problem.”

Too scared to call her regular physician out of fear her parents would discover what she had done, Stoltenberg was left alone to deal with the pain.

The abortion, she said, “didn’t solve any of my problems. It only created new ones and larger ones.”

“The happy, fun-loving Luana did die that day along with my baby.”

Eventually, Stoltenberg was able to find “hope and forgiveness in Jesus,” married “a wonderful man,” and tried to start a family with him.

But physical damage from the abortions left Stoltenberg infertile.

“I was angry that they didn’t give me all the facts and let me make the ‘choice’ for myself,” she said. “I thought they were ‘pro-choice’ and cared for women. I didn’t feel cared for. I felt used and I felt abused.”

Stoltenberg said that the clinic workers at Planned Parenthood didn’t tell her about fetal development or the risk of physical harm a woman can suffer during an abortion.

“They didn’t tell me that my unborn baby that they were ripping out of my body would have arms, would have legs, have a heartbeat, fingerprints, and she could feel pain. Why wouldn’t they want to tell me that? Were they afraid that I would change my mind? It must have been a wrong choice, if knowing all the facts, I had chosen life for my child.”

She called for the nation’s largest abortion provider to lose its taxpayer funds.

“All of us who have been hurt by abortion are being made to pay Planned Parenthood with our tax dollars,” Stoltenberg said. “You know, that’s like being forced to pay your abuser over and over again,” she said. “Abortion is not health care. It is the taking of an innocent life.”

The hearing was in reference to “medical ethics” at Planned Parenthood following the release of a series of undercover videos by the Center for Medical Progress depicting Planned Parenthood executives discussing the sale of aborted fetal body parts.