Kevin McCarthy Drops Out of House Speaker Race: ‘It’s Best We Have a New Face’ 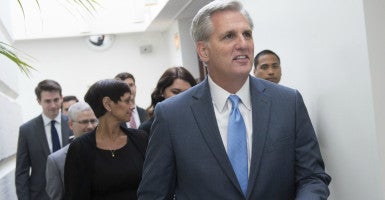 Rep. Kevin McCarthy, R-Calif., has ended his bid to become the next speaker of the House of Representatives.

McCarthy, the current House majority leader, was the leading candidate among three Republicans seeking the top job of speaker. However, he lacked the 218 votes needed to win a vote on the House floor after the conservative House Freedom Caucus endorsed Rep. Daniel Webster, R-Fla. Rep. Jason Chaffetz, R-Utah, is also running for the job.

“I am not the right person to lead at this moment,” McCarthy reportedly told Republican colleagues at a meeting today. He elaborated at a press conference in the afternoon.

“I don’t want to make voting for speaker a tough one,” McCarthy said. “I don’t want to go to the floor and win with 220 votes. I think the best thing for our party right now is that you have 247 votes on the floor. If we are going to be strong, we have to be 100 percent united.”

He added: “I just think it’s best we have a new face.”

We're public servants. I have always put this Conference and Country ahead of myself. We need to unite behind one leader and get to work.

McCarthy’s decision forced Republicans to postpone today’s speaker election. Speaker John Boehner, who plans to resign Oct. 30, said in a statement that he would stay on as speaker until a new person is chosen. The speaker does not have to be a member of Congress.

The news apparently stunned House members who were in the room with McCarthy. Rep. Darrell Issa, R-Calif., spoke to reporters afterward to explain what happened. Issa said McCarthy would like to remain in the majority leader post.

Chaffetz, who currently leads the House Oversight and Government Reform Committee, told reporters he remains a candidate for speaker.

“We need to have a lot more family discussion because we need to find somebody that our whole body can unite behind, and do what we were elected to do,” Chaffetz said. “I was absolutely stunned, surprised, and shocked that this happened, but our conference is going to have to do a lot of deep soul-searching and we’ll see what happens.”

Webster, who has the backing of the 40-member Freedom Caucus, stressed that he would remain committed to improving the way the House operates.

“A lot of members would like to see us modify in some way the rules and then use them,” Webster said. “Right now we don’t use our rules. We circumvent them every day, and that’s the problem.”

Several Republicans voiced their reaction to the McCarthy news on Twitter:

. @RepPaulRyan (paraphrased) "I'm grateful for the support I've received in the last 4 seconds, but I'm STILL out."

We must unite this great party and stand for principles and fight for our convictions.

My reaction to Kevin McCarthy's decision to withdraw from the race for Speaker: pic.twitter.com/JAz2gNB9TQ

I am warming to the idea of an "Interim" or "caretaker" Speaker to serve thru the rest of this term. Someone who has announced retirement.

The House of Representatives needs to be led by a principled, conservative leader. I will continue to work to ensure that happens.

Eager to elect a Speaker who will work w/ me, & all colleagues, to advance a common sense, conservative agenda. Common sense =operative word

Conference is split.We cant rearrange the chairs.Need a fresh start.Clamor for a strong leader that can unite GOP & stand up to POTUS.

Kevin did what he thought was best for the GOP Conference, which surprises no one who knows him.

Democrats, who likely will support House Minority Leader Nancy Pelosi for speaker, used the opportunity to attack their political adversaries.

.@HouseGOP job description for Speaker reads: "Must not be willing to play nice w/ others. Catering (to far right) experience required."

(4) I hope that a Republican w enough support among Rs and a willingness to work with Ds will emerge that we can consider supporting.

Rep. Paul Ryan, R-Wis., who was going to nominate McCarthy at today’s meeting, reiterated he would not seek the job himself:

Kevin McCarthy is best person to lead the House, and so I’m disappointed in this decision. Now it is important that we, as a conference, take time to deliberate and seek new candidates for the speakership. While I am grateful for the encouragement I’ve received, I will not be a candidate. I continue to believe I can best serve the country and this conference as chairman of the Ways and Means Committee.

Another Republican, Rep. Trey Gowdy of South Carolina, said he was uninterested in the job.

Gowdy currently leads the House’s Benghazi investigation, which became an issue for McCarthy after he suggested the probe had hurt former Secretary of State Hillary Clinton’s poll numbers. McCarthy apologized for his comments and told reporters Thursday those comments were a factor in his decision.

At the monthly Conversations with Conservatives event Wednesday on Capitol Hill, The Daily Signal interviewed lawmakers about their expectations for the next speaker:

In the lead-up to today’s meeting, the Freedom Caucus, credited with pressuring Boehner to retire early, vowed to band together as a group and vote for Webster as a powerful voting bloc.

Rep. Dave Brat, R-Va., mentioned upon leaving the meeting that “everyone’s surprised” by McCarthy’s decision and reiterated that the Freedom Caucus, and other conservatives, are calling for a more open legislative process. In such a process, rank-and-file lawmakers could put bills and amendments on the House floor and have a larger say in picking committee chairmen.

“I don’t view it that way [as a victory],” he added. “I want the conference and the country to make progress.”

Brat noted that several policy issues confront Congress, including a debate over the debt limit, government spending, and Russia’s airstrikes in Syria.

“It was about principle over power,” King said, “It was about overhauling this House, and turning this pyramid of power upside down, and letting the members be in charge, and running things through the regular order.”

Gohmert, who challenged Boehner for speaker in January, added: “We need a speaker who allows the members of the House to participate.”

Melissa Quinn and Josh Siegel contributed to this report.