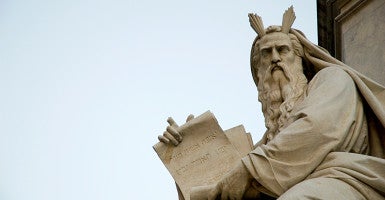 A monument of the Ten Commandments was removed from the Oklahoma State Capitol grounds Monday night after being ruled unconstitutional by the Oklahoma Supreme Court. (Photo: iStock Photos)

The monument of the Ten Commandments that previously stood on the Oklahoma state capitol grounds was removed late Monday night.

According to the Associated Press, the state paid a contractor $4,700 to remove the monument following the 7-2 decision by the Oklahoma Supreme Court on June 30 that found the monument in violation of the Oklahoma Constitution.

Tulsa World reported, “The plaintiffs said its placement at the capitol constituted the use of public property for the benefit of a system of religion, which is banned by the Oklahoma Constitution.”

Office of Management and Enterprise Services spokesman John Estus explained to the AP why the monument was removed during nightfall:

We wanted it to be done as quickly and efficiently as possible, and doing it at night gave us the best opportunity to do that. The Highway Patrol was also very concerned that having it in the middle of the day could lead to having demonstrations of some kind.

Oklahoma Gov. Mary Fallin previously stated that the monument would remain on state capitol grounds. Fallin’s desires did not come to fruition, as the court recently rejected a reconsideration request from the state and Oklahoma Attorney General Scott Pruitt regarding the ruling.

The upheaved monument will now be housed on private property by the Oklahoma Council of Public Affairs, a private conservative think-tank.

The Ten Commandments monument has ignited controversy since former Oklahoma Gov. Brad Henry signed a bill in 2009 allowing it on the state capitol grounds.

According to the Associated Press, “State Rep. Mike Ritze, R-Broken Arrow, introduced the bill and said he would use family funds to pay for the $10,000 cost of the monument.”

The establishment of the monument spurred requests from other religious organizations to have their own monuments erected. These organizations range from a satanic church to the satirical Church of the Flying Spaghetti Monster.

NewsOK published a piece by Ritze on July 8 regarding the outcome of the Supreme Court opinion.

Ritze described this decision as “woefully inadequate and embarrassing for the state’s legal profession.”

“The court devoted merely seven paragraphs to explain its decision[.] … Never has the Oklahoma Supreme Court ruled against a passive display with religious content. In Meyer v. Oklahoma City, for example, the court found a 50-foot lighted cross sitting on public property to be lawful under the same part of the Oklahoma Constitution it used to strike down the Ten Commandments monument.”

The removal has satisfied the ACLU of Oklahoma, which has consistently advocated for its removal and filed the lawsuit on behalf of four plaintiffs.

The legal director of Oklahoma ACLU, Brady Henderson, told The Oklahoman, “Obviously we’re pleased with the decision. The whole case is controversial, but something that is undeniable is that the court is getting this right. The court is following the law.”