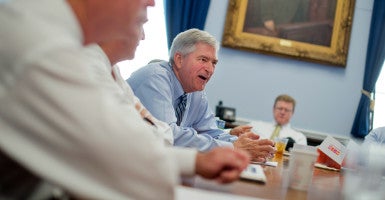 The conservative House Freedom Caucus threw a wrench into the race for House speaker late Wednesday when members vowed to unite as a powerful voting bloc to endorse long-shot Rep. Daniel Webster of Florida.

The Freedom Caucus, credited with helping push out Speaker John Boehner, has 40 or so members and effectively has veto power in the election of a new speaker of the House.

Rep. Mick Mulvaney, R-S.C., told The Daily Signal in an interview that at least 80 percent of Freedom Caucus members agreed to vote for Webster on Thursday, when the House Republican Conference will pick its nominee for speaker in a secret ballot.

Mulvaney, a Freedom Caucus founder, says his group agreed to back Webster only during the Thursday vote, and they still could change their minds when the full House votes in public to elect the next speaker Oct. 29.

The winner then will require 218 votes, meaning he can’t afford 29 or more defections. The secret vote Thursday, however, requires a candidate to get only a majority of Republican votes—124—to become the nominee.

“I think this reflects the fact that guys and gals are most interested in process reform, regular order and rules changes,” Mulvaney said of Webster’s getting the nod. “Daniel’s track record of [supporting] open process and regular order is a real attraction to us right now.”

Politico reported Tuesday that McCarthy’s camp believes that it has the support of more than 200 members and is just a bit shy of the 218 he needs.

“I think Kevin McCarthy tomorrow will get strong majority support,” Dent told The Daily Signal, adding that not many Republicans outside the Freedom Caucus will vote for Webster.

“Will this cause chaos on the floor? It remains to be seen. But I know Kevin McCarthy enjoys the strong support of this conference,” Dent said.

McCarthy has faced criticism for comments he made on Fox News regarding the House Select Committee on Benghazi, and conservatives have said they worry about the blowback they would get back home for supporting him because he is a part of Boehner’s leadership team.

“We are getting inundated with calls to our offices and virtually 100 percent are opposing McCarthy,” Rep. John Fleming, R-La., told The Daily Signal, adding:

So we are getting a lot of input from our districts and it’s not pro-anybody but [is] anti-McCarthy. The main objection is that McCarthy is the right-hand man to the speaker, and is this a Boehner 2.0? We worked hard to change leadership and we are getting someone from the same culture. Is that substantial change?

Some had thought that Rep. Jason Chaffetz, R-Utah, a late entrant to the speaker race, could be a fallback option to McCarthy and win over both moderates and conservatives. “For a lot of folks, even those who were pro-McCarthy or pro-Chaffetz, Webster was their first choice,” Mulvaney said. “And Kevin did a very good job last night—he said a lot of the right things—but he couldn’t get 80 percent.”

Webster was elected to the House in 2009 after serving for nearly 30 years in the Florida legislature. While working in his family’s air-conditioning business, he was elected to the state House of Representatives in 1980. He moved steadily up the ranks in Republican leadership while serving in Tallahassee, climbing to minority whip and then majority leader.

After Republicans won control of the state House in 1996, Webster ran successfully for the speakership. He left in 1998 but was elected to the state Senate the same year. He served as majority leader from 2006 to 2008 before retiring because of term limits.

Throughout his tenure in the U.S. House, many lawmakers have viewed Webster as a relatively low-profile member.

But earlier this year, Webster surprised many in the Republican conference when he launched an 11th-hour bid for the speakership in an attempt to remove Boehner as House speaker.

Though Webster lost, he received the second-highest number of votes when 12 Republican colleagues voted in his favor.

Mulvaney insists that although McCarthy still could command the support of upward of 180 members Thursday and be in a “very strong position,” the Freedom Caucus didn’t oppose the front-runner simply for symbolic reasons. He told The Daily Signal:

I would hope—maybe I am being naive—that if the Freedom Caucus came out for Kevin McCarthy, that would carry some weight back home. We are interested in who has the best plan to empower members. I am not a fan of chaos for the sake of chaos. The goal here is not chaos. At the same time, I don’t think we have to be railroaded to vote for a person we don’t want to vote for.

As for concerns that this could throw the Republican conference into a tizzy, perhaps forcing multiple votes on the House floor if conservatives continue to support Webster later this month, Mulvaney said he isn’t worried.

“The process will work,” Mulvaney said. “It may take a while and be messy, but it will work. It will ultimately allow for a speaker who at least has 218 votes of members of Congress.”

Melissa Quinn contributed to this report.

This article has been re-edited and corrects an error so that Dent refers to Webster, not McCarthy as originally published.