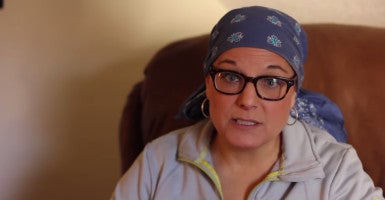 “You read about Oregon denying someone a lung transplant, but, ‘Here, you can you have these pills.’”

“That’s my fear about what this would become.”

That’s what Assemblywoman Lorena Gonzalez, a Democrat who represents the San Diego area, told the Sacramento Bee in an interview published in July.

Gonzalez is a Democrat who opposed California’s new physician-assisted suicide law, which was signed Monday by Gov. Jerry Brown, also a Democrat.

Gonzalez is right to be afraid.

In theory, the California law has safeguards ensuring that suicide is solely the patient’s choice. “Before the drugs can be prescribed, two California doctors must agree that the person has no more than six months to live,” reports the San Francisco Chronicle. “It is then the patient’s choice whether to take the drugs. Those who want to must affirm their intention 48 hours in advance and must take the drugs on their own, without help.”

But there are many ways to influence people, to get them to the point where they do state that their intentions are to die. And the example of Oregon, which enacted physician-assisted suicide in 1997, provides plenty of reason to be concerned that people, especially those who are low-income, are susceptible to ill-intentioned persuasion.

Dr. William Toffler, an Oregon doctor, wrote in The Wall Street Journal in August that “the regular notices I receive indicating that many important services and drugs for my patients—even some pain medications—will not be covered by the Oregon Health Plan, the state’s Medicaid program” were “concerning.”

Take the case of Barbara Wagner, whom Gonzalez was likely referring to in her remarks. Wagner was a lung cancer patient whose case attracted national attention in 2008, after her insurance company told her it wouldn’t cover a drug costing $4,000 a month her doctor had prescribed but would cover the drugs required for a physician-assisted suicide, according to ABC News. “It was horrible,” Wagner told ABC News at the time.

“I got a letter in the mail,” she recounted, “that basically said if you want to take the pills, we will help you get that from the doctor and we will stand there and watch you die. But we won’t give you the medication to live.”

“Last year, over half the patients who committed assisted suicide in Oregon relied on the government for their health coverage or had no coverage at all,” wrote Richard Doerflinger, associate director of the Secretariat of Pro-Life Activities at the U.S. Conference of Catholic Bishops, in Public Discourse earlier this year. “Over three-quarters of those dying under Washington’s assisted suicide law were partly or completely dependent on Medicare or Medicaid.”

As health care costs continue to soar, physician-assisted suicide could potentially draw more interest as a solution. Ryan T. Anderson, the William E. Simon fellow at The Heritage Foundation, warned in a March report about that possibility.

“Given the increasing number of elderly patients in modern societies, their increasing longevity, and the increasing cost of treating their chronic illnesses,” he wrote, “[physician-assisted suicide] will increasingly be seen as a cost-effective option and one that the elderly should be encouraged to consider.”

Other Voices Than Brittany Maynard’s

In his statement about signing the bill, Gov. Brown emphasized his personal experience.

“In the end, I was left to reflect on what I would want in the face of my own death,” he wrote. “I do not know what I would do if I were dying in prolonged and excruciating pain. I am certain, however, that it would be a comfort to be able to consider the options afforded by this bill. And I wouldn’t deny that right to others.”

But while Brown shares the view of the late Brittany Maynard, the 29-year-old who chose to end her life after being diagnosed with terminal brain cancer, and to speak publicly about that decision and advocate for physician-assisted suicide legalization, others—including those who have faced terminal illnesses—have thought differently.

“It takes a long time to come to terms with a disease, especially a terminal illness. And then you start thinking: OK, this is new me, this is the new normal, and I can still appreciate every moment.”

Those are the words of Maggie Karner, a 52-year-old woman who knew all too well what she was speaking about. Karner, who also had terminal brain cancer, was a vigorous advocate for life, fighting against legalizing physician-assisted suicide.

Karner passed away last month. Her daughter, Mary Karner, a nurse, wrote in The Federalist Tuesday:

I hope and pray that her legacy will continue to inspire caring American voters to support those choosing to squeeze life for every drop that it has to give. Support hospice and palliative care programs that give true meaning to ‘death with dignity.’ Let those fighting illness and disabilities know that they are precious, no matter what. They should never have to feel for a second that they might have a ‘duty to die’ just because the option is available.

Happily home with my littles!

(Kara Tippetts with her children)

Last year, when Maynard had announced her choice to end her life but had not yet died, mom of four Kara Tippetts penned an open letter to her, writing, “In your choosing your own death, you are robbing those that love you with the such tenderness, the opportunity of meeting you in your last moments and extending you love in your last breaths.”

Like Karner, Tippetts knew firsthand what Maynard was experiencing. She died this March, after battling breast cancer for nearly three years.

If you are grieved by tragic stories like Maynard’s, there are ways to help, such as fighting for better, more comfortable care for the dying. But true compassion doesn’t end life earlier. True compassion doesn’t create a system where people, especially those without significant financial resources, are vulnerable to pressure to end their lives sooner.

“Please remember patients like me who don’t want to commit suicide but instead want our right to live out our days without the risk of abuse or the subtle pressure to comply with state-sanctioned suicide,” Karner said.

Patients like Karner deserved to be remembered. It’s unfortunate that California disregarded her advice, and took a step toward becoming a culture where only some lives are cherished.