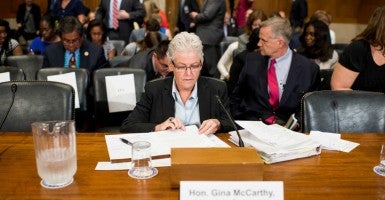 EPA’s New Ozone Rule Will be a deadly, regressive tax on Poor and Millennials

Here are 4 reasons why Congress needs to take the ozone issue back into its own hands.

1. Science alone is not the answer. Both sides claim that science is on their side. Some complain that the EPA’s standard isn’t strong enough to protect human health. Others point out an increasingly substantiated concern that EPA’s science and scientific reviews are no longer truly independent, leading to policies that have doubtful health benefits in reality. Heritage’s American Conservation Ethic and a recent paper by George Washington University’s Susan Dudley explain the danger of the “scientization” of policy—in other words, “camouflag[ing] controversial policy decisions as science.”

Human welfare and the ozone rule are not simply a matter of what the science “tells” us—if the science on ozone were perfectly objective, there would be no dispute. Scientific knowledge, models, and statistics are but a few tools—albeit important ones—that help inform the policy debate around a complex issue that cannot be understood in isolation. Congress and the states are the best places to take into consideration not only science, but also costs, risks, legal implications, consensus, federalism, judgment, other health issues at play, and so on. Science cannot tell us, for instance, how much risk or cost we are willing to accept.

2. Setting standards is inherently a policy issue requiring the consideration of costs and benefits. States have invested billions into developing and carrying out implementation plans to meet ever lower standards chasing marginal benefits. Cost and the question of how much is too much rightly belong with elected representatives of the American people, not an unelected panel of bureaucrats and scientists from the EPA.

But the Clean Air Act forbids the EPA from considering the costs of implementing the ozone standard when deciding whether a new standard is warranted. As one former EPA science adviser has commented, “does any thinking person actually believe that they shouldn’t, or don’t [take cost into account in promulgating standards]?” Pretending that costs and policy judgments aren’t being made by the EPA is a disservice to Americans.

Why else would EPA choose a 70-ppb standard when allegedly there are health benefits to the 65-ppb standard EPA also considered? President Obama himself explicitly stated that cost was the reason he requested that the EPA withhold its proposed standard in 2011, stating the need for “reducing regulatory burdens and regulatory uncertainty, particularly as our economy continues to recover.” If the human well-being as it relates to the economy mattered then, shouldn’t it matter now?

3. A tighter ozone standard sets up perverse competition among states. Curiously, some of the loudest advocates for lower ozone standards are the worst offenders. George Washington University’s Susan Dudley has called them out on their disingenuous concern: “From the perspective of nonattainment areas, strict standards that throw areas in other states out of attainment ‘level the playing field.’ Areas that are already out of attainment have little to lose from stricter standards, but they gain relative to competing states which will have nonattainment conditions imposed on them.”

Exceeding the ozone standard saddles a state with weighty economic requirements and timelines to meet the standard. For example, in order to meet the 1997 ozone standard, Texas created the Texas Emissions Reduction Program, costing Texans $1 billion in the form of a new car title fee to pay for retrofitted and replacement engines, trucks, and construction equipment. Rather than rewarding improvement, many areas could be in violation of the standard not because of more pollution, but because of shrinking standards.

4. Good environmental policy is about choices. Speaking about the then-proposed ozone standard, President Obama said in September that “[n]umber one, we’re under a court order to do this. So I think there may be a misperception that the EPA can do whatever it wants here.” But this is misleading. The Clean Air Act does in fact require the EPA to evaluate the ozone standard every 5 years, a timeline which itself is overly ambitious and to which the EPA has only rarely kept. However, neither the law nor the courts enforcing it required EPA to change the standard.

At the same time Obama argued that EPA had no choice but to regulate, he continued that EPA was considering stakeholder concerns regarding “legitimate economic costs,” a choice that the Clean Air Act expressly forbids it to consider. The ozone standard has become only more controversial as it becomes more expensive to meet with smaller margins of tangible benefits (as opposed to modeled hypothetical ones). EPA is now setting American economic policy as it sets environmental policy. At the very least, EPA should be required to take economic impacts into consideration.

The ozone standard is a major policy decision that impacts millions of Americans and has steep economic costs. The EPA looks at only one small slice of the issue in isolation from many others. To relegate such a far-reaching decision to an unelected agency is dangerous. Congress must step in to look at the full picture.