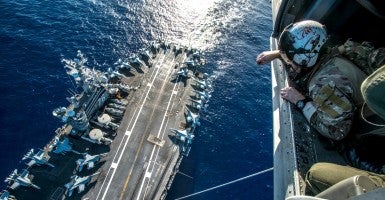 The Russians are bombing CIA-backed rebels in Syria and continuing to hold parts of Ukraine. ISIS continues to spread in the Middle East and inspire attacks around the world. Iran is receiving hundreds of billions in sanctions relief, some of which will likely go to destabilizing the Middle East. China is building illegal islands in the South China Sea. Hundreds of thousands of refugees are streaming across Europe. The Taliban is on the rise in Afghanistan. And our national secrets are being vacuumed up by Chinese hackers.

At the same time, our national defense budget is being slashed.

Since 2011, the defense budget has been cut by 15 percent in real terms. If you include the war budget, which has been going down as we reduce troops in Afghanistan, the national defense has been cut 25 percent in four years.

As a result of these budget cuts, the U.S. military is smaller than it was on 9/11 and in many cases the smallest it has been in recent history.

The world is a mess, our military is being slashed, and now President Obama is going to veto a bipartisan bill that would increase the national defense budget by 6 percent in real terms.

The House of Representatives just passed the National Defense Authorization Act for Fiscal Year 2016 (NDAA), and it is headed to the Senate. This is a bipartisan bill that has been signed into law every year for 53 straight years, but Obama plans to veto it for one simple reason: it doesn’t increase non-defense spending. The president believes that defense and non-defense spending should be increased, and, according to the White House, “he will not fix defense without fixing non-defense spending.”

To be clear, Republicans in Congress and Obama both agree that the defense budget should be increased, but Obama is going to veto a bill to do just that because he wants non-defense spending to be increased as well.

This is not how the defense budget should be funded, but the White House’s complaints ring hollow. This administration has never shown an interest in responsible budgeting or reining in the deficit except as a political tool for cutting our military.

The White House wants Americans to believe that as the world burns, the defense budget should not be increased unless all of these overgrown bureaucracies get their pound of flesh (or billion-dollar budget increases, as the case may be).

The simple truth is that our national security budget matters more. The United States faces growing threats to our homeland as well as to our allies and interests abroad. The defense budget should never be used as political leverage for increasing domestic spending, but this is particularly disturbing at a time of growing security threats. Americans deserve a strong national security budget without having to pay billions extra to support Obama’s liberal agenda.

Vetoing the NDAA for domestic budgetary reasons is wrong.