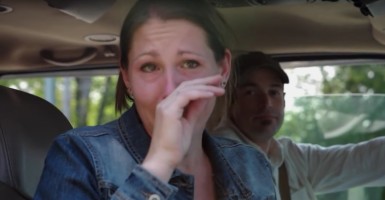 Aaron and Melissa Klein were ordered to pay $135,000 for refusing to bake a cake for a same-sex wedding. (Photo: Patchbay Media/The Daily Signal)

The agency that ordered Aaron and Melissa Klein to pay $135,000 in damages for refusing to bake a cake for a same-sex couple began the legal process last week to seize the money the Oregon bakers are refusing to pay.

“Our agency has docketed the judgment and is exploring collection options,” Charlie Burr, communications director for the Oregon Bureau of Labor and Industries, told The Daily Signal. “They are entitled to a full and fair review of the case, but do not have the right to disregard a legally binding order.”

Docketing the judgment is a preliminary step the agency must take in order to seize the Kleins’ house, property, or other assets in lieu of payment.

On July 2, Brad Avakian, commissioner of the Oregon Bureau of Labor and Industries, ordered the Kleins to pay $135,000 for the emotional, physical, and psychological damages they caused Rachel and Laurel Bowman-Cryer for refusing to make a wedding cake.

Since then, the Kleins have been vocal about their plans to resist the order, and they told The Daily Signal they have no intention of backing down.

“There’s legal reasons and there’s also kind of personal reasons,” Aaron Klein told The Daily Signal in a phone interview. “If a civil court or a circuit court judge had made this order, I would consider it legally binding. But when a bureaucracy does it and I didn’t get due process, I don’t call it legally binding.”

Talking about the personal reasons, Aaron cited a July interview in Willamette Week, where the complainants suggested that the case wasn’t about money.

Her wife, Laurel, added, “[W]e’re not asking for anything. We’ve never asked for a penny from anybody.”

“When you have these girls come out and say we never wanted the money,” Aaron said, “it wasn’t about the money and we don’t need the money … and I say this isn’t right, I shouldn’t have to pay this money, and the only person saying the money should exchange hands seems to be Brad Avakian.”

In order to pay the $135,000, the Kleins were given two options: obtain a bond or an irrevocable line of credit, which would guarantee their obligations to the Bowman-Cryers unless the Kleins won their case.

Taking out a line of credit, he said, would be the same as handing over money to the state.

“I couldn’t find a bank that would do it without just depositing the full amount of money, so it’s not a letter of credit at that point. It’s just the same as giving the state money, and having them hold it, which I don’t trust the state to hold my money any more than I trust them to give me the evidence.”

Instead, the Kleins’ attorneys asked the Oregon Bureau of Labor and Industries to issue a stay, which is a legal process that would have put the damages payment on hold until their appeals ruling comes out.

(The Kleins filed a petition for review with the Oregon Court of Appeals in July, after the final order came out.)

The Oregon Bureau of Labor and Industries denied their request for a stay.

“It’s difficult to understand the Kleins’ unwillingness to pay the debt when they have, very publicly, raised nearly a half million dollars,” Burr, communications director for the Oregon Bureau of Labor and Industries, said. “They are entitled to a full and fair review of the case, but do not have the right to disregard a legally binding order.”

After the order came out, multiple fundraisers were set up to help the Kleins pay the damages.

Although those fundraisers raised thousands of dollars, Aaron claimed the “half million” figure is “bloated” but did not disclose the final tally.

If the Kleins eventually win their case in the appellate court, Aaron said they’d like to use that money to first pay their own bills, then “bless” others.

“I’d like to say that we’d definitely help some people out. We’ve had a huge financial hardship through this, so it would be nice to catch up on some bills, but we’d definitely love to bless others.”