GE’s Cynical Ruse: Pretending Jobs Are Moving Because of End of Ex-Im Subsidies 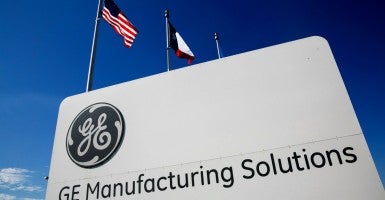 The evidence just does not support GE’s claim that it is moving American jobs because of Ex-Im. (Photo: Kris Tripplaar/Sipa USA/Newscom)

In their latest claim, company officials say they will shutter GE’s Waukesha, Wis., engine plant and build a new facility in Canada instead to access export subsidies there. And it just so happens that the much larger new Canadian plant will create exactly 350 jobs (initially), according to GE—the very same number that the Waukesha facility will lose. What a coincidence.

Wisconsin Rep. Scott Allen, whose district includes Waukesha, was shocked by news of the plant closure. But what angered him even more was his conversation with GE corporate spokesperson, Patrick Theisen. According to a press release from Allen’s office, “Theisen was eager to connect me with his public relations department to help me gin up a press release blaming Congress and demanding they act. In the same conversation, practically in the same breath, he told me that the decision on the Waukesha plant was made some time ago and that it was irreversible.”

There is indeed a lot more to the Waukesha plant closure, of course. GE acquired the Waukesha factory in 2011 as part of its $3-billion purchase of Dresser Inc., a leader in infrastructure products and services for the energy industry, with customers in some 160 countries. In announcing the deal, GE officials stressed that Dresser generated some 60 percent of its revenues overseas, and the acquisition would significantly expand the company’s global energy portfolio.

A larger global footprint has long been a major corporate goal, according to a variety of GE documents. Between 2004 and 2014, for example, the number GE employees in the United States fell from 165,000 to 136,000 (a 17.6-percent reduction). During the same period, the number of GE employees abroad grew from 142,000 to 169,000 (a 19-percent increase). Ex-Im was fully operational during that interval, and GE was one of the top five beneficiaries.

Addressing investors in 2012, John Rice, the vice chairman, president, and CEO of GE Global Growth & Operations, said, “We’ve got a pretty targeted and focused strategy … [W]e’re trying to optimize global capabilities and build on these broad, strong global strengths.” It is entirely logical, then, that GE was far more interested in building on Dresser’s global reach than maintaining its Waukesha plant.

Indeed, the new Canadian facility will be nothing like the Waukesha operation, according to GE officials. Instead, plans call for construction of a “brilliant factory”—a new breed of manufacturing plant where design, engineering, production, supply chain, and distribution are interconnected through a single “digital thread.” GE has applied the concept to factories in South Carolina, India, and Poland.

GE doesn’t need to move to Canada to tap export subsidies there. The company already has a well-established relationship with Export Development Canada (EDC), the counterpart to the U.S. Export-Import Bank. Earlier this month, in fact, the EDC approved $25 million in financing for GE exports to Oman.

The company has also benefited from a variety of other EDC subsidies for exports to Mexico, India, and Turkey, as well as support for the sale of GE turbines to China for that country’s Three Gorges Project—the largest hydropower operation in the world.

Even without the subsidies, GE does not lack access to private export financing—which is what 98 percent of U.S. exports rely upon. With a market cap of $245 billion and annual revenues of $149 billion, GE is a pretty safe bet for private investors. Moreover, GE’s Capital Corporation, which finances global sales, holds assets of $499 billion and posted net income of $7 billion last year.

Tying the Waukesha plant closure to the expiration of Ex-Im subsidies fits neatly within the narrative that GE and other Ex-Im proponents have pushed for nearly two years—and which has been readily accepted by media outlets nationwide. No sooner had Congress returned from its summer recess than GE, Boeing, and other Ex-Im beneficiaries issued a series of press releases prompting thousands of articles blaming the expiration of the Ex-Im charter for the loss of thousands of U.S. jobs to countries such as France, China, and the United Kingdom.

But GE already benefits from lucrative export subsidies in each of those countries, as well as in others. In France, for example, GE ranks among the top 15 beneficiaries of export subsidies, having collected €478 million between 2001 and 2008. GE’s recent acquisition, Alstom, France’s leading power company, received a whopping €1.9 billion in the same period. That means GE is now in line for much greater export subsidies.

Nor is GE creating jobs in China to tap corporate welfare; expanding operations there has long been a primary corporate goal. As it is, GE generated about $6 billion in revenue in China last year. Mark Hutchinson, president and CEO of GE China, told investors that the company expects to add $90 billion in business there over the next five years.

“The beautiful thing about China is that it has a five-year plan,” he said. “And as we look at the five-year plan they announced last year, it really fits very well into what we do.”

GE is likewise a leading investor in the United Kingdom, where it operates more than 40 manufacturing facilities and benefits from the country’s export subsidies. Since 2003 alone, the company has invested £14 billion in the U.K.

Lawmakers and the public must understand that multinational corporations do not make costly moves in a hasty manner or on the basis of a single factor. The evidence just does not support GE’s claim that it is moving American jobs because of Ex-Im.

They must also understand that the end of Ex-Im is not hurting the U.S. economy. Private financing is readily available, as reflected in the record levels of U.S. exports in recent years. And, of particular importance, export subsidies carry considerable costs to American businesses that are left to compete against foreign firms subsidized by the U.S. government.

It is understandable, of course, that Ex-Im’s biggest beneficiaries want to keep their subsidies. But the rest of America is far better off when there is opportunity for all and favoritism for none.