Find Out How Your Lawmakers Voted on Government Spending Bill That Averts Shutdown, Funds Planned Parenthood 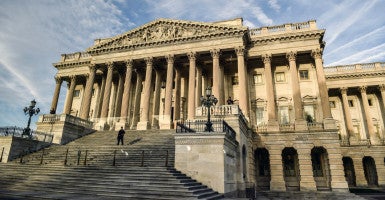 On the last day of the fiscal year, Congress approved a short-term spending measure that keeps the federal government operating through Dec. 11. The bill faced strong dissension in the House, where 151 Republicans voted against it because the bill does not cut off federal funding for Planned Parenthood.

The vote was notable in the House in that it provided a chance for candidates for upcoming leadership races to weigh in on a controversial issue in the caucus.

Majority Leader Kevin McCarthy, R-Calif., who is the leading candidate to replace Speaker John Boehner, voted for the measure.

His only opponent for speaker, Rep. Daniel Webster, R-Fla., voted against the bill, as did Rep. Tom Price, R-Ga., who is one of two lawmakers running for majority leader.

Some House members believed that the vote on the continuing resolution, as the funding measure is known, would be telling in how potential new leadership may handle future issues.

Conservatives argued that leadership candidates would be judged on if they stood up to Planned Parenthood in the face of a potential shutdown.

“It’s unfortunate that this thing passed,” said Rep. Jim Jordan, the chairman of the House Freedom Caucus, in an interview with The Daily Signal. “But I think the most unfortunate thing is we should have back on July 14, when the first [Planned Parenthood] video came out, went full commitment to making this a national debate and really elevating it and going all in. We could have been in a position to win, but we didn’t, and this is the part that frustrates me.”

“Our new leadership has to commit, whoever that happens to be, to the same effort on things that we’ve told the voters we were gonna do—like we all told them we were pro-life, right?—we have to have the same intensity in getting those things done that we did on, for example, trade promotion. We have to demonstrate we are actually fighting on the things we said and have that full debate. And that’s what we are not doing.”

Taking a different view, Rep. Charlie Dent, a moderate Republican from Pennsylvania, told the The Daily Signal that conservatives were wrong to try to hold up the spending measure to cut off funding for Planned Parenthood.

“Leadership will look feckless and ineffective if they try to appease the rejectionist members of this conference,” Dent said.

“Going forward,” Dent remarked, “leadership will have to find a way to move forward on five or six measures that must be resolved, including a budget agreement, tax extenders, the debt ceiling, and a long-term transportation measure. All will require a level of compromise required to move beyond the warfare and get to a better place.”

The continuing resolution funds the government at a rate of $1.017 trillion annually for the next two and a half months. Senate leaders argued the deal gives Congress time to negotiate a budget deal with the president, though Obama has been pushing Congress to break the spending caps imposed by the 2011 Budget Control Act.

That bill, however, was blocked in the upper chamber, after it failed to reach the 60 votes needed to advance.