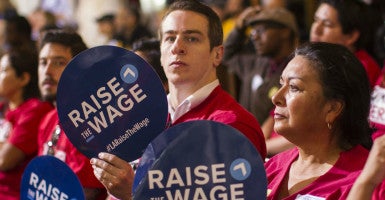 The Los Angeles County Federation of Labor, which led the charge for a $15 minimum wage hike in California, is trying to get an exemption for employers under union contracts. (Photo: Ringo Chiu/ZUMA Press/Newscom)

The labor union that led the charge for a $15 minimum wage hike in cities across California is now moving to secure an exemption for employers under union contracts.

The Los Angeles County Federation of Labor buried the exemption on the eighth page of its 12-page proposal for the Santa Monica City Council to review Tuesday while deciding whether to follow Los Angeles and increase the minimum wage.

The loophole would allow employers with collective bargaining agreements to sidestep the wage hike and pay their union members below the proposed $15-per-hour minimum wage.

James Sherk, a research fellow in labor economics at The Heritage Foundation, said the exemption is a union attempt to encourage businesses to unionize by making themselves the only low-wage option as union membership continues to drop off.

“This proposal would force any worker in Santa Monica whose labor is worth less than $15 an hour to purchase union representation in order to hold a job,” Sherk said. “Unions should not be able to selectively exempt themselves from the harmful consequences of the minimum wage hikes they lobby for.”

The move in Santa Monica is not the federation of labor’s first attempt to compound a collective bargaining exemption into a minimum wage increase.

The federation received an outpouring of criticism when it attempted to push the same carve-out for unionized employers after Los Angeles decided to increase its minimum wage from $9 to $15.

“This is hypocrisy at its worst,” the Los Angeles Times wrote in a blistering editorial. “It plays into the cynical view that the federation is more interested in unionizing companies and boosting its rolls of dues-paying members than in helping poor workers.”

Rusty Hicks, the head of the federation, released a statement in May saying that businesses and employees under collective bargaining agreements should have the ability to negotiate a wage below the law’s mandated minimum in exchange for other benefits.

“This provision gives the parties the option, the freedom, to negotiate that agreement. And that is a good thing,” Hicks said.

Hicks told the Los Angeles City Council to thwart the measure’s passage unless the exemption was included, but he ultimately lost the battle after receiving significant backlash for the request.