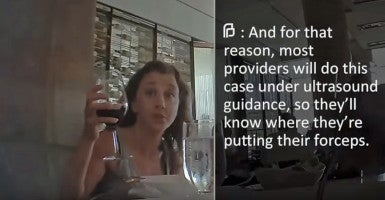 A forensic analysis of undercover videos about Planned Parenthood’s abortion practices are “authentic and show no evidence of manipulation or editing,” according to a report released Tuesday by Alliance Defending Freedom.

The analysis was completed by Coalfire, a digital security and forensics firm that has worked on civil and criminal investigations. The firm had access to all audio and video investigative footage recorded by the Center for Medical Progress.

“The Coalfire forensic analysis removes any doubt that the full length undercover videos released by Center for Medical Progress are authentic and have not been manipulated,” said Casey Mattox, senior counsel at Alliance Defending Freedom. “Analysts scrutinized every second of video recorded during the investigation and released by CMP to date and found only bathroom breaks and other non-pertinent footage had been removed.”

According to the report, the videos only omit footage irrelevant to the allegations such as bathroom breaks.

“Planned Parenthood can no longer hide behind a smokescreen of false accusations,” Mattox said, “and should now answer for what appear to be the very real crimes revealed by the CMP investigation.”

“Planned Parenthood is an organization that cares about one thing: making a profit at the expense of women’s health,” she added. “The investigative videos, whose authenticity was confirmed by the report, show that Planned Parenthood is an abortion-machine whose top executives and doctors haggle and joke about the harvesting and selling of baby body parts. Women deserve far better.”

Spokespersons for Planned Parenthood have denied illegal conduct. Last month, the organization commissioned their own analysis of the videos which claimed that the “edited” videos “have no evidentiary value in a legal context and cannot be relied upon for any official inquiries.”

The Daily Signal previously reported that the firm hired by Planned Parenthood, Fusion GPS, has ties to the Democratic Party, including an effort to expose a group of eight private citizens who donated to a super PAC supporting former Massachusetts Gov. Mitt Romney’s 2012 presidential campaign.

>>> Read the full report from Coalfire: