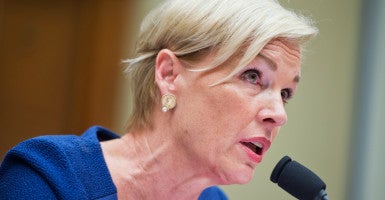 Cecile Richards, the president of Planned Parenthood, testified during a House Oversight Committee hearing on Tuesday that she was unaware that unborn children can sometimes survive abortion attempts, despite testimony from two abortion survivors before Congress earlier this month.

During the hearing, Rep. Ron DeSantis, R-Fla., asked Richards, “If a child survives an abortion attempt, should it be given nourishment and medical care?”

“I’ve never heard of such a circumstance happening,” Richards replied.

“But you would say that medical care would be in order at that point? Forget about Planned Parenthood. Just generally?” DeSantis asked.

“Well I’d say, again, I want to be responsible for Planned Parenthood and what we do there, and certainly in that situation in—which, again, has never occurred that I know of, a baby born … that baby should, as the mother, should get appropriate medical care from the physician. And would,” Richards said.

During a Sept. 9 House Judiciary Committee hearing on Planned Parenthood, Gianna Jessen testified that she survived an attempted abortion seven months into her biological mother’s pregnancy.

“Do not tell me these are not children. A heartbeat proves that. So do I,” Jessen said, according to TheBlaze.

Melissa Ohden, another survivor of an abortion attempt, also testified at the hearing.

“A bucket of formaldehyde in a utility closet was meant to be my fate after I survived my abortion attempt,” Ohden said, according to TheBlaze. “I deserved the same equal protection under the law as all of you.”