John Boehner Will Resign From Congress 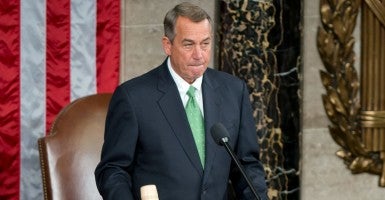 House Speaker John Boehner will step down Oct. 30, both from that job and from Congress. (Photo: Ron Sachs/Newscom)

>>> Updated to include a wave of response.

House Speaker John Boehner announced to Republican lawmakers this morning that he will resign as speaker and from Congress at the end of October.

The news surprised Washington even though the Ohio Republican has faced renewed pressure from conservatives who want to use a must-pass spending bill to strip Planned Parenthood of its federal funding.

At a press conference just after 1 p.m., Boehner told reporters he decided to resign only this morning, after contemplating Pope Francis’s message to Congress.

“It was an honor to serve this institution,” Boehner, the self-described “son of a bar owner from Cincinnati,”  said.

In a three-paragraph statement issued earlier by aides, Boehner said:

The first job of any speaker is to protect this institution that we all love. It was my plan to only serve as speaker until the end of last year, but I stayed on to provide continuity to the Republican conference and the House. It is my view, however, that prolonged leadership turmoil would do irreparable damage to the institution. To that end, I will resign the speakership and my seat in Congress on Oct. 30.

My heart is full with gratitude for my family, colleagues & the people of Ohio’s 8th District http://t.co/uylVed86h2 pic.twitter.com/mc5acb9dGs

Reaction among Boehner’s colleagues was swift.

I think he did the right thing. Any time any person becomes bigger than the issues at hand, then that person has to have an element of self sacrifice for the greater good. That’s what he did today.

Opposition among conservatives to Boehner’s leadership reached a fever pitch this summer, when Rep. Mark Meadows of North Carolina, a co-founder of the conservative House Freedom Caucus, presented a motion to vacate the chair.

It was an extraordinary measure expressing no confidence in a speaker of the House that hadn’t been used in a century.

Although lawmakers did not vote on the measure at that time, Meadows and other conservatives have said any member could bring up the motion for a vote depending on how Boehner handled upcoming fights in Congress, including the one over Planned Parenthood.

Rep. Sean Duffy, R-Wis., praised the speaker for sacrificing himself instead of fellow Republicans.

“I think the speaker has accomplished what he came here to do,” Duffy told The Daily Signal. “I think he sees that this will be a hard vote for his members should the motion to vacate be called, and instead of sacrificing his members, he was willing to step down.”

Duffy noted that George Washington also “gave up power,” as have other American leaders through history, adding:

Boehner’s the same way. Boehner could’ve stayed in as a speaker, and he was willing to give it up, which is a remarkable American tradition that John continues with his announcement today.

Speaker Boehner has served honorably during a difficult time for Republicans when the threat of a veto from the White House constantly impedes our legislative agenda. At times I differed with Speaker Boehner on policy or procedural positions, but I commend him for his honorable service, his humility, his undeniable love for his country and his desire to serve this great nation.

Speculation immediately turned to whether conservatives would accept Boehner’s top deputy, Majority Leader Kevin McCarthy of California, as speaker. Some conservatives have faulted McCarthy for going “establishment” on them.

“Americans deserve a Congress that fights for opportunity for all and favoritism to none,” Michael A. Needham, chief executive officer of Heritage Action for America, the lobbying affiliate of The Heritage Foundation, said in a prepared statement. “Too often, Speaker Boehner has stood in the way.”

Needham, whose organization repeatedly has clashed with the Ohio Republican and his leadership team, added:

Today’s announcement is a sign that the voice of the American people is breaking through in Washington. Now is the time for a principled, conservative leader to emerge. Heritage Action will continue fighting for conservative policy solutions and we look forward to working with the new leadership team.

President Obama, in remarks at the White House just before 1 p.m., used the word “gracious” to describe Boehner—with whom he often has tangled over the years. Referring to him as “John,” Obama called the speaker “a good man” and “patriot” who “cares deeply” about the House, his constituents and the nation.

“He always conducted himself with courtesy and civility to me,” Obama said of Boehner, adding that “he kept his word when he made a commitment.”

.@POTUS on the resignation of Speaker of the House John Boehner. http://t.co/BgA9I4e8tJ

Minority Leader Nancy Pelosi, D-Calif., who held the speakership before Boehner, called the resignation “seismic” and a “stark indication of the disarray of House Republicans.”

Majority Whip Steve Scalise, R-La., a conservative elected last year as second-in-command to Boehner, said he was grateful to the speaker as a leader, friend and mentor. In a formal statement, Scalise said:

There is no speaker in history who has done more to defend innocent human life, to combat a lawless executive branch, and to advance a conservative governing vision for our country. His humility, patriotism, and commitment to our values will be deeply missed.

Scalise and McCarthy both rose in the leadership ranks after Majority Leader Eric Cantor of Virginia lost his House seat last year to newcomer Dave Brat in a surprise primary upset.

Brat, in an email to The Daily Signal, said he admired Boehner’s “difficult and selfless” decision. The Virginia Republican said:

He undoubtedly served with love for all people and our country. His job was not always easy, facing pressures from a highly political and unlawful White House as well as diverse opinions within the Republican House conference. While I have not always agreed with leadership, I respect Speaker Boehner for his time served and wish him and his family the best during this time.

Ways and Means Chairman Paul Ryan, R-Wis., the party’s nominee for vice president in 2012 and also seen as a contender for the speakership, called Boehner’s move “an act of pure selflessness. ”

John’s decades of service have helped move our country forward, and I deeply value his friendship. We will miss John, and I am confident our conference will elect leaders who are capable of meeting the challenges our nation faces.

The news comes the day after an emotional Boehner, a Catholic, welcomed Pope Francis to his Capitol office just before the pontiff’s address to a joint meeting of Congress.

Hope everyone from #OH08 visiting for #PopeInDC had a remarkable experience. What a day. http://t.co/IAxKrXjkkb

Senate Majority Leader Mitch McConnell, a friend of Boehner’s who has been the target of similar criticism from conservatives, said he knew the pope’s address was “an incredibly important event” for the speaker.

In a prepared statement, McConnell said of Boehner:

It was his aim to bring the same spirit of grace that has always guided his life, to others. You only had to look out onto the Capitol lawn to see what he achieved. And that he chose this moment to make this decision, means he will be leaving us in a similar spirit.

Boehner met later Thursday with Meadows, Rep. Jim Jordan of Ohio, Rep. Raúl Labrador of Idaho and other leaders of the Freedom Caucus.

Politico reported that sources close to Boehner rejected the idea that the speaker himself would the offer the motion to vacate his chair — to show he has the strength to command enough votes to survive.

Freedom Caucus members applauded Boehner for deciding to go out on his terms.

“It was the classiest and boldest act of leadership I’ve ever seen,” Rep. Barry Loudermilk, R-Ga., a member of the Freedom Caucus, said of Boehner’s decision in an interview with The Daily Signal. Loudermilk said:

For him to step aside, knowing it was the right thing to do, instead of putting members of this conference through what was going to be a very arduous situation of having to go through another vote. It was a no-win situation.

“I think it’s a statesman-like thing he did, knowing that there was a groundswell of opposition to him, particularly in his position,” Rep. John Fleming, R-La., also a Freedom Caucus member, told The Daily Signal. “Doing what he did saved a lot of battles and consternation and ugly fights that could’ve broken out.”

Others members saw Boehner’s decision as a clear victory for conservatives.

Huelskamp, who frequently has defied House leadership, in 2012 was removed from the Agriculture Committee for doing so. The Kansas Republican pointed to Boehner’s punishment of conservatives as the “price” the speaker now pays.

“To think that John Boehner kicked four of us off of the committee … almost three years ago come Nov. 1, and John Boehner will be gone on Nov. 1 and I’ll still be there,” Huelskamp told The Daily Signal. “But, he’s punished conservatives, gone after conservatives, and I think this is the price.”

Boehner was elected to Congress in 1990. He was selected by the Republican conference to serve as House speaker in 2010, after Republicans won the majority in the “tea party” surge.

Before assuming the role as the House’s top Republican, Boehner, 65, was majority leader and chairman of the Committee on Education and the Workforce.

David McIntosh, president of the conservative group Club for Growth, who served with Boehner as a GOP congressman from Indiana from 1995 to 2001, said Boehner and other Republicans “strayed” in the years since.

“His work on the Contract with America helped Republicans win a House majority when I came to Congress [in 1994], and his support of a ban on earmarks was an important reform,” McIntosh said, adding:

House Republicans have, unfortunately, strayed from limited government principles, and this transition offers an opportunity for change. The next speaker must be committed to strong economic conservativism that includes holding the line on sequestration spending caps and promoting pro-growth tax reform.

“I am hopeful that during this season of change, House Republicans will focus on a plan to get us out of our dysfunctional state and not just settle for a change in ranks,” said Rep. Peter Roskam, R-Ill., who is expected to pursue a leadership position.