John Boehner Is Resigning As Speaker of the House. What Happens Next? 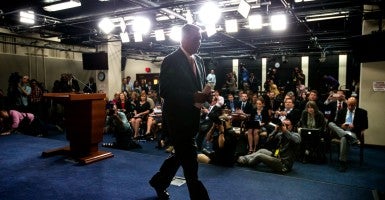 House Speaker John Boehner’s resignation comes at a consequential time for Republicans dealing with immediate pressure points like a funding fight over Planned Parenthood, and a larger reckoning of their identity moving forward.

In a news conference at the Capitol Friday, Boehner, R-Ohio, promised that he would maintain the same approach during his last weeks—16 legislative days to be exact—before he officially departs on Oct. 30.

“I am not going to sit around and do nothing the next 30 days,” Boehner said. “There is a lot to be done. I will plan to do as much as I can. I will make the same decisions I would have made regardless of this.”

>>>John Boehner Will Resign From Congress

That means Boehner and his House leadership team will likely proceed with a strategy to avoid a government shutdown next week.

According to news reports, leadership plans to introduce a “clean” continuing resolution next week that would leave Planned Parenthood’s funding intact.

The House would also vote on a standalone bill to strip Planned Parenthood of its federal dollars, but this would likely fail in the Senate.

Republicans would then begin drafting language to defund the organization through reconciliation, a budget tool that allows legislation to pass with a simple majority‚ 51 votes, in the Senate.

Conservatives promise to continue to pressure Boehner on this issue during his last days.

“Boehner has one thing to lose, and that’s his pro-life principles,” said Rep. Tim Huelskamp, R-Kan., a member of the conservative House Freedom Caucus who warned he would not support a government funding bill that includes money for Planned Parenthood.

“It’s the only thing he says he’s never given up on, and I think we’re on the edge of having him give up on that,” Huelskamp told The Daily Signal, adding that Boehner’s current strategy would be an “epic failure.”

While Congress faces a deadline of Oct. 1 to prevent a shutdown, lawmakers are also trying to reach a deal on a longer spending measure that would likely run through the end of the fiscal year in September 2016.

Republican leadership has been frustrated with Democrats who have blocked the GOP from implementing funding legislation that keeps with the domestic spending limits imposed by the Budget Control Act of 2011.

Before Boehner’s resignation, the expectation among many lawmakers was that GOP leaders—anticipating the government’s borrowing power expiring as early as November and another shutdown looming in early December—would pursue a so-called “grand bargain” spending deal with Democrats and President Barack Obama.

Indeed, according to a conservative lawmaker who met with Boehner the day before he resigned, the House speaker said a budget that spent above the spending caps seemed inevitable.

“He volunteered that we will probably have to break the spending caps after the CR [continuing resolution] expires (likely in early December),” recalled Rep. Matt Salmon, R-Ariz., of the House Freedom Caucus.

In an interview with The Daily Signal after Boehner resigned Friday, Salmon hinted that he hoped a new speaker would stand firm on spending and refuse to do a deal that went against a Republican budget plan agreed to earlier this year.

“I look forward to getting a leader that will stand up to this president and start helping us fulfill the promises we’ve made that haven’t been kept yet, which is most of them.”

Though Boehner won’t be around to see through a long-term spending plan, his successor will face pressure to show leadership quickly.

“The next speaker is going to have a very tough job,” Rep. Charlie Dent, a moderate Republican from Pennsylvania, told The New York Times. “The fundamental dynamics don’t change.”

“There are anywhere from two to four dozen members who don’t have an affirmative sense of governance. They can’t get to yes. We still have important issues to deal with, and this will not be easier for the next guy.”

Dent continued: “Now, if we have a new speaker, is there going to be an epiphany? They won’t be happy if it’s Paul Ryan or Kevin McCarthy, who will have to make accommodations with a Democratic president and the Senate constituted the way it is.” Conservatives, meanwhile, say a leadership change will embolden them to demand a seat at the negotiating table.

“As far as the change of leadership, we need somebody who is transactional,” said Rep. Barry Loudermilk, a House Freedom Caucus member from Georgia, in an interview with The Daily Signal.

“We want somebody who will bring conservatives to the table. All we are asking for is an equal voice that the moderates and liberals have. We know not everything going forward will go exactly the way we want, but we at least want the spirit of compromise extended to us that is always extended to the other side.”

Several conservative lawmakers told The Daily Signal they had not yet determined who should replace Boehner, but they had some criteria in mind.

Fleming went on to note that he felt the Freedom Caucus will grow in its influence of the House GOP.

“There’s no question that we were the tool of pressure,” he said. “That just goes to show you that our influence has grown in the House, and I don’t want to count a change of leadership, per se, as a victory for the Freedom Caucus, but just to show that we definitely have influence.”

Though much is in flux, there has already been some angling for power.

In the wake of Boehner’s resignation, Republicans have begun scrambling for the four leadership spots—speaker, majority leader, majority whip and conference chair.

Majority Leader McCarthy, R-Calif., is expected to make a run for speaker, with Majority Whip Steve Scalise of Louisiana, Conference Chair Cathy McMorris Rodgers of Washington and Rep. Tom Price of Georgia likely to run for majority leader, according to Politico.

Financial Services Committee Chairman Jeb Hensarling of Texas is mulling a run for the speakership, his office told The Dallas Morning News.

The Republican conference will gather in the coming weeks—a date has not yet been set—to vote privately for a new speaker and any open leadership positions. Then, lawmakers will gather on the House floor to formally cast their votes for speaker. A candidate must receive 218 votes to win the position.