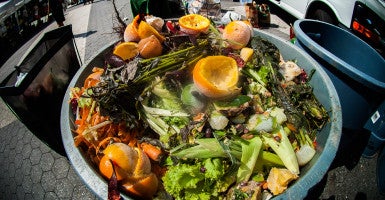 The Obama administration wants to reduce the amount of food waste. (Photo: Richard B. Levine/Newscom)

The U.S. Department of Agriculture has announced an initiative to reduce national food waste by 50 percent by 2030.

The project will aim to improve “food security” as a whole while conserving natural resources. The efforts of the initiative will require the federal government to partner with various organizations, including charitable organizations, faith-based organizations, the private and local sectors, and state and tribal governments.

“The United States enjoys the most productive and abundant food supply on earth, but too much of this food goes to waste,” said Vilsack in the USDA’s official announcement.

According to the USDA news release, “[e]xperts have projected that reducing food losses by just 15 percent would provide enough food for more than 25 million Americans every year, helping to sharply reduce incidences of food insecurity for millions.”

However, there are questions as to why these issues have remained at the forefront of American policy goals.

“It’s ironic that the USDA is so concerned with food waste. If they wanted to make a difference, they would get rid of their inflexible school meal standards that has led to tons of food waste and disrespected local communities, parents, and students,” said Daren Bakst, a research fellow in agricultural policy at The Heritage Foundation.

“If we are concerned about food availability, our focus should be on food prices, as we saw with recent food riots in other countries,” Bakst added. “Policies that drive up food prices are irresponsible. Climate change policies, which drive up energy costs for agricultural producers, are the poster child of this irresponsible action.”

In a statement, McCarthy said, “Let’s feed people, not landfills. By reducing wasted food in landfills, we cut harmful methane emissions that fuel climate change, conserve our natural resources, and protect our planet for future generations.”

The federal government has made strides in the past to conserve food and reduce waste. The USDA and EPA launched the U.S. Food Waste Challenge in 2013, which encouraged organizations and leaders to contribute the most efficient practices on reducing, recycling, and recovering food loss and waste.

The USDA has even introduced an app, called “FoodKeeper,” to further its food waste reduction efforts. According to the iOS app description, “FoodKeeper can help consumers use food while at peak quality and reduce waste.”

The USDA and EPA are also seeking to expand their efforts beyond the federal government by  encouraging  the private sector to become more aggressive about reducing food loss and waste.

Regarding food waste, Bakst said, “We aren’t about to run out of food.  That doesn’t mean bad policies won’t create food production challenges, such as government-imposed obstacles to technological innovation and climate change policies that will drastically drive up prices for agricultural producers and all Americans.”

The new environmental goals of the federal government were announced one week before world leaders meet at the U.N. General Assembly in New York. The leaders will be discussing sustainable development practices within food production and consumption.