As Pope Francis Visits the US, Here Are 5 Facts About American Catholics 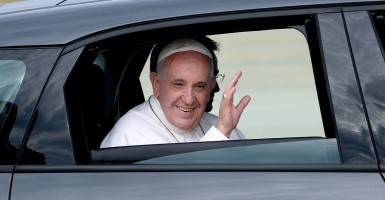 Gallup has released a list of five facts about American Catholics in honor of Pope Francis’ first visit to the United States.

According to Gallup’s report:

Gallup has tracked the percentage of Catholics since 1948 and says the number “has remained fairly steady” since then, averaging at 25 percent.

Gallup adds that Rhode Island has the highest percentage of Catholics at 45 percent, and Mississippi has the lowest at 8 percent.

Gallup’s report states that the political affiliation of American Catholics “is remarkably similar to what is found in the overall population.”

For comparison, Protestants, Mormons, and Jews are more likely to identify with one political party than the other.

According to Gallup, “the majority of Hispanics identify as Catholic.” Sixty-one percent of Catholics surveyed identified as white and 3 percent as black.

For comparison, of Protestants surveyed, 8 percent identified as Hispanic, 17 percent as black, and 70 percent as white.

Of those surveyed, 44 percent of Catholics and 45 percent of Protestants told Gallup they had attended church services within the last week.

According to Gallup, historically, Catholics were more likely to attend church services weekly, but they “lost their church attendance advantage over Protestants in the 1990s.”