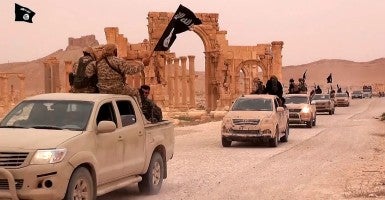 The cover of a new survey by Chicago Council of Global Affairs entitled “America Divided: Political Partisanship and US Foreign Policy” creates the impression that Americans are deeply divided over U.S. foreign policy.

Yet, according to the research presented inside that is not consistently so. In some regards, opinion on foreign policy is converging, even though some areas of deep philosophical disagreement remain along party lines.

In the interpretation of their own facts, the editors of the study may have revealed more about their own mindset than that of the American public surveyed (a sample of some 2,000 individuals taken in May).

At the unveiling in Washington last Wednesday some tried to argue that this shows partisanship as fueling the “deplorable” lack of support among Republicans for President Obama’s Iran deal.

Looking at the data, however, this might not be so.

Americans across the board are convinced the United States needs to play an active role in world affairs.

Of Republicans, 69 percent favored an active role by the U.S. in world affairs. This is compared to 67 percent of Democrats saying the same (Independents were at 57 percent). All three groups registered an uptick from recent years.

One reason undoubtedly is that concern about Islamic fundamentalism has risen sharply among all three groups from 2014, admittedly with Republicans being the most concerned at 66 percent, to Independents at 56 percent, and Democrats at 48 percent.

Startlingly, among all three groups, maintaining U.S. military superiority is considered the most effective approach to achieving the foreign policy goals of the United States with Democrats at 83 percent – only just behind Republicans who came in at 86 percent, and Independents lagging a bit at 74 percent.

Americans also broadly agree on the critical threats facing the United States including; international terrorism, cyberattacks on US computer networks, the rise of violent Islamic groups in Syria and Iraq, and the possibility of unfriendly countries becoming nuclear powers.

The only difference is that Democrats put climate change as number five in a ranking of the top five threats (Republicans and Independents left it out).

The partisan differences (which are so concerning to the authors) are entirely predictable and persistent.

For instance, Climate change is viewed as a critical threat by 58 percent of Democrats, while only 17 percent of Republicans think so (and 38 percent of Independents).

Democrats favor treaties and international institutions more than Republicans and illegal immigration is another highly divisive issue, not surprisingly.

At the very least, these results show that Americans would accept a more muscular stance towards the rise of ISIS and al-Qaeda and its affiliates, certainly more than what has been adopted by the Obama administration.

But the results also suggest that foreign policy elites tend to see (and perhaps feel) deeper division than actually exist in the American public.