How Obamacare Will Cost Native American Tribes Millions of Dollars 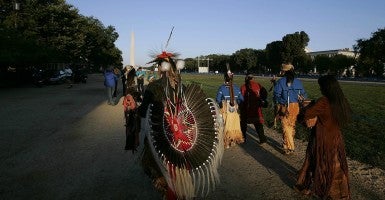 Native American tribes are pushing back against a provision of Obamacare mandating that tribal governments provide health insurance to their employees. Tribal leaders say it’s a “misinterpretation” of the law that will cost millions of dollars.

When Congress passed the Affordable Care Act in 2009, lawmakers exempted Native Americans from the individual mandate, shielding them from having to pay a fine for not having insurance. Native Americans could, however, purchase health insurance on the federal exchange, HealthCare.gov, and have access to substantial tax credits, driving down the cost of their plans.

Rebecca Bishop, a member of the Northern Arapaho Tribe in Wyoming, purchased a plan on the federal exchange costing $948 a month. According to an affidavit filed with the District Court in Wyoming, Bishop works as a swing shift manager at the tribe’s Cee Nu Ku cafe and suffers from rheumatoid arthritis and diabetes. Bishop received a monthly subsidy of $815 and pays just $133 a month in premiums, with no co-pays or deductible, she said.

Congress did not, however, exempt Native American tribal governments from Obamacare’s employer mandate, which is already in effect for large employers and goes into effect for small businesses with between 50 and 99 employees next year. Now, tribal governments are beginning to realize the effects the employer mandate could have on reservations’ economies and the lives of their employees.

“This is what happens when Congress short circuits regular order, and doesn’t go through the relevant committees, and take the time to mark it up, and debate it the right way, and rush a complicated bill through,” Ed Haislmaier, senior research fellow in health policy studies at The Heritage Foundation, told The Daily Signal.

“The other large issue is, from a policy perspective, the law also provided a very generous subsidization of coverage through the exchange for Native Americans who didn’t have access to other coverage,” he continued. “This will essentially negate those provisions for a lot of members of tribes.”

>>> Commentary: Census Confirms Health Care Coverage Expanded in 2014, but Misses That Most Expansion Was Through Medicaid After learning that tribal governments were not exempt from the employer mandate, the Northern Arapaho Tribe began offering employer-sponsored health insurance to its employees, costing the tribe more than $6.5 million.

If the tribe decided to opt out of the employer mandate, it would pay approximately $2.2 million in fines to the Internal Revenue Service. Despite the high cost of abiding by the employer mandate, not offering coverage to its employers was not an option for Northern Arapaho tribal leaders.

“Based off business decisions, it would be cheaper for us not to provide health care and pay the fine,” Andrea Clifford, assistant general manager of the Wind River Hotel and Casino and county commissioner for Fremont County, told The Daily Signal. “But our leadership, me included, wanted to provide group-sponsored health insurance and the benefits because we know that statistically, most people are struggling with their health.”

Clifford, 43, has worked at the Wind River Hotel and Casino for the last decade and oversees its human resources, payroll, and benefits departments. She and her husband have eight children, and Clifford has coverage through her employer.

Clifford understands the value of having quality health insurance—her mother died of kidney failure at 59 after waiting for a referral from the Indian Health Service to see a specialist—and pushed for tribal employees to purchase coverage on the exchange.

“I saw people who had life-threatening obstacles affect them—cancer, diabetes,” she said. “You have someone who took the small amount of [insurance] and understood what it means, and they had health scares. They were able to go see specialist and things were paid for. They didn’t have to wait for a referral that was denied.”

But Clifford is frustrated that tribes are required to participate in the employer mandate.

“The large employer mandate—I was very surprised. When [Congress] makes wide-sweeping legislation, they always tend to forget about the sovereignty rights of Indian tribes,” she said. “With this legislation, we have a right, and we have to defend that every day: sovereignty.”

The Northern Arapaho’s tribal government has already begun offering its employees coverage through the Federal Employees Health Benefits Program, but many employees have seen the cost of their premiums rise, as they are no longer eligible for the subsidies available on the exchange.

“It’s making those small decisions,” Clifford said. “Whether it’s $30 more a month because the premium went up … it’s more money out of their pockets that affects their daily lives.”

>>> This Obamacare Co-Op Was Supposed to Make Money. Instead, It Lost Over $15 Million.

The Northern Arapaho Tribe filed a lawsuit against Department of Health and Human Services Secretary Sylvia Mathews Burwell and Department of Treasury Secretary Jack Lew last year that called for an exemption to the employer mandate.

According to court documents, the tribe alleged that HHS and the IRS “perhaps inadvertently, created unlawful barriers that block Native Americans from accessing the premiums tax credits and cost-sharing exemption that Congress provided.”

Lawyers for the government argued that Obamacare’s plain text specifically lists government employers—including tribal governments—as a large employer and one that must, therefore, provide its employees with health insurance coverage, according to court documents.

“Congress knew how to—and could have—exempted tribal employers from [the employer mandate], but did not do so,” the government argued. “Instead, Congress included all employers, governmental or otherwise, within [the section].”

In July, a district judge in Wyoming dismissed the Northern Arapaho’s case, arguing, in part, that Congress fully intended for tribal governments to be required to participate in the employer mandate, despite it exempting Native Americans from the individual mandate.

The tribe filed an appeal with the U.S. Court of Appeals for the 10th Circuit last month.

“The Northern Arapaho Tribe does not believe that Congress intended to harm working-class Indian people in the Affordable Care Act,” Dean Goggles, head of the Northern Arapaho Tribe’s Business Council, told The Daily Signal in a statement. “Unfortunately, the IRS has misinterpreted the law, and that action will cost Indian tribes millions of dollars.”

An official with the Department of Health and Human Services told The Daily Signal that implementing new regulations that would override the employer mandate would be difficult in the wake of the district court’s decision. However, the official said that the agency recognizes the challenges the employer mandate poses for tribes and is willing to work with Congress. In an attempt to protect Native American tribes from the employer mandate, Republican members of Congress from Idaho, Montana, Oklahoma, and South Dakota proposed their own fix to the high costs facing tribes participating in the provision.

Called the Tribal Employment and Jobs Protection Act, the bill would prevent tribes from having to pay either the fines or costs associated with the provision.

“In South Dakota, tribes often serve as the primary employer of their community members,” Thune said in a July statement. “This mandate would have a significant negative impact on tribes and tribal citizens by diverting much-needed valuable resources away from economic development and important programs toward this burdensome law.” The Tribal Employment and Jobs Protection Act has the support of a number of tribes across South Dakota and Montana, as well as the National Indian Health Board, a Washington, D.C.-based nonprofit that assists tribal governments with health care-related issues.

“The federal trust responsibility of the tribes requires the federal government to provide health care to American Indians and Alaska Natives,” National Indian Health Board Executive Director Stacy Bohlen said in a statement. “The employer mandate of the Affordable Care Act is simply unaffordable for many tribes who will cut essential government services to pay this obligation. The employer mandate on tribal employers contradicts not only the trust responsibility, but provisions in the Affordable Care Act which exempt American Indians and Alaska Natives from the individual mandate.”

The bills in the House and Senate have not yet passed.

>>> Commentary: Next Obamacare Issue: The Definition of ‘Small Employer’