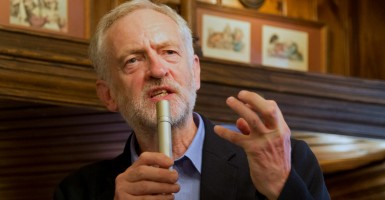 Jeremy Corbyn is hardly a household name in the United States, but his election win has raised eyebrows on this side of the Atlantic and has been prominently featured on the pages of The Wall Street Journal, The Washington Post, and The New York Times. With good reason: there is growing nervousness in Washington in the wake of Corbyn’s election as leader of the Labour party. Corbyn, after all, is the antithesis of Tony Blair, whose instincts were to stand shoulder to shoulder with the United States in the aftermath of the 9/11 terrorist attacks. Blair’s successors as Labour leader, Gordon Brown and Ed Miliband, were less vociferously pro-American but were, broadly speaking transatlanticists, who understood the importance of the alliance with the U.S.

Corbyn may have his admirers on the American left who seek to embed the seeds of Socialism in U.S. political discourse and see his victory as a positive omen. But Corbyn’s stunning ascendance will prompt far more alarm in America than cheers of joy. Corbyn’s win will have significant implications for the Anglo-American Special Relationship, and Corbyn as prime minister of Great Britain in 2020 would be a truly nightmarish scenario for Washington policymakers, regardless of who wins the race for the White House next year.

There are several key areas where Corbyn’s victory will impact U.S.-U.K. relations in the coming years. It will be felt most immediately on the Syria/ISIS front. Corbyn has made it clear that he opposes British military action in Syria, complicating David Cameron’s plans for a parliamentary vote on the issue later this month. Without Labour support, a vote in the Commons will be a far riskier proposition for the prime minister, with his wafer-thin majority. Continued British non-participation in air strikes in Syria would significantly weaken American efforts to build a broad-based international coalition to defeat ISIS. Corbyn has also made it clear that any deployment of British forces abroad must be mandated by the United Nations Security Council, effectively giving the Russians and Chinese the final say over any British intervention in Syria, or anywhere in the world, for that matter.

Corbyn is also on record comparing the actions of U.S. forces in Iraq during the 2004 Fallujah campaign to the current actions of ISIS, drawing a moral equivalence between the U.S. military and brutal Islamist terrorists, a perspective that will hardly endear him to America’s military commanders and the American people. He has spoken of the Iranian-backed terrorist group Hezbollah as “friends” and has been a fierce critic of Israel, America’s closest ally in the Middle East.

Another major area of concern for Washington is Corbyn’s favorable disposition toward Moscow and his belief in appeasing Vladimir Putin. Corbyn is opposed to NATO and has expressed the view that Britain would be better off outside of the alliance. He has accused NATO of pushing Russia into a corner, declaring in March last year that “NATO has sought to expand since the end the Cold War. It has increased its military capability and expenditure. It operates way beyond its original 1948 area and its attempt to encircle Russia is one of the big threats of our time.”

Corbyn’s leadership of Labour is unlikely to prompt a shift in David Cameron’s robust approach toward Russia, but it will strengthen the hand of those in Europe, on both the left and right, who seek to accommodate Putin’s aggression against Ukraine and weaken economic sanctions against Moscow. If Corbyn becomes PM in 2020, and forces a British withdrawal from NATO, the impact on the transatlantic alliance and the Special Relationship will be catastrophic. A NATO without Britain is unthinkable and, if it becomes a reality, could result in the collapse of the entire alliance.

Washington will also be deeply concerned by Corbyn’s calls for cuts in British defense spending, which would significantly weaken Britain’s ability to fight alongside the United States. The Special Relationship is at its core a military and intelligence partnership, powered by the willingness of the United States and the United Kingdom to fight alongside each other on the battlefield against common enemies. A diminished British military, as Corbyn envisions it, would lose that ability, weakening the engine of the free world in the face of a growing array of threats. Corbyn also opposes Britain’s trident nuclear deterrent and would strip Britain of its status as a nuclear weapons power, just as the Russians are strengthening their power in Europe, even regularly flying bombers off the coast of Britain.

There can be no doubt that Jeremy Corbyn is determined to take Britain down the path of isolationism, even surrender to its enemies. He is at heart a short-sighted extremist who believes that Britain must retreat from the world. As he puts it: “Can we afford to have global reach as a country of 65 million people on the North West coast of Europe? Should we not be more interested in supporting international law and working with the U.N. rather than deciding that we as a small country can actually afford this global intervention role?” Is it any wonder that Cristina Kirchner, the Argentine anti-British despot who regularly threatens the peaceful British inhabitants of the Falkland Islands, is an admirer of Mr. Corbyn?

Corbyn’s vision is of an emasculated Britain, shorn of its nuclear defenses, with a gutted military and even cast adrift from the NATO alliance. This is a disastrous projection of Britain’s future that will have significant implications for the United States, as well as for Britain’s allies across the world, from the Baltic States to Australia.

British leadership matters on the world stage, and when Britain stands together with the United States, the world is a far safer place. Corbyn’s rise to Labour leader is the biggest threat to the Special Relationship since the end of the Cold War. Mr. Corbyn is offering the British people a path to decline, defeat, and ruin—it is a road they should be wary of taking.