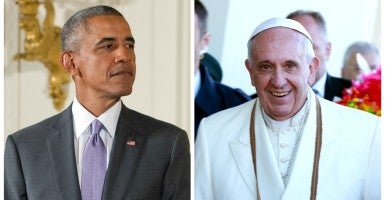 Maybe we shouldn’t expect anything much from a president who gave Queen Elizabeth an iPod filled with his own speeches, and who gave former British Prime Minister Gordon Brown a set of American movies on DVDs that didn’t work in the U.K.

But the way this White House is choosing to “welcome” Pope Francis is appalling.

When Francis arrives at the White House on Wednesday for a welcome reception, his greeters will include “Episcopal Bishop Gene Robinson, the first openly gay Anglican bishop who’s now a senior fellow at the Center for American Progress, a think-tank with ties to the Democratic Party, and Sister Simone Campbell, executive director of the Catholic social justice lobby Network, and a leader of the ‘Nuns on the Bus’ advocacy tours,” reports the Associated Press.

According to her biography on Network’s site, Campbell played a crucial role in promoting Obamacare’s passage:

During the 2010 congressional debate about health care reform, she wrote the famous ‘nuns’ letter’ supporting the reform bill and got 59 leaders of Catholic Sisters … to sign on. This action was cited by many as critically important in passing the Affordable Care Act. She was thanked by President Obama and invited to the ceremony celebrating its being signed into law.

You know who didn’t advocate for Obamacare’s passage? The Catholic bishops in the United States who opposed the bill.

After Obamacare passed, Cardinal Francis George, who passed away this year, wrote, “We as Catholic bishops have opposed its passage because there is compelling evidence that it would expand the role of the federal government in funding and facilitating abortion and plans that cover abortion.”

Nor is Robinson better. He is the author of “God Believes in Love: Straight Talk About Marriage,” a book that, First Things wrote, “seeks to convince the reader of the need for legal gay marriage in all fifty states and at the federal level.”

While Pope Francis’ “Who am I to judge?” comment drew plenty of media attention, he is no supporter of gay marriage. In January, he said, “The family is threatened by growing efforts on the part of some to redefine the very institution of marriage, by relativism, by the culture of the ephemeral, by a lack of openness to life.” A Vatican official confirmed to Catholic site Crux that Francis was alluding to same-sex marriage.

LGBT advocacy group GLAAD announced Wednesday that “the White House has extended an invitation for GLAAD and LGBT Catholic leaders to attend the White House reception for Pope Francis,” and that two representatives from their organization would be attending.

Also attending will be Mateo Williamson, “a former co-head of the transgender caucus of Dignity USA, a group for LGBT Catholics … [who] said the Vatican’s disapproval of his presence at the ceremony ‘speaks to the necessity for continued dialogue’ between transgender Catholics and the church hierarchy,” reports the Wall Street Journal.

All of this makes it not exactly shocking that the “Vatican has taken offense” at Obama’s list of invitees and that “the Holy See worries that any photos of the pope with these guests at the White House welcoming ceremony next Wednesday could be interpreted as an endorsement of their activities,” as the Wall Street Journal additionally reported.

It’s no secret that on a variety of issues, such as marriage and the sanctity of life, including for those in the womb, Obama and Francis don’t see eye to eye.

But Francis is coming as a guest to the United States, and HE deserves to be treated cordially—not thrust into a hostile reception with people who have avidly advocated the very policies he and the Catholic Church are so firmly against.

The White House downplayed the matter Thursday, with press secretary Josh Earnest saying, per Fox News, “I’d warn you against drawing a lot of conclusions of one, two or three people on the guest list because there will be 15,000 other people there.”

But the officials running the White House aren’t fools. It’s implausible they were unaware of the potential such controversial figures could make in the media if they chose to announce their invites to the reception with Francis.

Right now, Francis and his team are getting a crash course in the White House’s hostility toward Catholicism. When he returns to Rome, it may be with a better understanding of what American Catholics fighting to stay true to their beliefs and live in accordance with the laws are facing more and more in an increasingly intolerant United States.