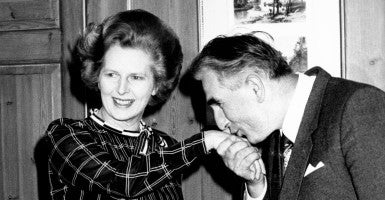 Does religion play a role in British politics?

Dr. Eliza Filby, academic, writer, and businesswoman, spoke at The Heritage Foundation Wednesday about her book “God and Mrs. Thatcher: The Battle for Britain’s Soul.”

In her book, Filby delves into a topic of how she believes that former Britain Prime Minister Thatcher’s faith is at the root of her politics and leadership.

“Margaret Thatcher drew on the tales of self-reliance, hard work, and moral restraint as the sober antidote for Britain, then drowning under the constraints of excessive bureaucracy, industrial strife, and economic decline,” Filby stated.

“The Iron Lady positioned herself as the hardworking Methodist from provincial England, armed with a handbag and conviction, determined to kick the ruling elite into shape.”

Filby made the case of how Thatcher’s Methodist upbringing and lay preacher father influenced her life and her “bold approach” to politics. The starting point for writing her book was based on the idea of how Britain created Thatcher.

Growing up, Thatcher’s family would attend church three times every Sunday, and the family would pray before and after meals, among other rituals.

This background shaped her values and qualities. Years later, as a leader of the country, Thatcher would echo words from her father’s sermons.

“Strangely enough, when I started interviewing Margaret Thatcher’s aides, ministers, and confidants,” Filby said, “the standard response I got was, ‘Margaret Thatcher never talked about religion; never heard her mention it once; she wasn’t religious.’”

She concluded that perhaps people had been looking at Thatcher’s faith in the wrong light and held a “narrow view and perhaps almost secular view of what faith actually is and how faith manifests itself.”

Filby said Thatcher had “intense personality piety.” Yet many in the public never knew her habits of attending church, reading religious books, and prayer.

A Conservative Party leader, Thatcher served as the first female prime minister of Britain from 1979-1990.

While introducing Filby on Wednesday afternoon, Dr. Nile Gardiner, director of the Margaret Thatcher Center for Freedom at The Heritage Foundation and former aide to Lady Thatcher, said that Thatcher tried to roll back socialism, end communism, and resurrect Britain.

“For Thatcher, the fight against socialism at home and communism abroad was a fight for the sovereignty of liberty and individual free will. When victory finally came, Thatcher heralded it not as an economic nor even as a diplomatic success, but a moral victory,” Filby said. “Capitalism was presented as the natural order, one from which both Britain and Eastern Europe had temporarily diverted, but had been steered back onto the right path once more.”

According to Filby, in a speech given by Thatcher to the Polish Senate in 1991, she said: