What Happens When Americans Stop Revering the Constitution? 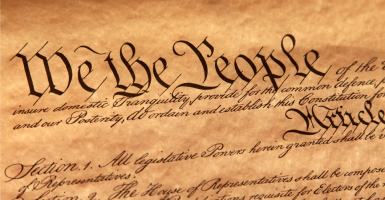 On Constitution Day, we offer our gratitude to the framers of the Constitution while honoring the document they produced. (Photo: istockphoto)

National holidays are about gratitude.

On Veterans Day we honor veterans by offering our gratitude for their service and sacrifice. On Thanksgiving we offer our appreciation, as Washington explains in the first Thanksgiving Day Proclamation, to God and nation.

Today, on Constitution Day, we offer our gratitude to the framers of the Constitution while honoring the document they produced.

Having such a holiday makes America unique: rather than elevating our founders to the status of saints or trusting in hearsay reports about their deeds, we look upon them as statesmen of remarkable genius.

While other nations often embellish their mythical origins, our records are open, and our founders require no mythology to demonstrate their superiority.

Comparing what occupied Founders’ minds and ours is helpful.

At stake was founding a great nation—the first of its kind—that protected natural rights, established commerce and scientific innovation, all of which would lead to unprecedented prosperity. In carrying this out, much of the world has followed in their footsteps, with varying degrees of success.

On the 228th anniversary of the Constitution’s birthday, we might remember our great fortune to have had a group of geniuses at the helm of our state, while asking ourselves if anyone would be capable of writing the Constitution anew.

Jefferson called the work of our Founders “unquestionably the wisest Constitution ever yet presented to men.”

Its ingenuity and depth is sometimes difficult to fully appreciate because we are so thoroughly engrossed and formed by the order it created. Many Americans tend to believe that the key elements that define our nation are spontaneous and natural, but they were established by the Constitution.

For example, the Constitution established the conditions for our nation’s many miraculous works—not the least comes from technological innovation and the progress of science.

In Article 1 Section 8, the Constitution secures intellectual property rights which enkindles both the ambition for innovation and delivers on the promise of wealth to individual innovators and inventors. By creating these conditions, the Constitution spreads the entrepreneurial spirit. A telling example of this was seen in the 1990s, when the inventor of the M-16, Eugene Stone, met the inventor of the AK-47, Mikhail Kalashnikov. The former flew in on his own plane; the latter could barely afford a plane ticket to Moscow.

Another example is free markets, which work only with the establishment of respect and protection for property rights by sufficient governmental force, combined with sufficient limits on that force.

But these are only two among many possible examples of how to rediscover the specific means by which it has secured “the blessings of liberty” that we enjoy today.

James Madison did not think that all citizens would clearly understand every theoretical aspect of the Constitution. In fact, the workings of the “wisest and freest governments,” Madison writes in Federalist 49, do not require perfect understanding of all citizens, but the government’s “stability” depends on reverence for it.

What happens when this reverence is lost?

In our time, preserving reverence is still an issue, but too much stability has become the direct obstacle. As Tocqueville predicted, it will not be revolutions that threaten our constitutional order, but the centralization of an administrative state which will silently take more and more freedom away from citizens while subverting the Constitution in the process.

The modern administrative state’s disregard for the Constitution’s separation of powers and careful system of checks and balances not only subverts our Constitution but perhaps more importantly diminishes its respectability.

Oddly enough, in such circumstances, only public outcry originating in reverence for the Constitution could remedy these trends.

By celebrating the past, national holidays aim to unify a people’s sentiments. But, as Lincoln observes, the further we stray from the events we honor, “like everything else, they must fade upon the memory of the world, and grow more and more dim by the lapse of time.”

How do we do this with our Constitution? Perhaps by recalling that the Constitution does not operate of its own accord; that it does not rule providentially over us.

Its operation requires understanding and reverence. This can come only from knowledge of the benefits it has bestowed upon the American people, which we attempt to safeguard by celebrating it nationally, at least once a year.