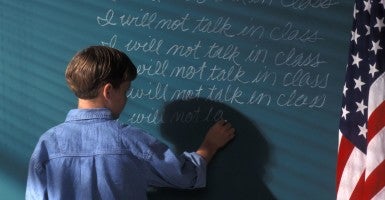 As school policies have gotten stricter, students in schools across the United States have been disciplined for things like playing make-believe games. (Photo: Ingram Publishing/Newscom)

Ahmed Mohamed, a 14-year-old student in Irving, Texas, made headlines yesterday after local authorities arrested him for bringing a homemade clock to his high school.

According to news reports, the teen showed his creation to an English teacher before being taken out of school in handcuffs.

Mohamed is not the first student to face the unintended backlash of zero-tolerance policies at schools in the United States. Here are nine other instances in recent years where students were treated like criminals for seemingly innocuous behavior:

1. A Pennsylvania kindergartner was suspended for talking about shooting her Hello Kitty bubble gun while waiting in line for the bus in January 2013. According to reports, the bubble gun was not with her at the time. When pressed to explain why she brought up the gun, the little girl told a professional counselor that one of her friends likes Hello Kitty. Due to her young age, the girl’s suspension was cut down to two days.

2. In September of 2014, an 11-year-old boy was suspended from his Virginia school for 364 days after having a leaf that resembled marijuana in his backpack. As the Daily Signal previously reported, the school knew the leaf was not marijuana but still suspended the boy. He was charged with marijuana possession in a juvenile court. Months after the fact, the charges were dropped after the leaf field-tested negative for marijuana three times.

3. A 15-year-old boy was convicted of disorderly conduct, a step down from possible felony wiretapping charges, after recording seven minutes of audio on his school-issued iPad in 2014 during a math class at his Pennsylvania high school. He wanted to use the recording as evidence that he was being bullied at school. The alleged bullies were not investigated, while the boy was kicked out of his special-needs math class.

4. Eighteen-year-old Jordan Wiser spent 13 days in jail and faced felony charges for possession of a weapon for carrying a pocket knife in an EMT vest that was stored in a car parked on school property in Ohio. The knife was said to be in violation of school policy. A first responder and certified emergency vehicle operator, Wiser had the knife in his vest in case he needed to cut through seat belts in the line of duty.

5. Tenth-grade student Da’von Shaw from Ohio had planned to conduct a healthy breakfast demonstration for his speech class by packing craisins, an apple, and a knife to cut the apple in his school bag. But upon seeing the knife, Shaw’s teacher immediately confiscated the utensil. Shaw was reportedly suspended from school for five days and received a suspension letter that charged him with bringing a weapon to school.

6. In Texas, nine-year-old Aiden Steward was suspended for making a terrorist threat after bringing a ring to class and telling another boy the “magic” ring could make him disappear. As it turned out, the boy had just seen the movie “The Hobbit: The Battle of the Five Armies.”

7. Alex Evans, a seven-year-old from Colorado, found himself suspended from school after throwing an imaginary grenade into a sandbox filled with pretend evil forces. The second grader said he was trying to be a hero to “rescue the world” from make-believe bad guys.

8. In Maryland, a seven-year-old second-grader was suspended after chewing a Pop-Tart breakfast pastry into the shape of a gun. It was reported that he had said, “Look, I made a gun.”

9. Thirteen-year-old Kyle Bradford faced detention for sharing his lunch at school in California. After seeing a friend unhappy with his own cheese sandwich, Bradford gave his classmate his chicken burrito. The school had a policy in place to prevent students from exchanging meals. “I just wanted to give mine to him because I wasn’t really that hungry and it was just going to go in the garbage,” Bradford told news affiliate KRCR-TV.