‘Safest School in America’ Has $400K Security System. Should Other Schools Catch Up? 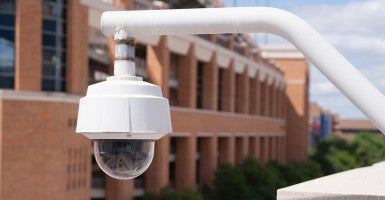 A security camera sits outside of a high school. (Photo: iStockphoto)

Monday’s incident at Delta State University marks the ninth time that one or more persons have died during a school shooting event in 2015, according to the website Everytown.org, which tracks school shootings in the United States.

A high school in suburban Indiana is taking extra steps to steel itself against such tragedy and has been called the “Safest School in America” for doing so.

Southwestern High School in Shelbyville, Ind., was featured in a morning segment produced earlier this month by the Today Show. In the video, the school is depicted as being outfitted with bulletproof doors, hallway cameras that feed directly to the local sheriff’s office, and even ceiling smoke canisters that can be detonated in hallways to visually impair an attacker or active shooter.

The top-of-the-line security system—which can be activated in the event of an emergency by teachers who wear special key fobs—has been called “revolutionary” and is reported to have cost $400,000. It was installed after the Indiana Sheriff’s Association selected the school as a test site.

“I think that Newtown, Sandy Hook, really made people understand, made us all understand that this could happen to us,” Dr. Paula Maurer, Southwestern Consolidated Schools superintendent, told local affiliate Fox59. “Now is the time to do something about it. We have some answers. We have the technology. We have ways to make our kids safer and we have to do it.”

The system came at no cost to Southwestern High School after Net Talon, the Virginia security company behind the design, offered to fund the installation. The school also used grant money to cover some costs.

It raises the question of whether such a system could be implemented elsewhere and, perhaps more glaringly, how it would be funded.

“I don’t know if there’s anything more pressing than safety,” says Lindsey Burke, a Will Skillman Fellow in Education at the Heritage Foundation’s Institute for Family, Community, and Opportunity. “And we know from the data that when you interview parents, their number-one concern when they’re looking for a school, way before academics, is safety.”

At the same time, Burke advises that such a system, if it were to be considered, should be handled locally as opposed to being funded by federal initiatives or grants.

“If you think about a classroom with 25 students in it, we’re spending about $300,000 per classroom today,” Burke says. “And teacher salary being around $60,000, generously, there’s a lot of additional money in the classroom that we’re not really sure what that’s going towards.”

David Muhlhausen, a research fellow in Empirical Policy Analysis at The Heritage Foundation, who specializes in security issues, agrees that while aspects of the security system seen at Southwestern High are attractive, “the government throws a lot of money around to grant programs and there’s little accountability to how the money is used.”

“If locals raise the money, and it’s from their own pocket, they’re more likely to make sure it’s used well,” Muhlhausen says.

Muhlhausen also notes that with school shootings being a “low-probability event,” it is perhaps unlikely to think local governments would be willing to shift resources to cover the acquisition of such a system.

“They’re going to do the calculus and, you know, the only time it’s worth spending that kind of money is after the fact, and that’s very unfortunate,” Muhlhausen says.

As to which aspects of Net Talon’s security system are likely to have the largest impact, and should perhaps be attained first, the expert points to secure doors.

“A lot of schools should have secure doors, in that they’re bulletproof and can’t be broken into,” Muhlhausen says. “One of the big problems with school shootings is that law enforcement officials are trained to secure a location before they go in. So what happens is, the kids are sitting ducks. At Columbine, the police got intelligence reports that there were explosives involved, and were not prepared to handle that, and those two shooters had extra time.”

For now, it remains to be seen whether other school districts will follow suit.

“I’m all for technology and innovation, but it makes me sick to my stomach that it’s come to this,” Today Show co-anchor Matt Lauer said after viewing the clip. “It really does.”