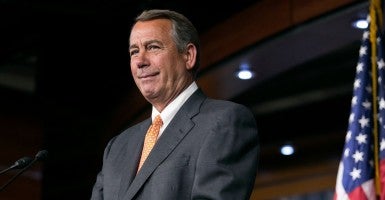 Pastors from House Speaker John Boehner's (above) district sent a letter urging him to defund Planned Parenthood. Although pro-life, Boehner has indicated that he will not risk a government shutdown over Planned Parenthood funding. (Photo: Congressional Quarterly/CQ Roll Call/Newscom)

A group of pastors in House Speaker John Boehner’s congressional district are encouraging him to defund Planned Parenthood.

In a letter, the pastors asked Boehner, R-Ohio, to support efforts to defund Planned Parenthood in a spending bill, and to meet with them to hear their concerns.

In an interview with The Daily Signal, Johnathan Newman, the pastor of Koinos Church in Troy, Ohio, the author of the letter, said that he and fellow pastors felt the need to “do something” about the undercover videos released by the Center for Medical Progress showing Planned Parenthood executives discussing the trafficking of aborted fetal organs. (Spokespersons for Planned Parenthood have denied illegal conduct.)

“So we said, ‘Look, why don’t we write a letter to our representative, who happens to be speaker of the House?’” said Newman.

As of Monday, 70 pastors from Boehner’s district had signed the letter, along with an additional 15 from nearby districts.

“This is a grassroots movement of pastors and leaders in the community willing to come together for what is right,” Newman said. “This is just in our district, but I’m sure there are many across the country who feel the same way.”

Boehner, who is pro-life, has indicated he is unwilling to shut down the government over Planned Parenthood funding due to the White House’s indication that President Barack Obama will not approve a spending bill that defunds Planned Parenthood.

But Newman said he wants to “encourage” Boehner to be “bold.”

“Any government that would force its people to pay for such despicable acts—abortion in general and Planned Parenthood’s actions specifically—is a government that should be defunded.”

Newman said that Boehner and other lawmakers shouldn’t fear the ramifications of a government shutdown.

“They see it as political jeopardy,” Newman said. “It is the opposite. We are craving leaders that will stand up and do what is right because it is right. If you want to see the American people applaud you, take this step now.”

Boehner’s office invited the pastors to meet with the speaker, and 10 of the signatories will represent the group as a whole in a meeting with him on Thursday.

“This is not a political matter; this is a God matter, a humanity matter,” Newman said. “He is our representative, but he cannot speak for us unless we speak. We want him to know that we are praying for him, we want to assure him to not be afraid.”

The text of the letter is below:

Congratulations on the birth of your new baby grandson! We are praying for you, Sir, and we are thankful for your pro-life conviction that you have demonstrated in numerous ways.

We, as pastors of local congregations and parishes of Ohio’s 8th Congressional District, and as leaders and representatives of those congregations, want you to know how all of us have been profoundly horrified by the unimaginable actions exposed in the videos of Planned Parenthood.

We share in your pro-life conviction and believe that God is compelling us to take greater action personally, and for our congregations to do so as well, to stand against Planned Parenthood and their detestable practices, and to put an end to the murder of innocent human lives.

As our representative and our voice in Congress, we plead with you to hear our cry for help. We implore you to also hear the cry of the unborn who have no voice. We urge you to do the two following things: one, lead Congress to defund Planned Parenthood via the budget approval process, and two, please come to District 8 and meet with us as soon as possible. We desire to be assured that your resolve and plan of action will be sufficient to get this accomplished in the current budget cycle.

The time for action is now. This very moment in history is the greatest opportunity since Roe vs. Wade to take decisive action toward ending government funding of abortion. If pro-life leaders in Congress will not take this action now, when will they?

We understand you have a heavy burden on your shoulders as a leader of this great country.

We believe this point in history is much like that of Esther’s time and that you have been placed by God for “such a time as this.” Rest assured, Mr. Boehner, our prayers are with you that you would seize this moment to stand for what is right before God and man.

Thank you for taking the time to read and respond to our request. God has given us the greatest country in the world and we cry out to Him for restoration. We know you want this country to be great as well. We want to help you. Let us join together in this first step of returning to what is right and holy before Him.