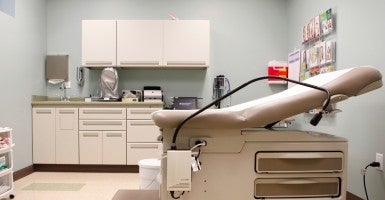 Planned Parenthood of South Atlantic in Columbia and Greenville Women's Clinic have been suspended by the South Carolina Department of Health and Environmental Control for violating state law. (Photo: Aaron Sprecher/EPA/Newscom)

The South Carolina Department of Health and Environmental Control has suspended two of three abortion clinics in the state—including a Planned Parenthood facility—for violating state law, the agency announced Friday.

The clinics—Planned Parenthood of South Atlantic in Columbia and Greenville Women’s Clinic—were found by the DHEC to be in violation of state laws and regulations and must “submit a plan of correction to DHEC by September 28, 2015, show proof of staff training, and pay any assessed penalties in order to lift their suspension orders or face closure.”

“DHEC remains committed to ensuring that all clinics operating in South Carolina are safe and in compliance with state and federal laws,” DHEC Director Catherine Heigel said in a statement. “We take the findings of this investigation very seriously and will work together with each of these facilities to help get them into compliance as quickly as possible.”

According to the agency, the clinics were scheduled to be inspected “later this fall,” but Gov. Nikki Haley, R-S.C., requested an investigation following the release of a series of undercover videos depicting Planned Parenthood executives describing the harvesting of fetal organs at the organization’s affiliates.

Spokespersons for Planned Parenthood have denied that they profit from their tissue donation program.

In a statement, the agency said it issued an Administrative Order of Suspension for a Planned Parenthood clinic in Columbia due to 21 cited violations of state laws and regulations including:

According to DHEC, the two clinics have until Sept. 28 to correct the violations or face closure.

A third clinic, the Charleston Women’s Medical Center, was cited for four “minor” violations, which DHEC characterized as “documentation errors.” The clinic must submit a plan of correction to the agency.

“Our health center was inspected less than a year ago and was found to have 100 percent compliance with all state regulations,” Black said. “The reported administrative and operational issues do not rise to the level of shutting down health centers. We are reviewing all of the issues that were raised in these inspections and will of course comply with all state requests. We are deeply concerned that this investigation is politically motivated and that this political interference could prevent some women from getting high-quality care.”