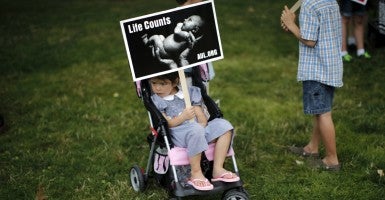 Over the last several months, video evidence has documented that the nation’s largest abortion provider, Planned Parenthood, may have been selling baby parts for profit.  The evidence also suggests they may be harvesting organs from babies who are still alive.

Congress now gives Planned Parenthood over $500 million from federal taxpayers every year, but a growing number of Americans oppose taxpayer funding for abortion and the sale of tissue and organs from aborted babies.

The editors of The Wall Street Journal, reflecting the cowering position of the Republican Washington establishment, recently wrote an editorial pre-emptively waving the white flag on the growing movement to stop taxpayer funding of Planned Parenthood.  And they harshly criticized all those who would try to stop the funding of these barbaric practices.

The Journal’s editors acknowledged the horror of Planned Parenthood’s activities and the necessity to eventually remove taxpayer funding from them—and for that I commend them. But they’ve fallen into the same old rhetoric as the crustiest party establishmentarians:

They’ve also adopted the meme of the Republican leadership and all of the establishment media, which goes something like this: Republicans must give President Obama everything he wants or the president will shut down the government and blame it on Republicans; then Republicans will lose the next election.

It’s true that if the president and his allies in Congress refuse to fund the government without taxpayer funding for Planned Parenthood, the government might experience a shut down (“slow down” is a more accurate description).  We’re told this must be avoided at all costs, because this fight will distract from the real priorities of the GOP.

Most damaging of all is the assumption that it’s never the right time to follow through on your principles—even when the other side is literally in the infanticide business.

We are also told that public opinion polls will go against Republicans. In a nonsensical twist, the Journal notes that the Obamacare shutdown in 2013 was followed by a massive GOP victory in 2014 because of public dissatisfaction with Obamacare, yet the editors cite the shutdown fight as a bad thing. They fail to see that the American people were smart enough to connect the dots, and supported the candidates who tried to prevent the Obamacare disaster.

Conservatives sticking to their guns may well have won the Senate and given the GOP its largest House majority in decades. It’s long past time that Republicans make good on their campaign promises.

Americans are sick of politicians who tailor their convictions to opinion polls, rather than standing up for what is right and good for the country. We are all sick of politicians who never follow through on their campaign promises because they are obsessed with future elections and the hypothetical political costs of doing the right thing.

But if politicians in Washington need poll numbers to muster up a sense of decency, here are some to consider: The Heritage Foundation’s American Perceptions Initiative found that 78 percent of American polled agree with the statement “Government should not be in the business of funding organizations that harvest and sell baby parts from aborted children,” and 72 percent agree that “taxpayer dollars would be better spent directed to the more than 13,000 health centers and hospitals providing comprehensive women’s health care.”

The editors of The Wall Street Journal also mention the potential of an endless filibuster as a fait accompli if Republicans stand with the majority of Americans against tax dollars to Planned Parenthood. What they forget is that filibusters of this sort almost never happen, because neither party can be bothered to stay awake in Washington that long. But what if they did?

Let the Left filibuster. Make them talk for days without rest about how important the sale of baby parts is to women’s health. The more these lies are told, the more often we have the chance to expose them.  If liberals are so enamored with selling baby parts, force them to defend the practice for hours on the Senate floor.

And then, do something the GOP failed to do the last time Obama shut down the government: tell the American people exactly who made the decision to shut it down. Hint: it’s not the people eliminating taxpayer funding of abortion. Americans have enough sense to understand that if Republicans provide funding for all the other functions of government, but eliminate over $500 million of funding to a private organization that sells baby parts, Republicans are not responsible for a government shutdown. If Obama decides to shut down the government to protect this barbaric practice, Republicans should force him to defend his indefensible position.

The assumption that conservatives would automatically take the blame for a shutdown concedes the public debate before it even starts. Most damaging of all is the assumption that it’s never the right time to follow through on your principles—even when the other side is literally in the infanticide business.  That is cowardice.

The fight to end taxpayer funding of Planned Parenthood will be just that: a fight. And like all the struggles to return sanity and respect for human life and decency to our government, it will be a tough one.  But conservatives should fight to win, not plan to fail.