America’s Suffering From a Crisis of Confidence 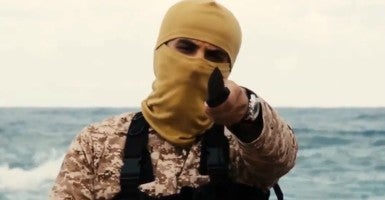 Earlier this year, ISIS released a video claiming to have killed 21 Egyptian Christians who were captured in Libya. (Photo: News Pictures / Polaris/Newscom)

Syria’s raging civil war has transfixed the West’s collective consciousness two summers in a row: last summer with ISIS’s unspeakable barbarity and in 2015 by unleashing a refugee crisis on Europe. Those searching for solutions would do well to take a comprehensive approach.

Yes, better military options are needed in the Middle East. But in the current struggle with Islamism and other ideologies bent on destroying Western principles, we are facing something much more acute: a crisis of confidence.

This crisis of confidence is as pervasive as it unnoticed. We have even come to see the Information Age—fueled by American technological innovation—as a subversive threat, because it helps recruitment, rather than as a facilitator of many of our cherished freedoms.

This is the considered view of a British visitor who came to Washington last week to warn America (and the entire West) not to take its eye off the ideological fight for values. That he was not too long ago in charge of the defense portfolio for British Prime Minister David Cameron is not the only reason to listen to Liam Fox. It’s also the strength of his argument that commands respect.

Speaking at The Heritage Foundation, Fox warned that the struggle against ISIS “is not simply a battle to be fought on the ground against a military force. This is an ideological battle. We need to understand the scale of the challenge we face.”

Undergirding this informational infrastructure was a moral confidence about the superiority of our system. Though not every American or Western leader liked it, in 1983 President Reagan called the Soviet Union an “Evil Empire.” Four years later, in a speech before Berlin’s Brandenburg Gate, and in the teeth of opposition from the State Department, Reagan called on Soviet leader Mikhail Gorbachev to “tear down this wall!”

Fox, who is still a member of the British Parliament, noted that back then the West understood that we had to utilize not just our military capability against the Soviet Union, “but our moral case for our own superiority.” Today we have lost that confidence.

Fox recalled that at a meeting in the Élysée Palace in Paris, the seat of the French presidency, he recently asked, “Why was it that in the Cold War we were willing to use the word ‘better,’ that capitalism was ‘better’; that freedom was ‘better’; that democracy was ‘better’ than the alternatives, but nowadays we don’t? I happen to believe that religious tolerance is better than enforced orthodoxy, that treating women as equal citizens is better than treating them as second-class. I believe that the values that we hold are better than the alternatives that are put forward by the Islamists.”

But when he made this argument, Fox said his French hosts replied, “I don’t think that today we can say ‘better.’ Just ‘different.’”

This is a problem the West needs to solve, says Fox: “If we only believe that what we stand for is different to the alternatives, and not better than the alternatives, we ourselves will not have the moral courage to do what we believe is right and we will not have the moral authority internationally to do so. It is time in the West that we stopped using ‘different’ and started using ‘better.’”

If the West regains its collective confidence, he said, it can once again wage an information war. “It’s time that we started seeing the information revolution not as threat to our security, but as an opportunity for us to propagate those values that have made us what we are.”

“It’s time,” Fox went on, “to get back into the values argument, and that values argument is just as important in the long term in defeating ISIS or Al-Shabaab or whatever the subsequent threat might be as the all too easy military response. This is a something that requires a fight by our whole society and not just our military.”

This is an argument likely to fall on deaf ears in a White House whose present occupant began his first term by making clear that such a quaint notion as “American exceptionalism” is passé. But it’s an argument worth repeating, especially as candidates of both parties offer their ideas about how to fix the world.