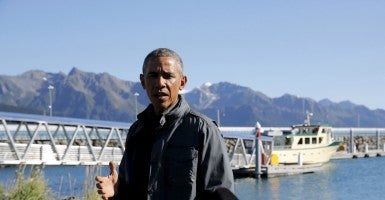 Recently, President Obama visited Alaska to scare up support for his climate agenda. But it’s becoming clear that this agenda is not, in fact, about climate. Instead, it’s the typical Washington story of power and money—other people’s money.

Alaska provided the apparent novelty of ice that melts in the summer, which was used as a theatrical prop for the president. His photo op in front of the retreating Exit Glacier glossed over another bit of reality: The Exit Glacier started retreating more than 100 years before the start of significant man-made carbon dioxide emissions.

In a bit of bonus irony, the climate research center at the University of Alaska shows that there has been no warming trend in Alaska since 1977. In fact, the trend is slightly negative.

All this misdirection is for promoting an agenda whose most prominent part is the Clean Power Plan (CPP). The agenda and the CPP are based on three bits of, shall we say, fraudiness.

To be sure, there is carbon pollution, but it is not carbon dioxide. The common name for carbon pollution is “soot,” and there have been regulatory limits on soot for decades. Due to these limits and the general improvement in technology, a modern coal-fired power plant cuts soot emissions by more than 99 percent compared to plants without the new technology. In spite of the phenomenal increase in power production since the late 1970s, total air pollution has actually declined significantly.

Second, virtually all extreme weather is blamed on global warming, with the inevitable prediction of worse to come. However, data from NOAA and the Intergovernmental Panel on Climate Change contradict this fear-mongering. They show no trend in hurricanes, tornadoes, droughts, or floods.

The third bit is that the CPP is a climate policy. Using the EPA’s own climate model, climatologists at the Cato Institute calculated the impact of the CPP on world temperature. The result? By the end of this century, the CPP’s maximum impact would reduce world temperature by 0.019 degrees—well within the margin of error. The projected impact on sea-level rise is equally ridiculous—just 0.01 inches by 2100.

The CPP’s climate benefit may be negligible and distant, but the CPP’s economic cost will be large and immediate. According to the Energy Information Administration (EIA), in the decade of the 2020s, lost GDP will total $1 trillion, and total employment will fall by as much as 500,000 jobs.

While our country’s economic pie shrinks, it will be recut in ways that bring great wealth to some. The tools of carbon policy—taxes, mandates, government loans, subsidies, cap and trade, etc.—divert the flow of wealth toward those with the necessary political power.

Case in point: On Aug. 24, the Department of Energy made two notable, but mostly unnoticed, announcements. First, the inspector general issued a report revealing that the then soon-to-be-bankrupt solar panel producer Solyndra’s politically well-connected proprietors misled the DOE while procuring their $500-million government loan. The loan was never repaid. Further, the inspector general noted that the DOE’s due diligence was “less than fully effective.”

The other DOE announcement was not about a plan to prosecute those who misled them and stiffed the taxpayers for a half billion. No, instead, DOE announced they were restocking their loan fund with another billion dollars to support government loans for (drum roll)…solar panels.

The DOE loan program funds those who can’t succeed on their own, and many others who have more than enough money to finance their own projects. In addition to the Solyndra losses, taxpayers lost millions more with bad loans to Beacon Power, Abound Solar, Nevada Geothermal, etc.

Perhaps even more galling is the billions in government-subsidized loans made to projects owned by the likes of Goldman Sachs ($90 million), Exelon ($646 million), BP, and Chevron ($3.8 billion), hardly the most needy companies in America.

The CPP is just another plan to grab power and money—your money.

Originally published in The Bradenton Herald.