We Remember: 22 Photos of September 11 and the Days After 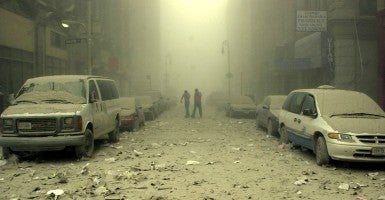 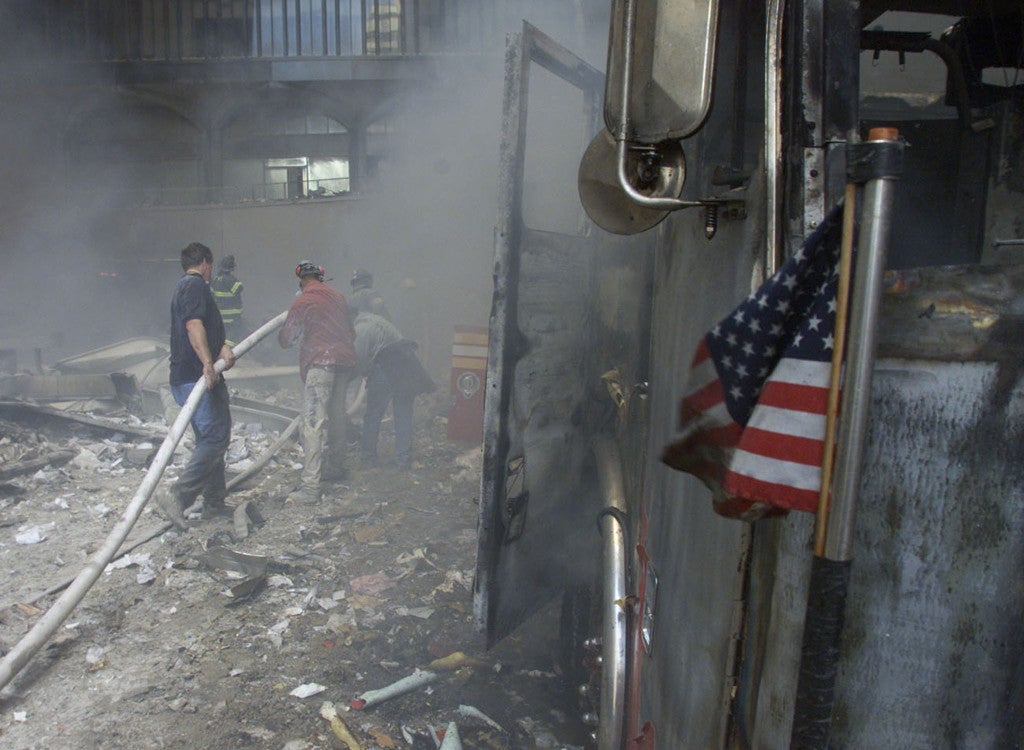 A U.S. flag flies from a burned firetruck near the wreckage. (Photo: Reuters/Peter Morgan/Newscom) 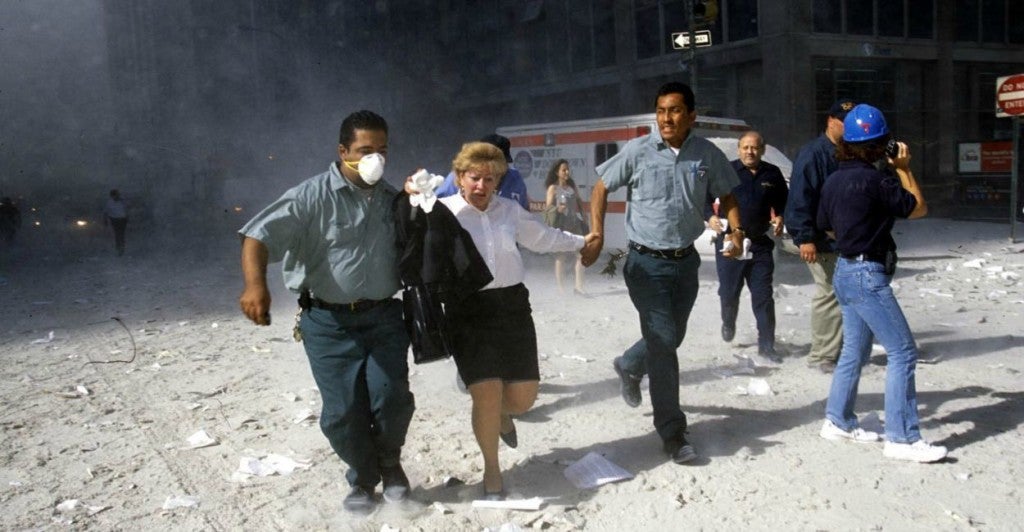 Evacuees walk through the streets in a daze. Those that escaped the attack frightened, only covered in ash while others emerged bloodied and wounded. (Photo: Black Star/Lisa Quinones/Newscom) 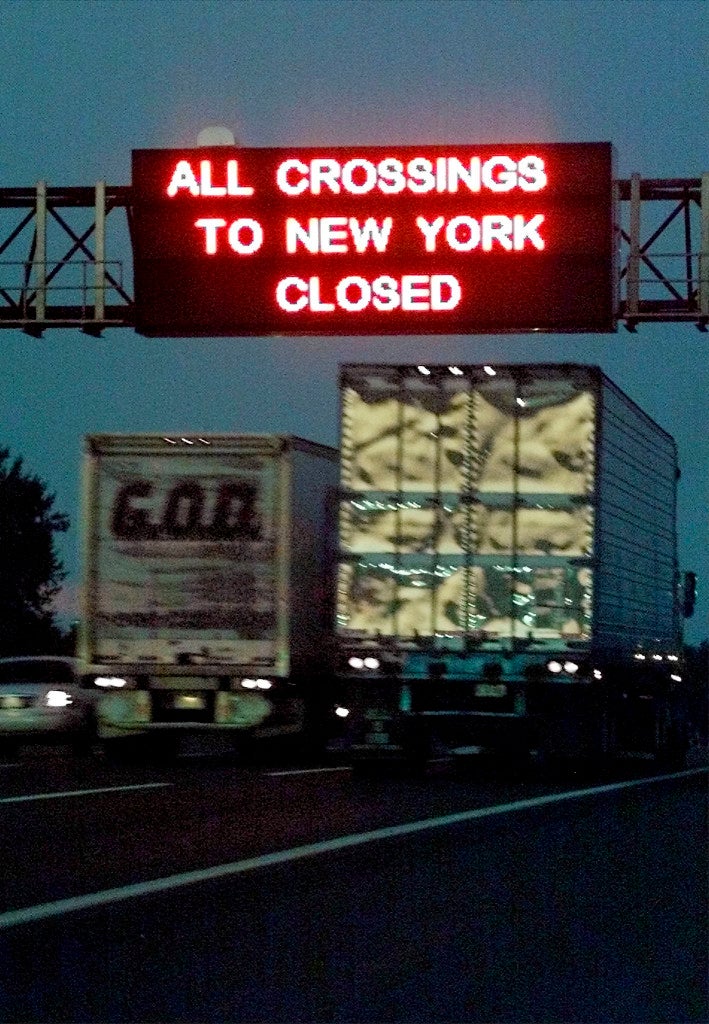 A sign over the New Jersey Turnpike in New Brunswick, N.J. warns travelers that all bridge and tunnel crossings into New York City have been closed off. (Photo:REUTERS/Jim Bourg/Newscom 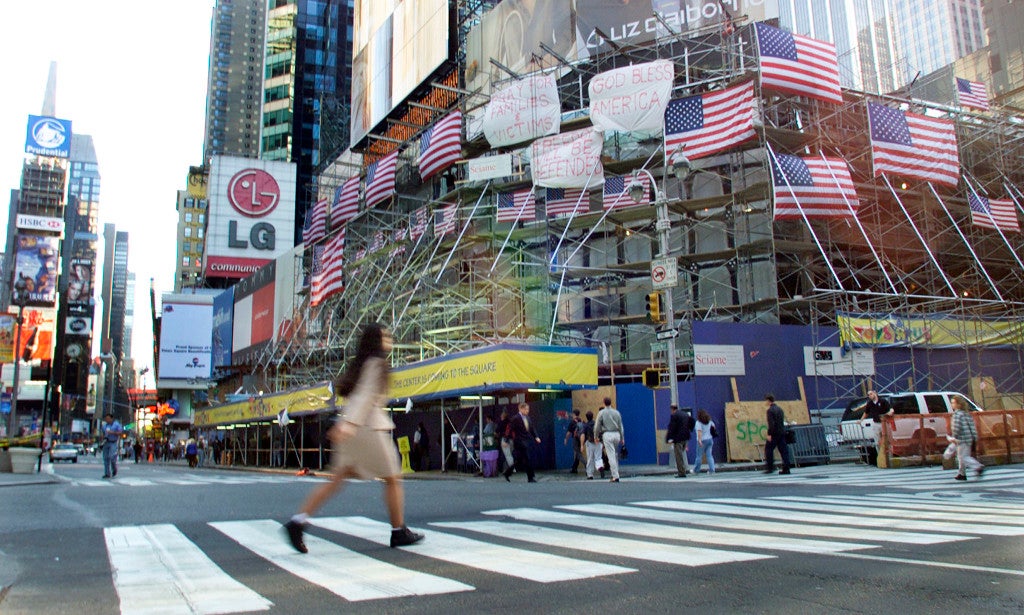 The streets in Times Square during the normal morning rush hour are quiet as the city slowly attempts to return to normal, September 13, 2001. (Photo: Reuters/Gary Hershorn/Newscom) 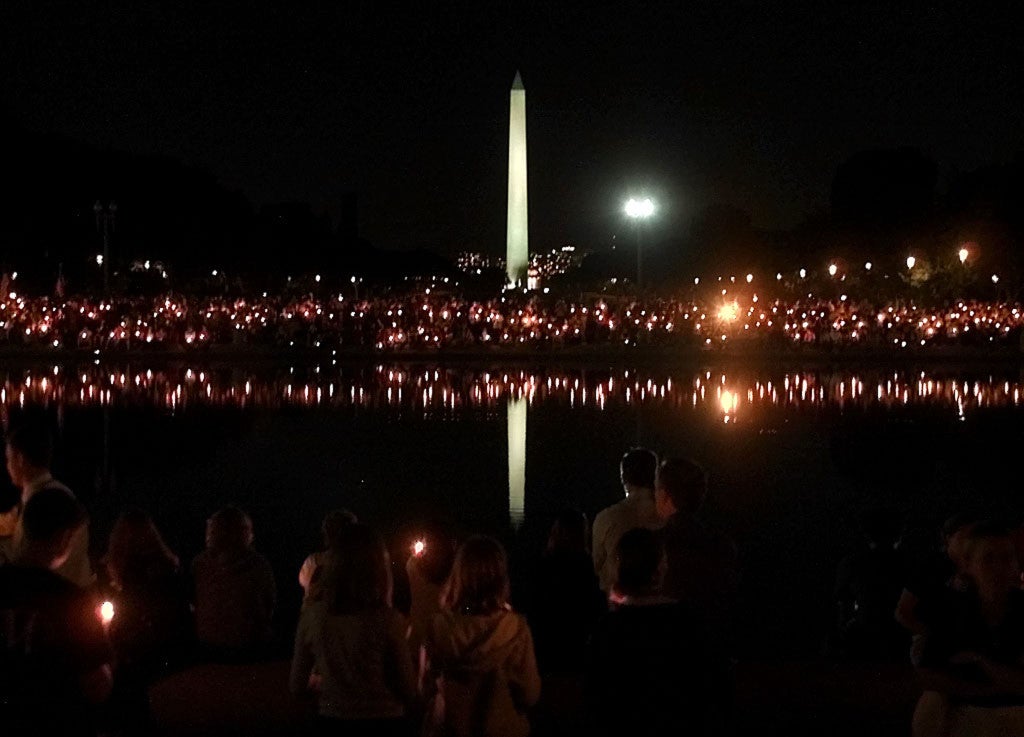 Thousands of people take part in a candlelight vigil on the National Mall in Washington D.C. September 12, 2001. (Photo: Reuters/Win McNamee/Newscom) 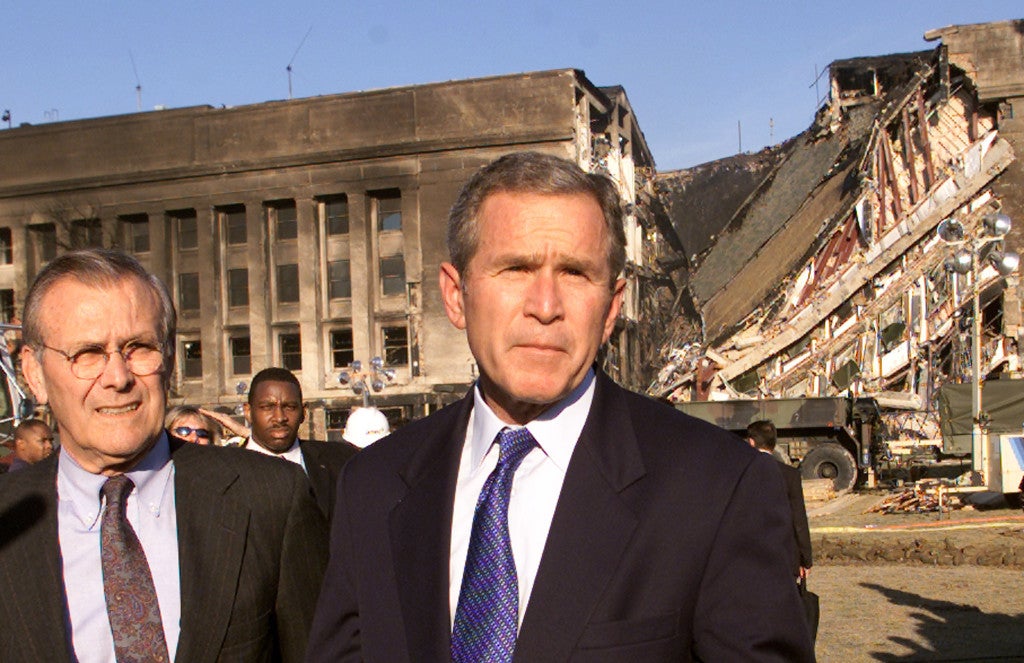 Secretary of Defense Donald Rumsfeld and President George W. Bush speak in front of the west side of the Pentagon September 12, 2001 — the same spot where terrorists plunged an airliner earlier the day before. (Photo: Reuters/Kevin Lamarque/Newscom) 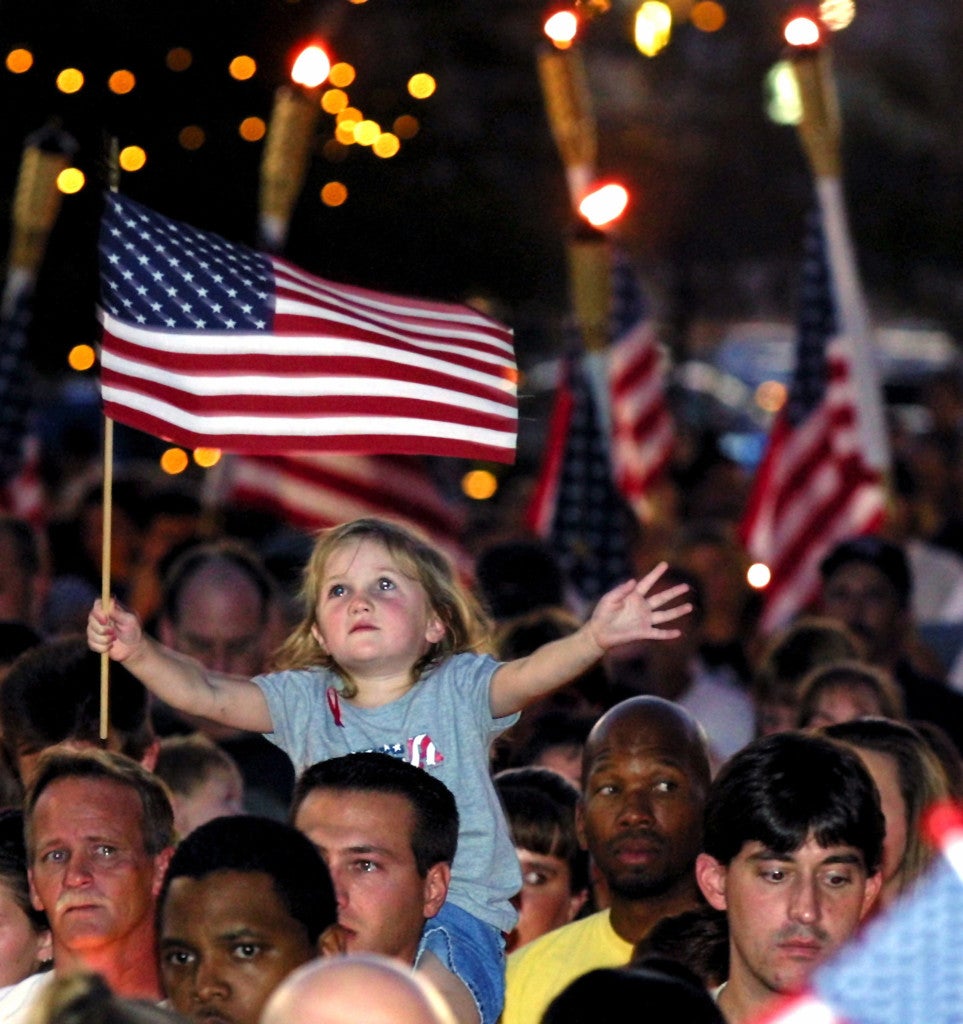 Four-year-old Alana Milawski waves an American flag as she sits on her father’s shoulders during a candlelight vigil held in Las Vegas’ Thomas & Mack Center on the campus of the University of Nevada-Las Vegas September 12, 2001. (Photo: Reuters/Ethan Miller/Newscom) 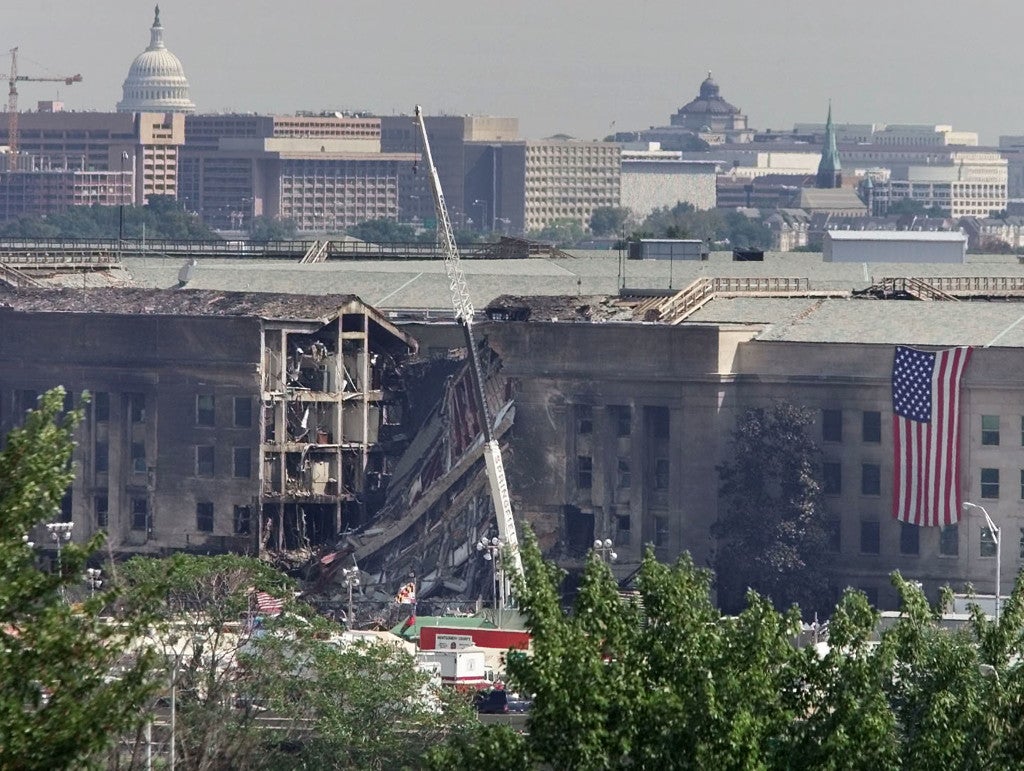 The U.S. Capitol hovers in the background over the damaged area of the Pentagon building, September 13, 2001. (Photo: Reuters/Larry Downing/ Newscom) 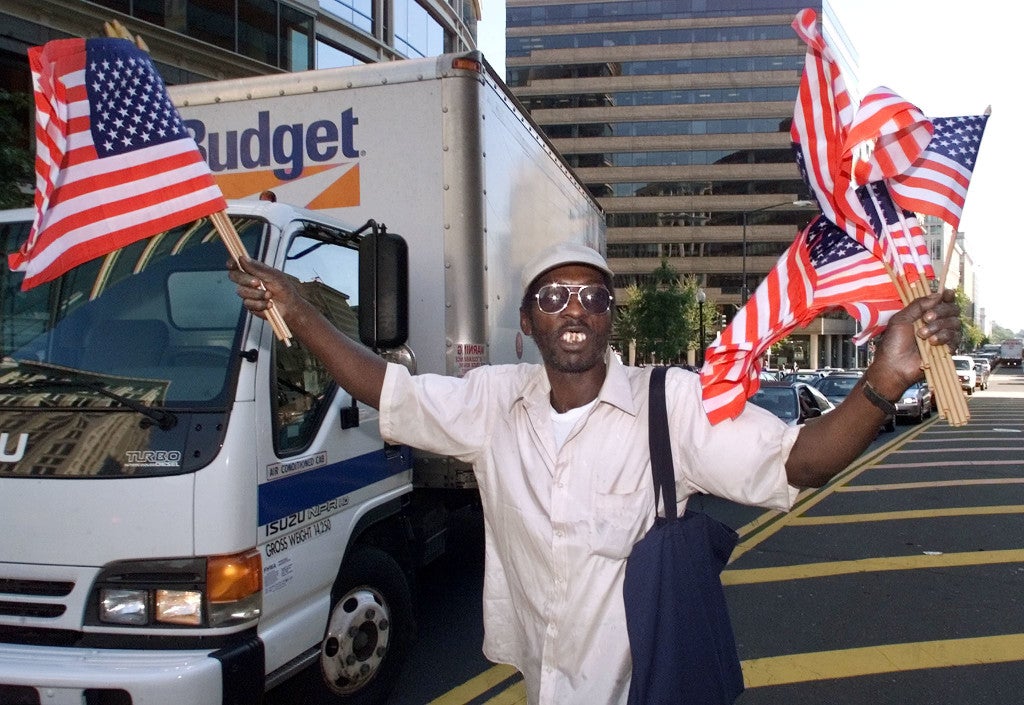 Jeremy Hodgkins hands out American flags to drivers in Washington D.C. September 13, 2001. Immediately after the attack flag sales soared in the United States — with many stores emptying their inventory. (Photo: Reuters/Win McNamee/Newscom) 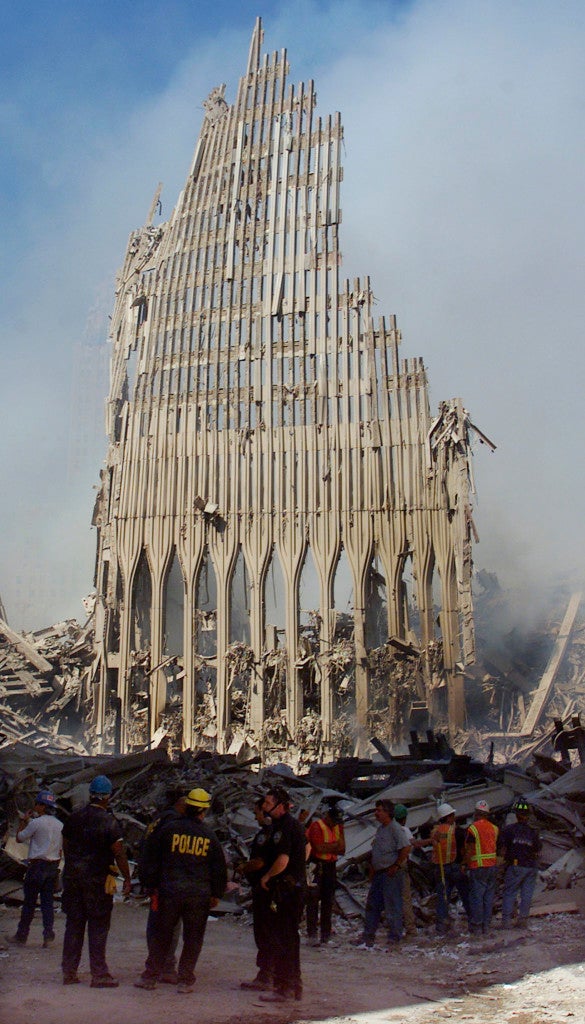 Rescue workers stand next to a piece of wall still standing from the fallen towers in New York September 13, 2001. (Photo: Reuters/Beth Kaiser/Newscom) 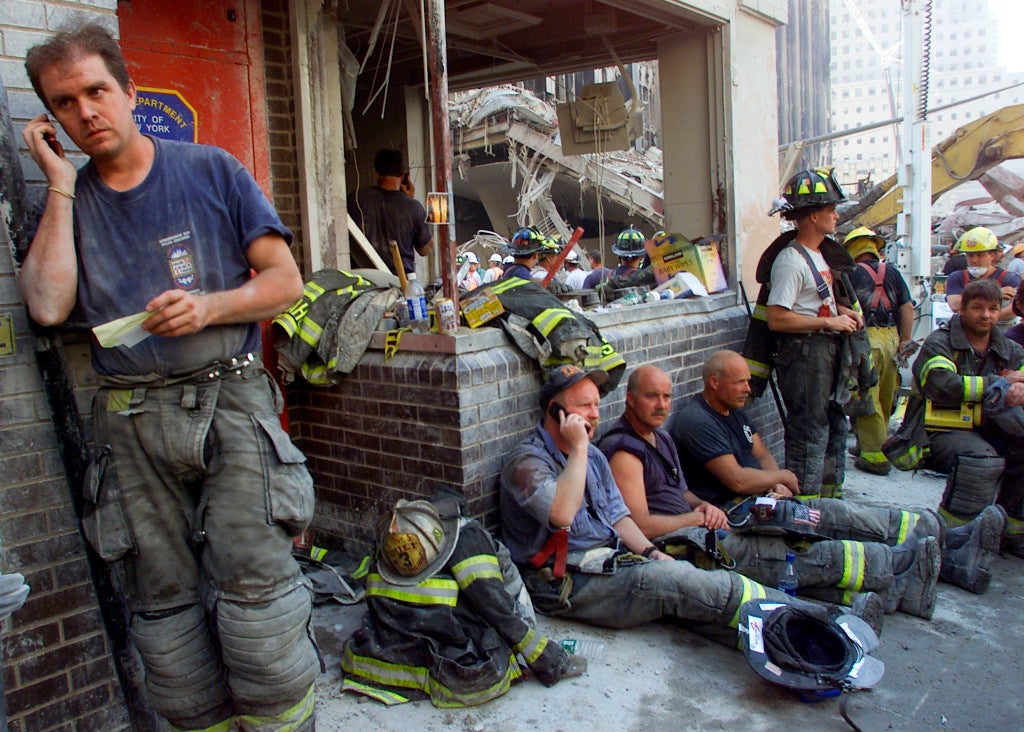 Firemen from around the nation gather at a destroyed firehouse next to the towers as they take a break from rescue efforts in New York September 13, 2001. (Photo: Reuters/Newscom) 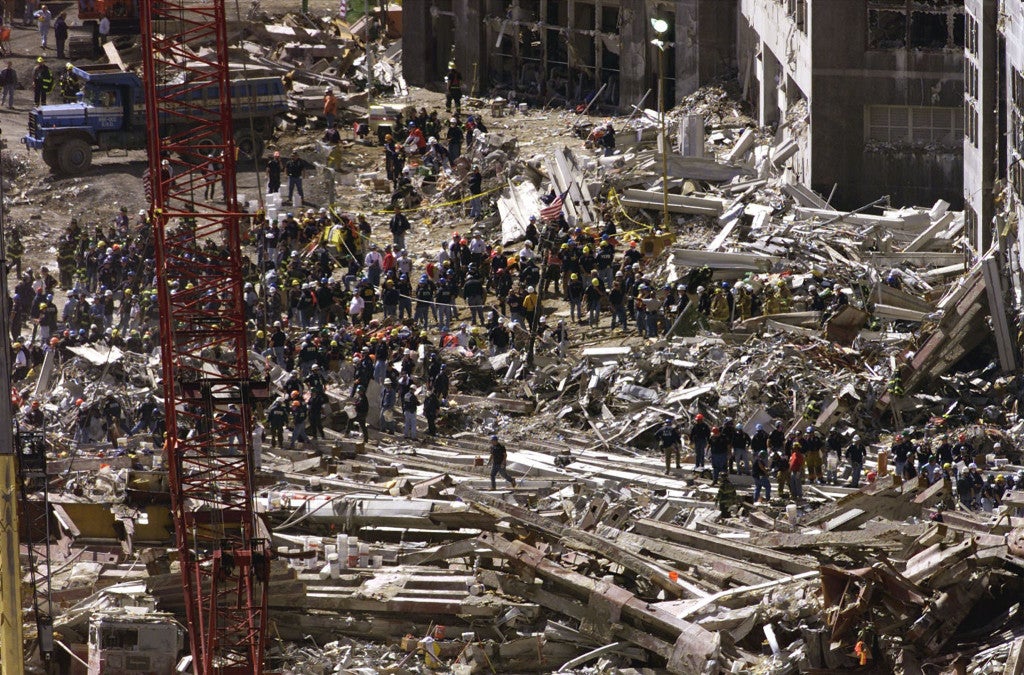 Rescue workers continue their search for survivors on the rubble of the destroyed World Trade Center in New York, September 15, 2001. (Photo: Reuters/Jeff Christensen/Newscom). 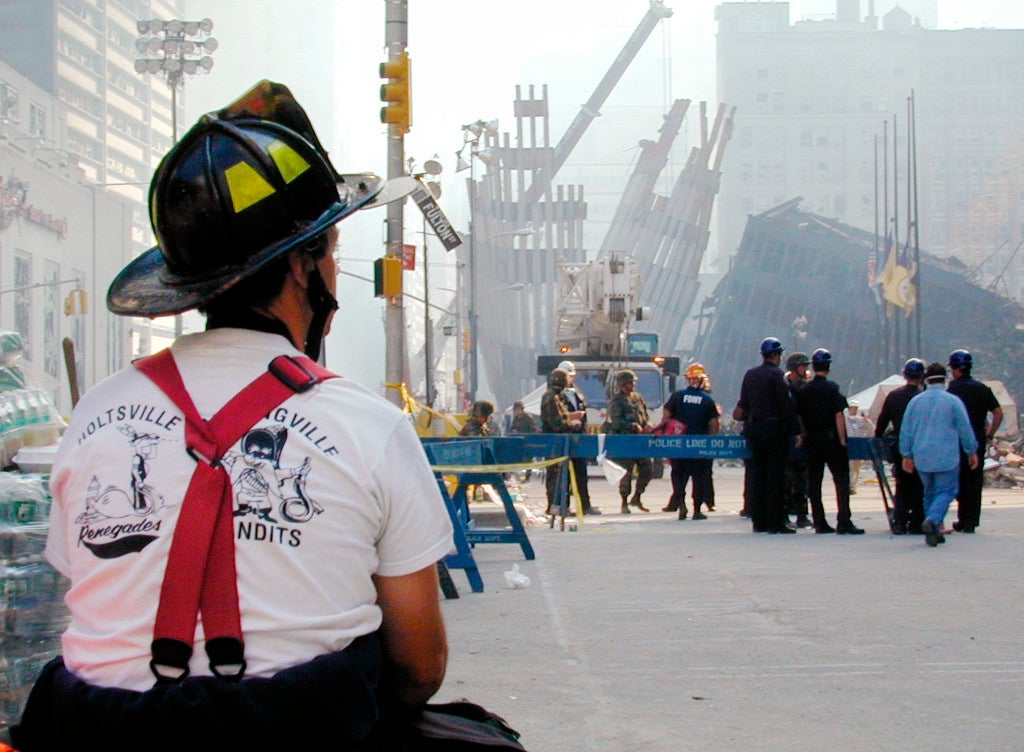 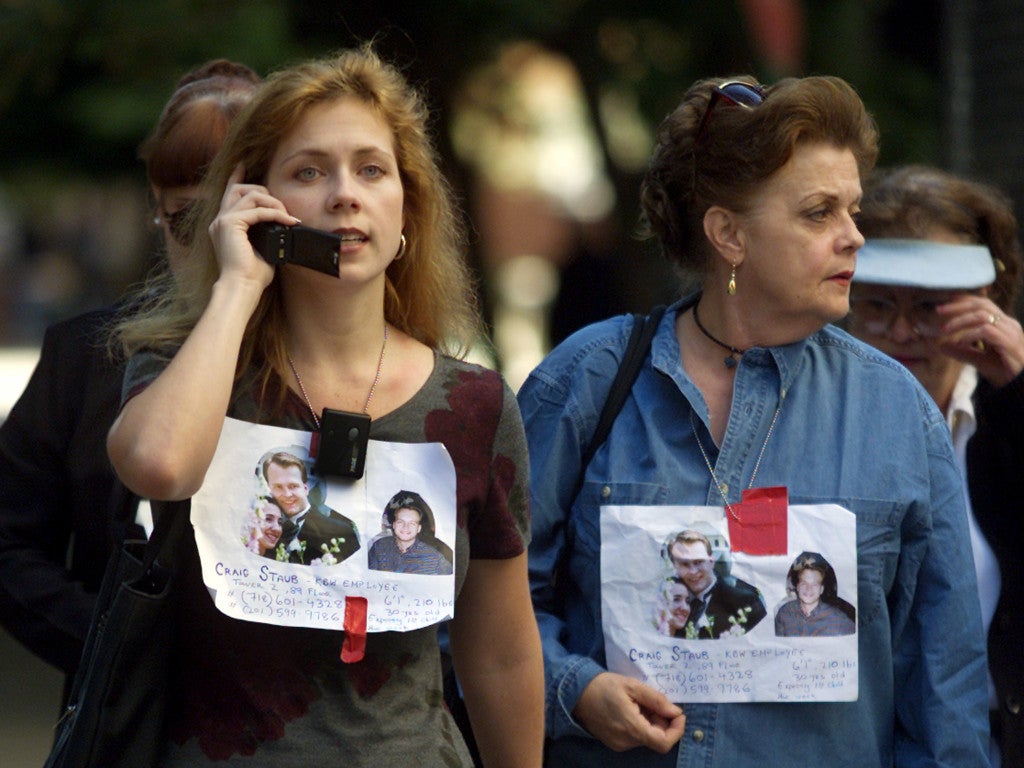 Women wear signs with pictures of missing relatives outside New York’s Bellevue Hospital as they wait for word of their fate. (Photo: Reuters/Shaun Best/Newscom) 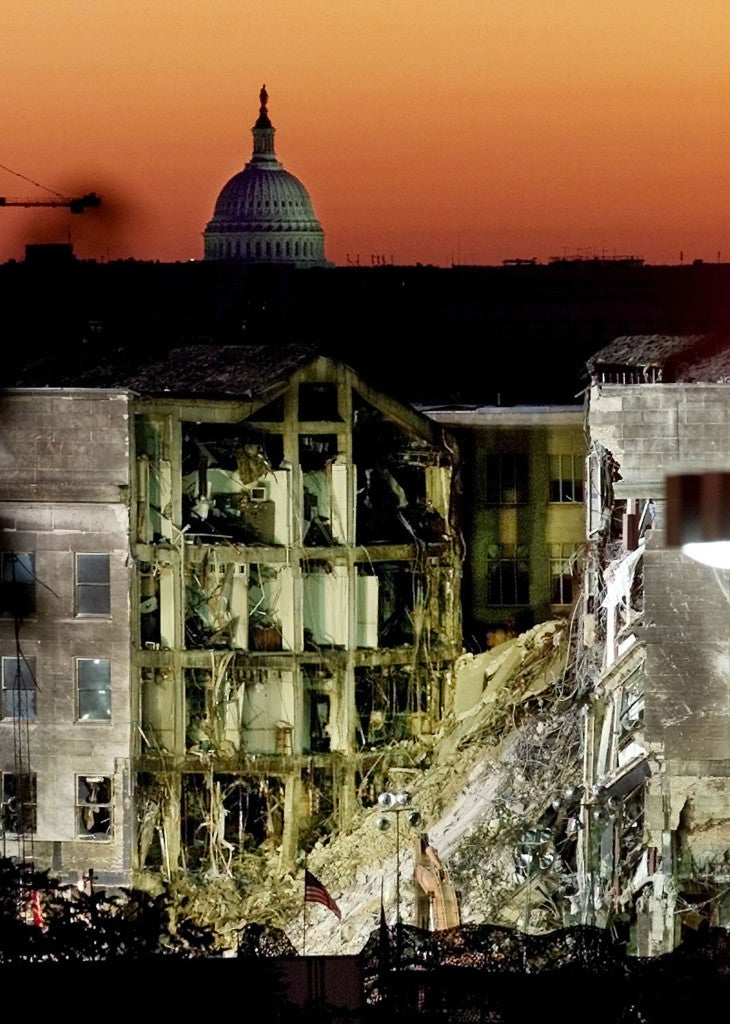 Six days after the attack on the Pentagon at sunrise, September 17, 2001. (Photo: Reuters/Larry Downing/Newscom) 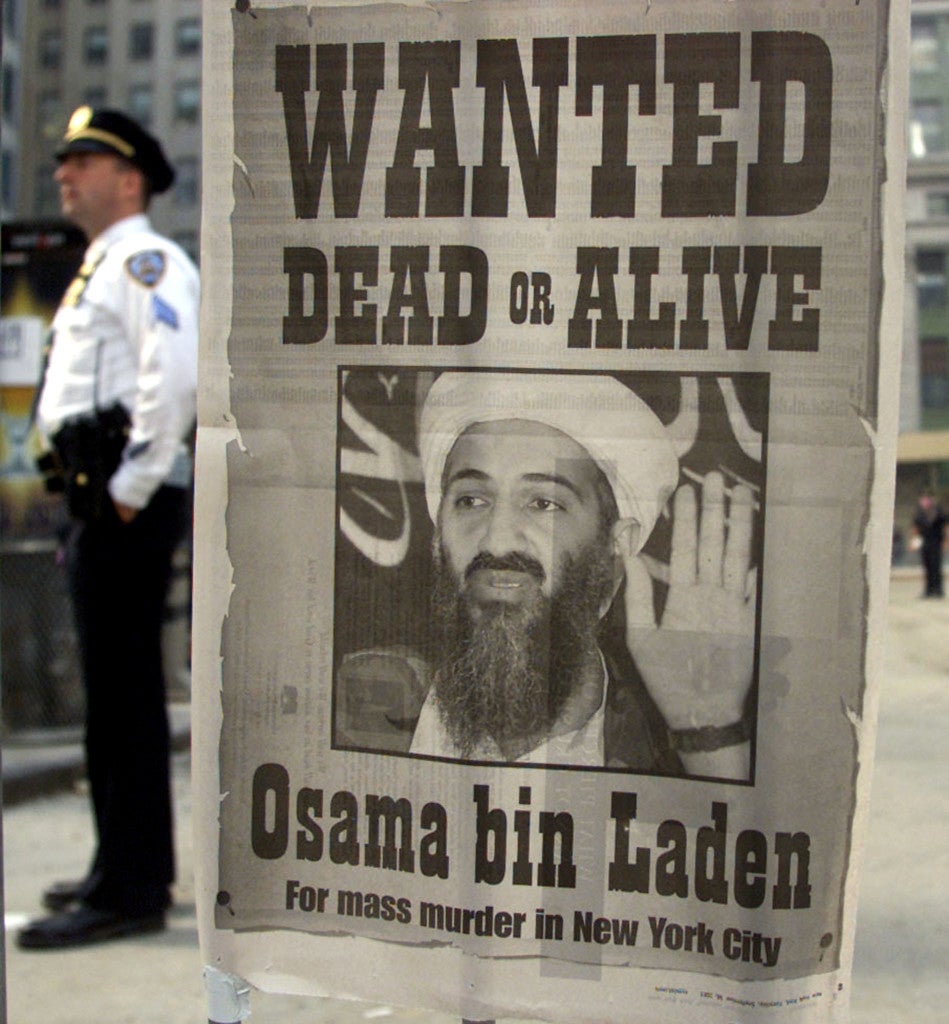 A police officer stands near a ‘Wanted’ poster for the Saudi-born militant Osama bin Laden in the financial district of New York, September 18, 2001. (Photo: Reuters/Russell Boyce/Newscom) 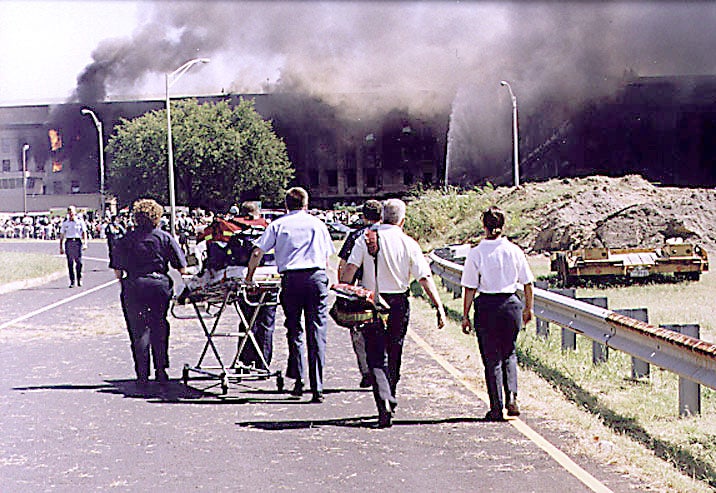 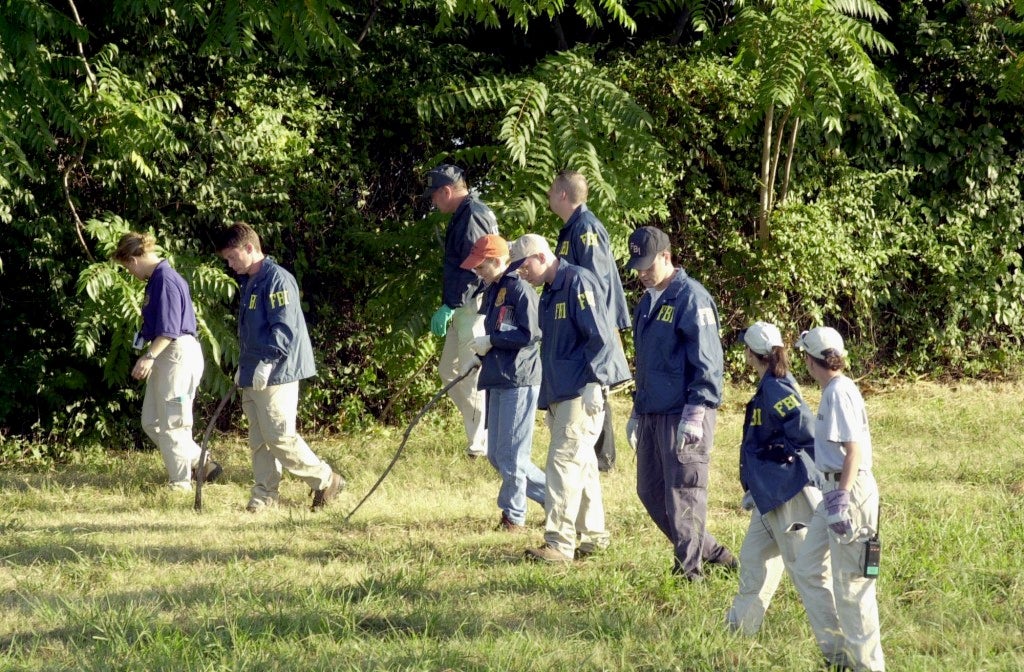 FBI agents search the grounds surrounding the Pentagon on September 12, 2001 in Arlington, Va. for any evidence related to the attack.(Photo: UPI Photo Service/Michael Kleinfeld/Newscom) 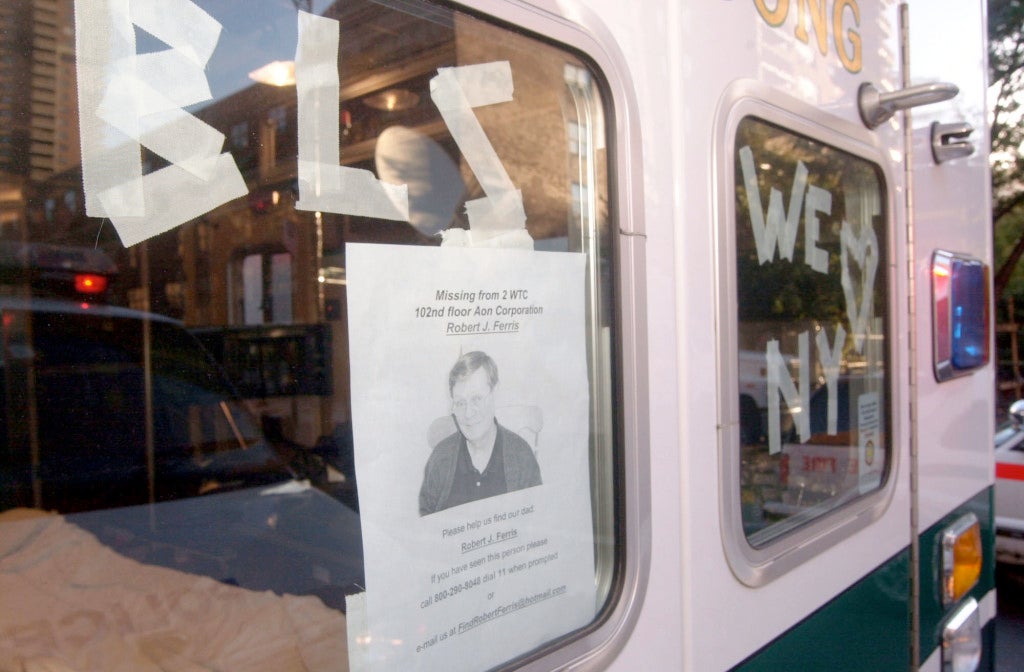 A missing person flyer is posted on the rear window of an ambulance as families all over New York City and the nation try to locate missing loved ones. (Photo: UPI Photo Service/Newscom) 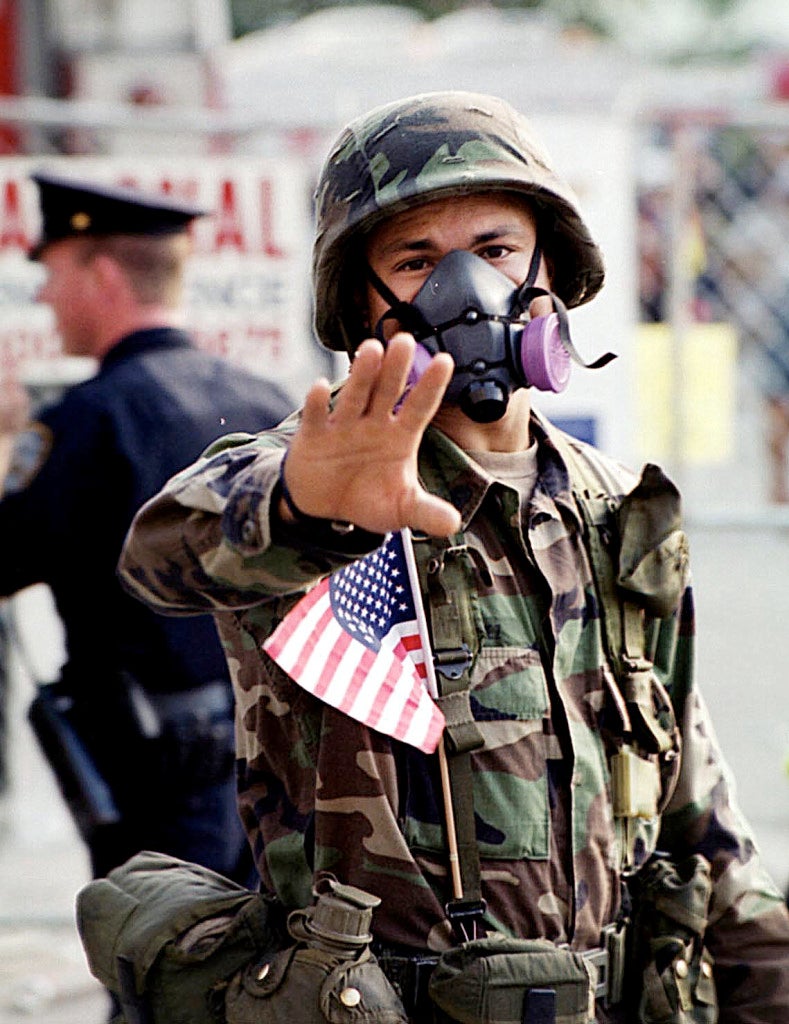 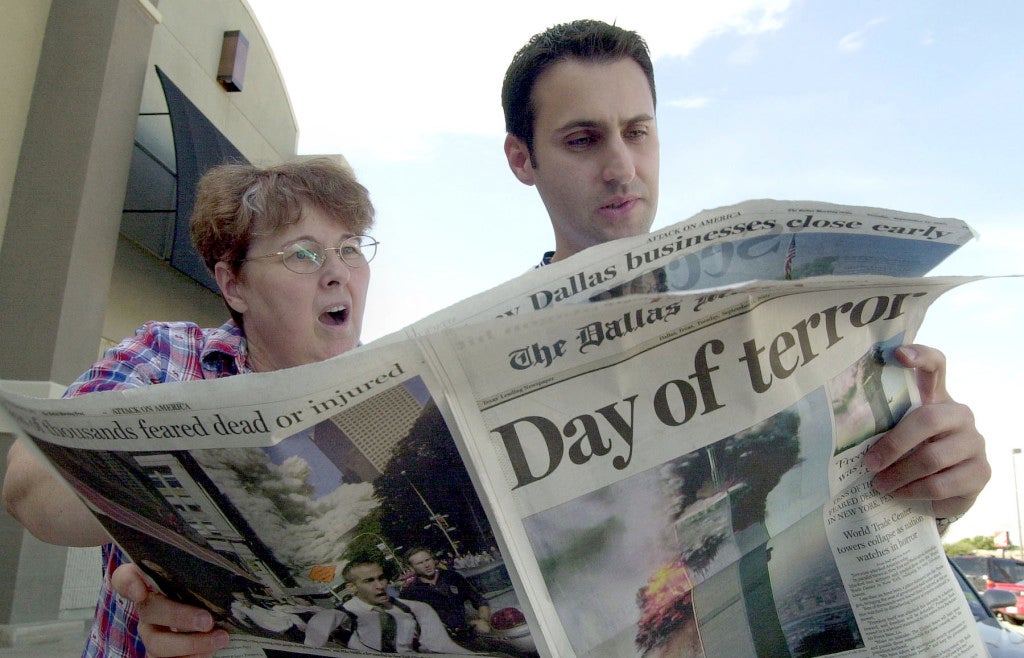