Next Obamacare Issue: The Definition of ‘Small Employer’ 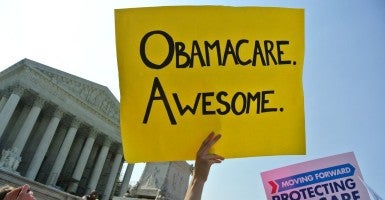 Obamacare poster on the steps of the Supreme Court. (Photo: Will O'Neill / Flickr / CC BY 2.0)

Unsurprisingly there are more problems with the Affordable Care Act (Obamacare) that await members of Congress coming back from their August recess.

While there are previous instances when Congress has exempted small employers from a requirement imposed on larger businesses, in this instance the opposite is the case.

In particular, the Affordable Care Act’s required coverage of “Essential Health Benefits” applies to individual and small group policies sold by insurers, but not to large group policies or to self-insured employer plans (of any size). Consequently, the impending change in the definition of small employer from 50 to 100 workers means that Obamacare’s costly benefit mandates will soon be extended to the health plans of several million more Americans.

Of course, more people seeing their health insurance costs go up as a result of Obamacare doesn’t make for happy constituents. So, back in March seven senators (six Democrats and one Independent) sent the Secretary of Health and Human Services a letter asking her to postpone this definitional change for two years arguing,

“…we believe expanding the definition will force those historically defined ‘large group plans’ into the ‘small group market,’ where they could experience higher premiums, less flexibility, and new barriers to coverage.”

Setting aside the issue of whether the administration can legally delay implementing this provision, the senators were certainly correct about its harmful effects.

As we explained previously, tens of millions of Americans have already seen premiums for their individual or small group coverage driven up by Obamacare’s costly insurance benefit mandates.

There are now bipartisan bills—in both the Senate (with 28 cosponsors) and the House (with 207 cosponsors)—to undo Obamacare’s definitional change, and the House Energy and Commerce Committee just held a hearing on the House bill.

Yet, while it is gratifying to see bipartisan support for preventing further damage from Obamacare, why isn’t Congress also providing relief to those who have already been harmed?

If workers in companies with 50 to 100 employees should not be subjected to Obamacare’s benefit mandates because doing so would result in “higher premiums, less flexibility, and new barriers to coverage,” then on what grounds is it acceptable for Congress to continue subjecting people with individual and small group plans to the same adverse effects?

The fairer solution would be for Congress to ditch Obamacare’s costly benefit mandates entirely.