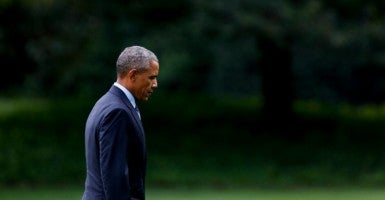 “[F]or every young person willing to work hard, I want two years of community college to be as free and universal as high school is today,” President Obama announced Wednesday in a speech at Macomb Community College in Warren, Mich. The president’s remarks came as part of a renewed effort to garner support for his America’s College Promise initiative, which would include $60 billion in new federal spending over 10 years to make community college “free” for students who maintain a 2.5 GPA.

Yet low-income students already have access to federal Pell Grants, which can be used to finance their tuition obligations at a community college.

Indeed, the number of Pell recipients has doubled since 2008. So the proposal will serve as little more than a federal handout to the community college system. And it goes without saying that the initiative isn’t actually free. Someone has to pay that $60 billion price tag, and that someone is American taxpayers.

Community college is already a cost-efficient means of accessing some higher education. Throwing $60 billion in federal subsidies to the two-year colleges, however, will likely encourage those schools to become less cautious about spending, and poorer stewards of public funds.

Obama’s remarks mirrored those he made during a similar pitch at the same community college in Macomb back in 2009.

Existing federal and state subsidies, however, are already robust. According to the College Board, 31 percent of federal Pell Grant funding goes to students enrolled in community colleges.

Although average tuition and fees at community colleges across the country are around $2,700, students receive $1,700 on average in aid – primarily constituted of federal Pell Grants – to defray those costs.

Although the community college system has been a worthwhile pathway for many students to jumpstart their careers or obtain the skills and credentials they need, the schools’ structure are not working out for many more. Just 20 percent of students who begin community college each year complete their program within 150 percent of the standard time, according to the U.S. Department of Education. In other words, just 20 percent of students complete their studies within three years. And, as the Cato Institute’s Neal McCluskey found:

More than one-third of students have to take remedial courses when they enter college, as they leave high school unprepared for university-level work. Free community college would put even less pressure on high schools to produce graduates who are prepared for college-level work, as they could expect the new free community colleges to fill in what the high schools are failing to do. The proposal is more likely to produce a six-year high school system than a two-year gratis workforce preparation experience.

Does it make sense? Once again, the administration is pursuing initiatives to subsidize rising costs, instead of working with Congress on policies that actually would address the driver of college cost increases: the open spigot of federal student aid. Over the past several decades, college costs have risen at more than twice the rate of inflation, thanks in large part to federal subsidies.

Higher education in the United States has a long and celebrated history, pre-dating federal spending and the numerous programs and requirements that exist today. More federal spending and intervention will not serve students or taxpayers well, and will ultimately drive up costs for both.