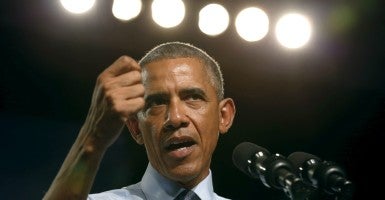 President Obama has been reluctant to engage too deeply in the Syria conflict.(Kevin Lamarque/Reuters/Newscom)

In a last ditch strategy to show its authority, House conservatives have pushed party leaders to delay a vote on the Iran nuclear deal because they believe President Obama has deceived Congress on components of the agreement.

Though Obama has secured enough support to veto an attempt by lawmakers to reject the accord, it was expected that the House would vote quickly this week on a resolution to disapprove the deal.

If opponents can’t stop the deal, the thought went, then by soundly rejecting it, lawmakers could put Obama in the tough position of overruling widespread dissent of his historical pact, which is opposed by the majority of Congress and the American public.

But now, House Republicans are taking their revolt to another level by refusing to vote on the agreement unless the Obama administration provides details of side deals involving international nuclear inspectors.

“The agreement submitted by the Obama administration to Congress is incomplete,” said Rep. Mike Pompeo, R-Kan., who spoke at The Heritage Foundation Wednesday about the new strategy, which he helped author.

“There are side deals: they are secret, they are important and they exist. Show us what’s in the deal,” Pompeo added. Rep. Mike Pompeo, R-Kan., is leading a new plan to delay a vote on the Iran nuclear agreement until the Obama administration reveals “side deals” made with international inspectors. (Photo: Bill Clark/CQ Roll Call/Newscom)

One of the “side agreements” that Pompeo refers to is an agreement between Iran and the International Atomic Energy Agency (IAEA) that describes how questions about the past military dimensions of Iran’s nuclear program will be resolved and verified.

The new plan, first reported by Politico and confirmed by The Daily Signal, calls for unveiling legislation in three separate components.

House lawmakers would vote on a measure alleging Obama did not submit to Congress all of the elements of the Iran deal.

The House would also vote on a bill that would attempt to prevent Obama from lifting congressionally imposed sanctions on Iran.

And finally, lawmakers would vote on a resolution to approve the deal — rather than disapprove of it.

That vote would fail, and is meant to pressure Democrats who have reluctantly announced they will not vote to reject the deal to come out in a stronger way and approve it.

The complex effort is likely to have little practical impact. Senate Majority Leader Mitch McConnell, R-Ky., said he does not support delaying a vote of disapproval, and Obama has already won enough support of Democratic senators to sustain his veto.

Under the law that allows Congress to review the Iran deal, lawmakers have until the end of the day Sept. 17 to weigh in on the agreement.

The administration says it will move forward with implementing the deal at that time, even if Congress hasn’t voted on it by then.

Eric Shultz, a White House spokesman, mocked the House’s effort, calling it a “plan hatched up at Tortilla Coast on a Tuesday night.”

The Associated Press reported last month that the agreement by the IAEA — which is the United Nations nuclear watchdog —  will allow Iran to use its own experts to inspect a site allegedly used to develop nuclear arms.

The Obama administration has defended this practice, saying IAEA officials will participate in at least some level of inspecting the Parchin nuclear site, and that the agency is following normal protocol used in previous inspections agreements.

The administration has argued the IAEA agreement is separate from the nuclear deal agreed to by the United States and five other world powers. That deal focuses on Iran’s future nuclear actions.

Some opponents of the nuclear deal don’t buy that argument, and their anger has prompted House leadership to consider a new plan.

“John Kerry knew if the IAEA negotiated that deal, Mike Pompeo wouldn’t see it, Congress wouldn’t see it, the American people wouldn’t see it,” Pompeo said. “We need to be happy warriors. There are paths forward. Congress’ task is to use the tools we are given to stop this terror regime around the world.”

Even if this is just a process argument, conservatives argue the consequences matter.

“The way we go about doing this in the House and Senate is important—the message in the media right now is that the president won,” said Rep. Raul Labrador, R-Idaho, of the conservative House Freedom Caucus. “We were given the Senate for a reason — to stand up to this president — and how can you not stand up at a moment when only 25 percent of the American people support the nuclear deal.”