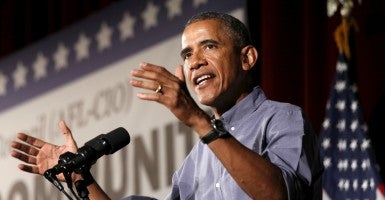 President Barack Obama signed an executive order on Monday that will give up to seven days of paid sick leave to employees of federal contractors. (Photo: Kevin Lamarque/Reuters/Newscom)

President Barack Obama took Labor Day to sign an executive order that will require federal contractors to provide employees with up to seven days of paid sick leave, condemning Republicans for a “constant attack on working Americans.”

The White House estimated that the order will impact more than 300,000 workers who currently do not receive such benefits.

“We’ve seen that many companies, including small businesses, support these policies, because they understand it’s helpful with recruitment and retention,” Obama said Monday during a union rally in Boston. “It helps you keep good employees.”

The Labor Department said the costs to companies would be offset by reduced attrition rates and greater worker loyalty, but the Associated Press noted that the administration has not provided evidence to support this.

Salim Furth, a research fellow in macroeconomics at The Heritage Foundation, called the administration’s reasoning “wishful thinking” and said the change would reduce take-home pay.

“The president is changing the way that federal contractors are compensated,” he said. “Clearly, people who have health problems will benefit. However, the rule change hurts healthy, younger workers on net.”

Furth said that because the directive impacts only federal contractors, the compensation shift could attract older, sicker workers while encouraging younger, healthier workers to leave—though he noted that the change is small enough to have only a minor impact on employees’ job decisions.

The order will go into effect as Obama leaves office in 2017.

The move comes among a series of executive actions the president has directed toward federal workers over the past year, including an order to raise the minimum wage for employees under federal contracts to $10.10.

The president also pressed Congress to pass legislation extending paid family and medical leave to private-sector workers. The White House estimates that about 40 percent of such workers do not have access to paid sick leave.

“Unfortunately, only Congress has the power to give this security to all Americans,” Obama said. “But where I can act, I will.”