The Chinese Economy Just Hit a Major Speed Bump. Why the Pentagon Cares. 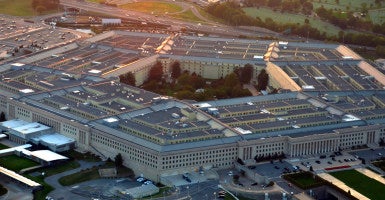 The Pentagon cares as much about how money moves around the world as it does about the movement of arms. Small wonder the recent bobbling in Beijing’s economy has caught the armed services’ attention.

After owning bragging rights to one-third of global economic growth, the Chinese economy just hit a major speed bump. Growth slowed. The market nosedived. The People’s Bank of China (PBoC) devalued the renminbi by about 4 percent, the currency’s biggest drop in two decades.

Global economic disruption that might lead to armed conflict remains a fixture on the Pentagon watch list. Since the 1997 Asian Financial Crisis sparked a round of alarms, the Pentagon has kept one eye on its gun sights and the other on global markets.

Beijing’s recent financial woes have triggered warnings that the end may be nigh for the uber-bullish dragon economy. China watcher Gordon Cheng, for one, argues that the day of reckoning might be at hand. But others caution that we should not confuse a “hard landing” for the high-flying Chinese stock market as a harbinger of a collapse of the world’s second largest economy.

A falling China would be a mixed blessing. On the one hand, it might defuse Sino-American military competition in the Asia-Pacific. On the other hand, it might not. Just because the Chinese economy retrenches, that doesn’t assure that the regime’s geo-strategic ambitions will shrink. Further, a faltering China could lead to regional instability that spawns conflicts.

While the Pentagon can ponder the prospects of an eroding Middle Kingdom, it is just as likely that the U.S. will have to learn to live with a resilient major regional power that has its share of global ambitions.

One competition the military brass will keep watching closely is China’s unrelenting effort to make the renminbi an instrument of global exchange. Beijing has long pined for “reform” of the international monetary system to expand the internationalization of the renminbi. “Such a development would jeopardize the enormous economic advantages that the U.S. has enjoyed by possessing the world’s dominant currency,” cautions Heritage Foundation economist William Wilson. “Moreover, it would signal a relative decline in American prestige and global leadership.”

Wilson, who authored a recent study of Beijing’s monetary policy, acknowledges that even without the latest stumble by Chinese markets, the renminbi has a long way to go to mount a serious challenge to the dollar. It faces enormous obstacles to securing international reserve status, much less supplanting the American dollar as a global reserve currency.

Still, China’s monetary policy bears watching, as do the underlying fundamentals of the economy—especially the services sector, which is now larger than the country’s manufacturing and construction sectors combined.

But while monitoring what the Chinese are up to, the Pentagon has to be equally concerned about the U.S. response. The U.S. military is in marginal condition. To stay ahead of China and other potential threats, the services need a boost in funding. There is, however, acceptance that growing defense spending and the public debt at the same time won’t improve America’s competitive position.

What the Pentagon ought to be hoping for is less (potentially destabilizing) bad news for Beijing, investment in the American military sufficient to keep it a viable force for peace and stability in the region, and economic policies at home and abroad that will give the Chinese economy a run for its money.

As Wilson observes: “The answer to the dollar’s potential decline is not to seek obstacles to China’s or any other nation’s economic success, but to change fiscal and monetary policies at home in order to maintain the dollar’s competitiveness.”