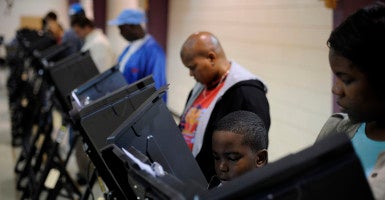 Shouldn't the focus be on only eligible voters voting? (Photo: EdStock/iStock)

The recently concluded federal trial over North Carolina’s election rules proved one thing beyond a reasonable doubt: The Obama administration and its partisan, big-money, racial-interest-group allies will stop at nothing to win elections. And using the courts to change election rules is a key part of their strategy.

That was clearly evident in the federal courtroom in Winston-Salem. The plaintiffs, including the Justice Department, challenged a number of election reforms implemented in 2013 that were designed to reduce the cost and complexity of running elections and make it harder to commit voter fraud.

The administration pushed a novel legal argument. In its telling, if a change in election rules might statistically affect blacks more than whites, it constitutes illegal discrimination. For example, if 98 percent of whites have a voter ID but only 97.5 percent of blacks have one, then requiring voters to present ID violates federal law. Never mind the fact that getting an ID is free, easy, and open to everyone without regard to race. And never mind if a policy change is in line with the rules of many other states, or if it’s explicitly sanctioned by federal law. The mere act of changing the law in the wrong direction is discriminatory.

In other words, the Obama administration would turn the Voting Rights Act into a one-way ratchet to help Democrats. The court refused to go along.

None of the reforms had an obvious racial angle. For example, North Carolina required voters to vote in the precinct where they actually live. This commonsense reform—returning to the law the state had prior to 2003—prevents chaos on Election Day, from overcrowded polling places to precincts running out of ballots because election officials can’t predict how many voters will show up. Thirty-one states do not allow voting outside of your precinct. The Justice Department claims that North Carolina broke the law when it returned to this policy.

The state also shaved a few days off early voting to cut down costs, but North Carolina’s new ten-day period falls well within the norm. The number of early-voting days allowed by states varies from just four to 45, with the average being 19. At least 16 states don’t allow early voting at all. Additionally, more than 20 early-voting states do not allow either any weekend voting or Sunday voting, both of which are available in North Carolina. And yet, according the Justice Department, this reform was also illegal.

The rule in most states is that you can register to vote if you will be 18 prior to Election Day. In 2009, North Carolina changed the law to allow 16- and 17-year-olds to pre-register, apparently causing a logistics nightmare for election officials, who were forced to create two different voter-registration lists and integrate them when the pre-registered teenagers actually became eligible to vote. So the state went back to the prior rule, which the vast majority of states follow. Justice challenged this decision as well.

To no one’s surprise, given the current Justice Department’s partisan history on voting-related issues, North Carolina’s new voter-ID requirement was also challenged, although that law will not be in effect until 2016.

Incredibly, the Justice Department, the NAACP, and the other plaintiffs claimed that all of these changes were “discriminatory” and violated the Voting Rights Act—a law designed to break down racial barriers to the ballot box. Apparently, in 2015 North Carolina, not being able to register when you are 16, having to register 25 days ahead of time, having only ten days before the actual date of an election to vote, and being required to vote on Election Day in the precinct where you actually live are not only racist, but barriers to voting itself.  Contrast these “conditions” with the ugly discrimination of the early ’60s.

Times have certainly changed. When the racial interest groups sued North Carolina over its reforms, a swarm of lawyers from gigantic law firms donated their services. The Justice Department devoted hundreds of thousands of dollars and man-hours to attack the law. But no witnesses could be found to say they couldn’t vote because of the changes.

The Justice Department also pumped untold thousands of dollars into a database run by a company called Catalist. This database has been populated with data provided by the Democratic National Committee, unions, and other liberal organizations and is used to help them win elections. Catalist’s infrastructure and database are expensive to maintain, but fear not: the Justice Department, in the North Carolina trial and elsewhere, has provided federal tax dollars to its expert witnesses so that they could purchase Catalist’s proprietary data. Yes, federal dollars were used to fund a database that will be used next year to try to win the 2016 election for Democratic candidates.

For all the resources expended, the Justice Department’s entire case was built on speculative claims. Not able to produce a single eligible voter who was or would be unable to vote, the plaintiffs relied on hypothetical statistical arguments to claim that the turnout of black voters would be “suppressed” because they might use early voting and same-day registration slightly more than white voters, and because black voters are “less sophisticated voters.” DOJ experts actually made the borderline racist argument that “it’s less likely to imagine” that black voters could “figure out or would avail themselves of other forms of registering and voting.” That’s a shameful way to enforce a law that was used to protect real victims of real discrimination in the Deep South.

In the end, real statistics destroyed the Justice Department’s case. The reforms the plaintiffs claimed would disenfranchise “less sophisticated” black voters didn’t depress turnout at all. Indeed, in comparison with the 2010 primary, the turnout of black voters actually increased a whopping 29.5 percent in the May 2014 primary election, while the turnout of whites increased only 13.7 percent. The same thing happened in the general election. This knocked the stuffing out of the plaintiff’s discrimination claims.

The Justice Department still holds a thoroughly demeaning view of civil-rights law. It is a view that insists that blacks are incapable of performing basic societal functions, and therefore the law must step in any time they are asked to comply with a simple procedural step to participate in the electoral process. This is not only an abuse of the department’s authority; it’s a misuse of the Voting Rights Act. It should not be tolerated.