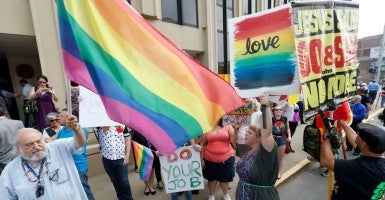 A Kentucky clerk at the center of a national controversy was held in contempt of court and sent to jail for refusing to comply with a judge’s order to issue marriage licenses to same-sex couples.

But she isn’t the only public official who has defied the law over same-sex marriage.

On Thursday, a federal judge ordered Rowan County Clerk Kim Davis to jail because of her refusal to issue marriage licenses to same-sex couples.

After the justices turned down Davis’s appeal, same-sex couples in Rowan county were expected to receive marriage licenses. But today, Davis again refused to issue them.

At a hearing in federal court today, Judge David Bunning ordered U.S. marshals take Davis to jail because she failed to comply with his order.

While Davis continues to refuse to issue marriage licenses to same-sex couples, former government officials at both the local and state level have refused to comply with state laws on gay marriage in the past. However, none were jailed.

The Daily Signal reached out to those officials for comment on Davis’s case and whether they thought she should be in jail.

“We challenge constitutionality of laws on the books all the time,” he continued. “This issue was settled by the judicial process. That’s different than what happened in 2004.”

During his time as state attorney general, Brown decided not to respond to legal challenges of Proposition 8, which stated that “only marriage between a man and a woman is valid.” One of Brown’s responsibilities as attorney general was the defend California and its laws in court.

Brown’s office did not return The Daily Signal’s request for comment regarding Davis’s case.

“I understand that passions are high on both sides of the issue, but we are a nation of laws, and no one can defy an order from a federal judge,” Conway said.

Two years ago, Hanes issued the first marriage license to a same-sex couple despite Pennsylvania’s ban on gay marriage.

Hanes was not available when The Daily Signal contacted his office and did not return requests for comment.

Kane declined to defend the state of Pennsylvania when she was listed as a defendant in a 2013 lawsuit filed by the American Civil Liberties Union regarding the state’s same-sex marriage ban.

“I cannot ethically defend the constitutionality of Pennsylvania’s version of DOMA [Defense of Marriage Act] where I believe it to be wholly unconstitutional,” she said in a statement at the time, according to the Washington Post.

Kane’s office did not immediately return The Daily Signal’s request for comment.

In 2014, Rosenblum said in a filing that challenged Oregon’s ban on same-sex marriage that she wouldn’t defend the state’s ban.

“State defendants will not defend the Oregon ban on same-sex marriage in this litigation. Rather, they will take the position in their summer judgement briefing that the ban cannot withstand a federal constitutional challenge under any standard of review,” she said in the filings.

Rosenblum’s office did not return The Daily Signal’s request for comment regarding Davis’ case.

Following legal challenges to California’s Proposition 8, which prohibited marriage between same-sex couples, Harris decided not to defend the state law.

“I declined to defend Proposition 8 because it violates the Constitution. The Supreme Court has described marriage as a fundamental right 14 times since 1888,” Harris said in a 2013 statement. “The time has come for this right to be afforded to every citizen.”

Harris’s office did not immediately return The Daily Signal’s request for comment on Davis’s case.

In court filings, Madigan said her office “respectfully respects the right to intervene in this case to present the court with arguments that explain why the challenged statutory provisions do not satisfy the guarantee of equality under the Illinois Constitution.”

The Daily Signal was not able to reach Madigan for comment on Davis’s case.

In 2014, Masto argued that due to new court rulings, the “legal landscape” regarding same-sex marriage has “changed,” and that the state of Nevada could no longer defend a ban.

“After thoughtful review and analysis, the State has determined that its arguments grounded upon equal protection and due process are no longer sustainable,” Masto, who is currently running for the Senate, said in a statement.

Masto’s Senate campaign did not return The Daily Signal’s request for comment.

After voters elected Herring attorney general in 2013, Herring told NPR he would no longer defend the state’s ban on same-sex marriage.

“As attorney general, I cannot and will not defend laws that violate Virginians’ rights,” Herring said. “The commonwealth will be siding with the plaintiffs in this case and with every other Virginia couple whose right to marry is being denied.”

The Daily Signal could not reach Herring’s office for comment on Davis’s refusal to issue marriage licenses to same-sex couples.