The Truth About Wages in Right-to-Work States 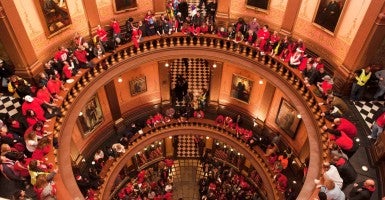 A new report by The Heritage Foundation shows that private sector wages are not reduced in right-to-work states. (Photo: James Fassinger/Reuters/Newscom)

Private sector wages are not reduced in right-to-work states as union advocates have argued, according to a new report released Tuesday by The Heritage Foundation.

James Sherk, a research fellow in labor economics at The Heritage Foundation and the author of the study, cited an Economic Policy Institute paper that claimed right-to-work laws reduce wages by 3 percent.

Sherk found the conclusions “fundamentally flawed” because the study only partially accounted for the cost of living differences across states. He said this is a problem because companies in states with higher costs of living pay their employees higher wages to account for steeper expenses.

Once cost of living was accounted for in the Heritage study, Sherk said EPI’s results “disappeared” and right-to-work laws had no effect on private sector wages.

Sherk’s study did find government employees make about 5 percent less in right-to-work states, but he attributed this to government unions’ ability to affect wages by electing “political allies” who will give them “favorable contracts.”

“All of these arguments of right-to-work wages really evaporate when you look under the hood of all these studies,” Sherk said.

Though more than three-quarters of Americans believe union membership should be voluntary, 25 states still have compulsory unionization.

Vincent Vernuccio, the director of labor policy at the Mackinac Center, said at a panel hosted at The Heritage Foundation Tuesday that after Michigan passed a right-to-work law in December 2012 its unemployment rate dropped largely because company site selectors were no longer eliminating the state for its compelled union laws.

He said in May 2013, Michigan added 6,000 manufacturing jobs while Illinois, a compelled union state, lost 2,000 that same month.

“The right-to-work states are gaining these jobs the forced unionism states are losing,” Vernuccio argued.

Republican state Rep. Chris Kapenga of Wisconsin said he immediately saw positive impacts after his state passed a right-to-work law this past year.

He said Wisconsin had the highest growth of manufacturing jobs out of any metro area in the U.S. over the past year and was ranked third in the nation by “Manpower” magazine for its “bright job outlook,” which he attributes in part to the state’s move toward a workers’ choice environment.

“Right-to-work is good for the state and I think it’s good for the nation as a whole because it gets back to the individual liberty and freedom of a person to choose if they want to associate or not,” Kapenga said.