This Obamacare Co-Op Was Supposed to Make Money. Instead, It Lost Over $15 Million. 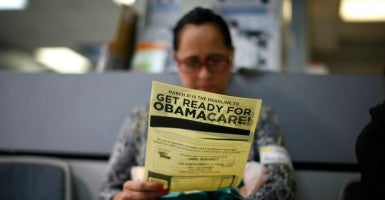 The Nevada Health Co-Op announced last week it would be closing its doors at the end of 2015. The co-op, one of 23 started under Obamacare, received $65.9 million in loans from the Centers for Medicare and Medicaid Services. (Photo: Lucy Nicholson/Reuters/Newscom)

A Nevada health insurance provider that received more than $65 million in taxpayer-funded loans from the federal government announced last week that it is discontinuing operations at the end of the year.

The Nevada Health Co-Op will close its doors beginning Jan. 1 because of “challenging market conditions.” The co-op will be the third of the 23 consumer-oriented and operated plans created under Obamacare to shutter.

“It is with deep sadness that based on challenging market conditions, the board made a painful decision to wind down operations of the Nevada co-op at the end of this year,” Stacey Hatfield, a member of the co-op’s board, said in a statement. “Rather than spending resources on next year’s uncertain market, we would rather make sure we protect our current members. This is all about providing the most affordable, effective health insurance and service possible.”

Co-ops were created under Obamacare to foster competition in areas where few carriers offered plans. The Nevada Health Co-Op was created in 2012 along with 22 others serving 26 states. They began providing insurance coverage in 2014, with Obamacare’s first open enrollment period.

The 23 co-ops received $2.5 billion in loans from the Centers for Medicare and Medicaid Services to help get off the ground and remain solvent. The federal government awarded the Nevada Health Co-Op $65.9 million in startup loans. It’s unclear whether the co-op will be able to repay the loans.

According to the Nevada Health Co-Op, it enrolled 14,000 consumers in 2014. However, the nonprofit insurer projected it would enroll 33,748, according to a July audit of co-ops from the Department of Health and Human Services inspector general.

>>> Under Obamacare, Uninsured Rate Fell to Lowest Level in 50 Years. Why There’s More to That Number.

The analysis from the Department of Health and Human Services also found that the Nevada Health Co-Op projected that it would make $371,000 in 2014. However, it lost more than $15 million.

“The biggest problem that they’ve got is that they can’t raise the capital they need to sustain initial operating deficits,” Ed Haislmaier, a senior research fellow in health policy at The Heritage Foundation, told The Daily Signal. “The government created the nonprofit cooperatives in such a way that there’s just no way for the cooperatives to get access to capital other than a government loan or subsidy.”

The Nevada Co-Op was not the only nonprofit insurer to lose money in 2014. Of the 23 co-ops started in 2012, just one—Maine Community Health Options—was profitable. Additionally, 13 of the 23 co-ops enrolled significantly fewer consumers in 2014 than projected.

“They’re constrained,” Haislmaier said of the co-ops. “It was a badly done attempt to reinvent the wheel with some genius deciding to make it oval instead of round.”

The co-op will continue providing coverage to its customers through the end of the year, but customers will have to purchase coverage from other health insurance companies for 2016. The Nevada Health Co-Op will continue to pay customers’ medical claims.

In addition to Nevada’s nonprofit insurer, two other co-ops created under Obamacare announced they would be discontinuing operations.

Last month, the Louisiana Department of Insurance announced that the Louisiana Health Cooperative would be closing its doors at the end of 2015. The Louisiana co-op received $65.8 million in taxpayer-funded loans from the Centers for Medicare and Medicaid Services.

In March, CoOportunity Health was liquidated after it reported higher medical claims than anticipated. The Centers for Medicare and Medicaid Services awarded CoOportunity with $145 million in loans.